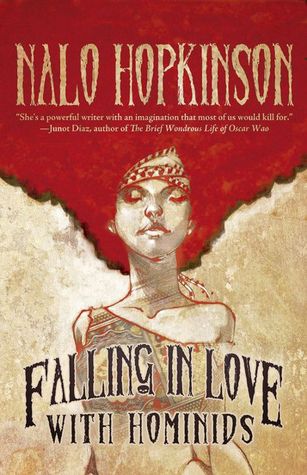 Nalo Hopkinson (Brown Girl in the Ring, Skin Folk) has been widely hailed as a highly significant voice in Caribbean and American fiction. She has been dubbed “one of our most important writers,” (Junot Diaz), with “an imagination that most of us would kill for” (Los Angeles Times), and her work has been called “stunning,” (New York Times) “rich in voice, humor, and dazzling imagery” (Kirkus), and “simply triumphant” (Dorothy Allison).

Falling in Love with Hominids presents over a dozen years of Hopkinson’s new, uncollected fiction, much of which has been unavailable in print. Her singular, vivid tales, which mix the modern with Afro-Carribean folklore, are occupied by creatures unpredictable and strange: chickens that breathe fire, adults who eat children, and spirits that haunt shopping malls.

I’ve been meaning to read Nalo Hopkinson’s work ever since she was the Guest of Honour at the Australian National Science Fiction Convention in 2013. This collection of short stories was the perfect starting point. It showcases the breadth of her talent through a wide variety of stories. Genres range from fantasy and magical realism to soft sci-fi and alternate history.

Diversity is a strong feature of this collection; the characters are even more varied than the genres. The protagonist of the very first story is a young disabled black girl and the rest of the stories contain all sorts of characters. Some are people of colour, some are queer, some are both. Occasionally this diversity is the point of a story. For example Shift reworks Shakespeare’s The Tempest into an interesting meditation on perceptions of black masculinity. However, more often diversity is incidental. I was particularly delighted by Emily Breakfast, which throws in casual mentions of queerness and kink into a story of fantastic domesticity.

Hopkinson has a way with language and this was particularly noticeable in her descriptions of bodies. She throws away narrow cultural definitions of beauty in favour of showing how bodies of all shapes and sizes can be desirable.

As is usual in any collection or anthology, not all of the stories appealed to me. In the introduction, Hopkinson mentions the bleak outlook she held on humanity when she was younger. This perspective definitely shows up in some of the stories, particularly the earlier ones, and didn’t especially appeal to me. I prefer optimistic stories and fortunately still found plenty to delight. Along with the two mentioned above, some particular favourites were:

The Smile on the Face: A teenage girl comes to terms with the cruelty of adolescence and her feelings about her body with a little assistance from her mother’s favourite myth.

Old Habits: A shopping centre is haunted by the ghosts of those who have died within and who are forced to relieve their death daily. A moving story about human dignity.

A Young Candy Daughter: The Christmas spirit manifests in a young girl with extraordinary abilities.

Falling in Love with Hominids is a though-provoking collection and one that will linger with the reader for a long time.

6 thoughts on “Falling in Love with Hominids by Nalo Hopkinson”