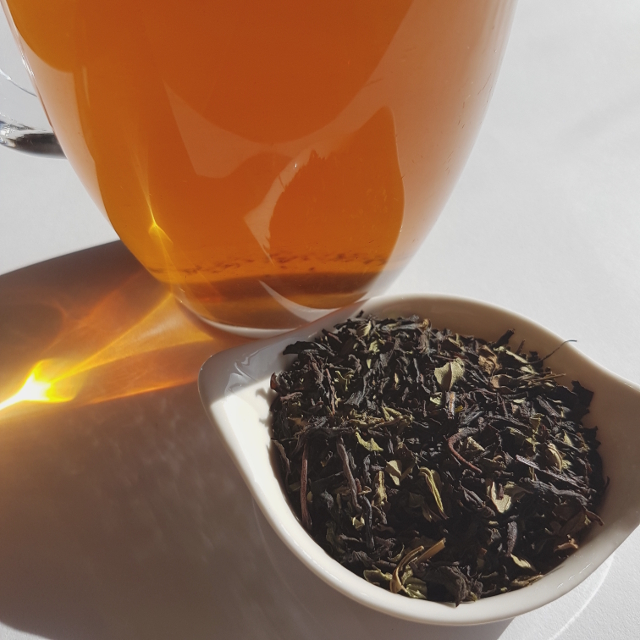 Loose-leaf Links is a feature where I gather together the interesting bits and pieces on sci-fi, fantasy and romance I’ve come across and share them with you over tea. Today’s tea is Mint Slice from Adore Tea. This refreshing black tea is as delicious as it sounds.

The Los Angeles Review of Books takes a look at the genre of solarpunk with particular attention to Sunvault, edited by Phoebe Wagner and Bronte Christopher Wieland.

It has been a busy time for awards. Over the weekend, the winners list for several awards were announced, including the Aurealis Awards, the Ditmar Awards and the Sir Julius Vogel Awards. Congratulations to all the winners and nominees!

The winner of the 2017 Tiptree Award was also announced last month, along with the honours list.

In awards yet to come, the shortlists for the Hugo Awards were released this weekend. RIP my Mt TBR.

Congratulations to Angela Slatter, whose novel Vigil was nominated for the 2018 International Dublin Literary Award. The winner will be announced 13 June.

And lastly, the Romance Writers of America announced the finalists for the 2018 RITA and Golden Heart Awards.

Riptide Publishing, one of the biggest publishers of LGBTQIA romance, has been in the news for all the wrong reasons this month. It started when it was revealed that one of their most prominent authors, Santino Hassell, was a fake persona that had been used to con fans out of money and engage in abusive behaviour. The Salt Miners has a fairly thorough summary of the whole, complicated debacle. Riptide–and, in particular, Editorial Director Sarah Lyons–came out firing at aggrieved fans, only to back down in the face of overwhelming evidence. They issued an apology and terminated their contracts with Hassell.

Within the week, Xen X Cole McCade spoke up about the hostility he’d experienced as a PoC working for Riptide and the inappropriate behaviour of Sarah Lyons. Lyons resigned shortly afterwards and Riptide issued another apology–one which came under fire for its problematic attitude towards sexual harassment in the romance industry. It’s just the most recent incident in a long history of bigotry attached to Riptide, as Courtney Milan demonstrates with this incomplete list of racist issues in which Riptide has been involved. Riptide has pledged to reform, but it remains to be seen if this is anything but lip service.

In more exciting news, Continuum currently has put out a list of potential panels and has issued a call for panel members. Continuum will take place in Melbourne on 8-11 June.

Following on from the announcement of the RITA finalists, the Romance Writers of America have released a statement regarding the board’s commitment to inclusivity and the dismal representation of PoC among the nominees and winners of the awards.

In the wake of the romance industry’s issues with equity, romance author Courtney Milan highlighted a new website being set up to promote and support queer PoC romance authors.

Uncanny Magazine is open for poetry submissions until 3 April.

Mithila Review is looking for story and comic submissions for the anthology India 2049: Utopias and Dystopias. Stories up to 12K and comics up to 24 pages. The deadline is 30 April.

A reminder to keep an eye on the Facebook page for the Australian Science Fiction and Fantasy Writers’ Association for a host of markets looking for submissions.

Over at Tor.com, Sean Grigsby shares a firefighter’s guide to fighting dragons.

Crimson Romance, a division of Simon & Schuster specialising in paranormal romance (among other romance subgenres), have announced they’re closing down.

Rose Lemberg will be editing an anthology of speculative poems honouring Ursula Le Guin. The book will be published by Aqueduct Press and will have a period of open submissions in May (so get ready, poets!).

If you love sci-fi YA and are looking to grow your Mt TBR, Sarah Nicolas has 100 books to look for.

With less than a month to go until Dewey’s Readathon, it’s probably time to start preparing. Fortunately, Tiffany Hall has your back with these 5 tactics to help you make it through a 24-hour readathon.