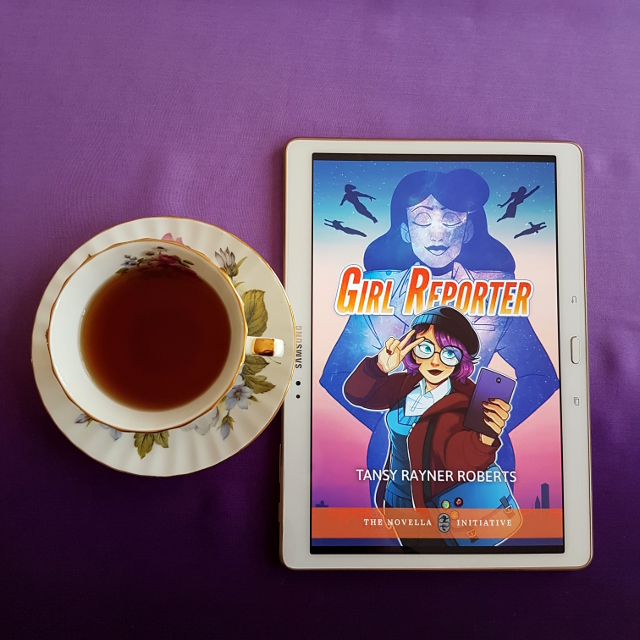 From the award-winning author of Cookie Cutter Superhero and Kid Dark Against the Machine comes a brand new novella about girl reporters, superheroes, and interdimensional travel

In a world of superheroes, supervillains, and a machine that can create them all, millennial vlogger and girl reporter Friday Valentina has no shortage of material to cover. Every lottery cycle, a new superhero is created and quite literally steps into the shoes of the hero before them–displacing the previous hero. While Fri may not be super-powered herself, she understands the power of legacy: her mother is none other than the infamous reporter Tina Valentina, renowned worldwide for her legendary interviews with the True Blue Aussie Beaut Superheroes and her tendency to go to extraordinary lengths to get her story.

This time, Tina Valentina may have ventured too far.

Alongside Australias greatest superheroes–including the powerful Astra, dazzling Solar, and The Dark in his full brooding glory–Friday will go to another dimension in the hopes of finding her mother, saving the day, maybe even getting the story of a lifetime out of the adventure. (And possibly a new girlfriend, too.)

Girl Reporter is a delightful novella that has a serious side beneath the bright, spandex-covered fun.

Friday Valentina is a new media reporter with a successful YouTube channel focused on the antics of Australian superheroes. She follows in the footsteps of her mother, Tina Valentina, who was the first Australian reporter ever to gain an interview with a superhero. I loved the relationship between these two characters. There are problems between them: Tina is often absent for work and doesn’t always treat Friday’s vlog like real journalism. But there is genuine affection between them and I loved their frank conversations about sexuality and journalistic ethics.

Readers of the previous stories in the series will be delighted to know that Joey from Cookie Cutter Superhero and Griff from Kid Dark Against the Machine both make appearances. Seeing them create bonds with other characters was such a delight and plays into the theme of found family. However, it’s not necessary to have read the previous stories–the pertinent details are covered in a way that reads very naturally, particularly since time has passed between the previous stories and Girl Reporter.

It’s also a story with Australian fingerprints all over it. It’s in the names of the superheroes. For example, one of Australia’s earliest superheroes was called Redback (I kind of want that story now), and even Solar has an Australian ring to it. There’s tons of references to 80s Australian news outlets, especially current affairs TV shows and gossip magazines. There was also a description of a hippy-ish town that had me grinning in recognition and Tansy’s trademark snark kept me chuckling throughout (I may have startled my partner a few times while reading this).

But the story wasn’t all fun and games. It touches on Australian issues of race, in a way that is difficult to discuss without spoilers. I felt it was well handled and one of the most poignant moments of the story.

One of the key themes of the story was about handing down responsibility to the next generation and it was fun to see that play out a number of different ways.

Overall, I found Girl Reporter heartwarming and witty. I very much look forward to more set in this world.