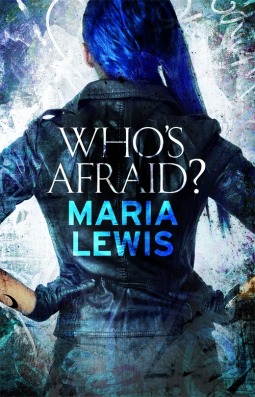 This is the story of Tommi, a young Scottish woman living an ordinary life, who stumbles violently into her birthright as the world’s most powerful werewolf. The sudden appearance of a dark, mysterious (and very attractive) guardian further confuses her as her powers begin to develop and she begins to understand that her life can never be the same again. The reader will be swept up in Tommi’s journey as she’s thrown into the middle of a centuries-old battle and a world peopled with expert warriors and vicious enemies – this is the start of a series – and a world – you will fall in love with.

While it’s not without its problems, Who’s Afraid? is some of the best urban fantasy I’ve read in a while. It falls squarely within its genre but nevertheless manages to avoid many of the common pitfalls.

Tommi is a great character. She’s sensible as well as sassy, thus managing to avoid the slide into irritating. Like most people, she makes mistakes and decisions that are not exactly wise. Yet even when she does so, she never entirely abandons common sense and takes precautions when it comes to risky situations. For example, when she goes to visit strangers in a house on the edge of town, she texts her best friend the address in case something happens.

In this way, Tommi reflects the groundedness of the story as a whole. Like most urban fantasy heroines, she has physical attributes that mark her as different–in Tommi’s case, it’s her blue hair. However, this is not because Tommi is a special snowflake who was born that way (being a werewolf is surely enough on that front!), but because she dyes it, making it a conscious style decision for her.

The groundedness also manifests in the romance. The characters don’t make the best impression on each other at first. Even once they get past that, it’s a slower burn than I generally see in urban fantasy. I enjoyed it all the more for that.

The casual diversity also delighted me. A number of minor characters are mentioned as having same-sex spouses and there’s a bit of a mix of races. Tommi herself is half Maori.

Which leads me to one of the reservations I had about the book. Although Tommi is half Maori, she has been brought up in Scotland, away from her Maori heritage. The portrayal of that part of her family is problematic for spoilery reasons. I was disappointed not to see it balanced out with a more positive portrayal of the Maori, particularly because it leaves me feeling like the story is only paying lip-service to diversity rather than truly being inclusive of cultures that are different. I also wasn’t sold on Tommi’s reasoning for seeking out her Maori father, especially since she believes he raped her mother.

It is also worth noting that if sexual assault is a trigger for you, it may be best to steer clear of this book. While I felt the incident was handled with maturity, it combines with Tommi’s age to take this book into New Adult or adult categories rather than YA.

Overall, I very much enjoyed Who’s Afraid? I’ve not seen any strong indications outside of the blurb that this is going to be a series. However, the way has been left open and I am very keen to see more.

One thought on “Who’s Afraid? by Maria Lewis”