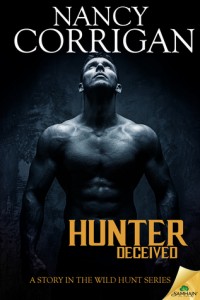 Every day, Harley fights the urge to embrace the dark heritage that could turn her Unseelie. Evil. “Bad.” A nightmarish monster like the ones that wiped out her family. The only thing keeping her on this side of Seelie is a promise made to the ghostly man who saved her that terrible night.

Whenever she’s tempted, she calls up a vision of his eyes. Hears his voice calling her back from the brink of madness. Years later, when she returns to the scene of her living hell, he’s her only hope for salvation.

Calan, the leader of the Wild Hunt, was created to protect mankind from the Unseelie Court, not love one of them. He never expected the rightness he felt with her all those years ago would explode into desire.

But saving her from a fate she can’t escape could damn them both…and leave the world open for destruction.

Hunter Deceived is a steamy paranormal romance but not one that worked for me. It is set in this world but the supernatural elements are a strange mishmash of a number of different mythologies–at a glance I can see Celtic, Norse, Christian and Roman. There didn’t seem to be any logic in the way parts of these mythologies were selected or brought together; it was more as if the author snagged whatever she thought sounded cool and ignored the rest. I wasn’t sold on the result, though I did enjoy her modern interpretation of redcaps. They definitely had the right levels of menacing while fitting in well with current society.

There were also a number of other tropes I’m not really fond of. Calan is an alpha male type. He’s happy to order Harley around without giving her enough information to make a proper decision but when his father does the same to him he gets rather stroppy. It’s a good thing he’s such an amazing lover, or else I’d have no idea why Harley kept him around.

Except they’re in love. The insta-love trope is also one I’m not fond of–especially when love and lust are confused, as they seem to be here. The very first time they meet, Calan is invisible (except for his eyes) and manages to grope Harley within the first five minutes. Of course it must be a match made in heaven (or something) and the memory haunts them both for the next nine years.

I enjoyed that Harley showed a modicum of caution about their reunion. Not only does it take her nine years to return to the scene of her family’s slaughter, she doesn’t rush to Calan’s side the minute she knows where to find him.  She was a bit too willing to swoon over him after that, so I was glad to see her make up her own mind in the end.

The sex was steamy and plentiful, especially in the first half of the book. However, overall Hunter Deceived was not my cup of tea.