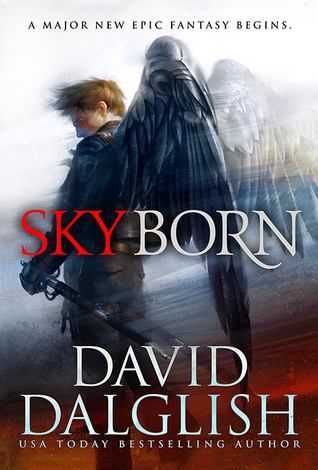 The last remnants of humanity live on six islands floating high above the Endless Ocean, fighting a brutal civil war in the skies. The Seraphim, elite soldiers trained for aerial combat, battle one another while wielding elements of ice, fire and lightning.

The lives of their parents claimed in combat, twins Kael and Breanna Skyborn enter the Seraphim Academy to follow in their footsteps. There they will learn to harness the elements as weapons and fight at break-neck speeds while soaring high above the waters. But they must learn quickly, for a nearby island has set its hungry eyes upon their home. When the invasion comes, the twins must don their wings and ready their blades to save those they love from annihilation.

Skyborn was not my cup of tea. It has some interesting concepts but I found the characters flat and difficult to connect to.

The story kicks off with a battle between Seraphim: aerial soldiers who utilise mechanical wings to fly and fight with elemental energy stored in prisms. It’s an action-packed beginning, but one that struggles under the weight of all the worldbuilding jammed into it. The stakes are high for Breanna and Kael, whose parents serve in the defending army. However, those stakes might as well not exist for the reader, who doesn’t get to meet the older Skyborns until Breanna’s mother dies in her arms. Without any kind of emotional connection, the sequence reads as a series of tropes solely designed to deliver information about the world.

Perhaps I am being too harsh, because it does serve as a nice introduction to Breanna and Kael. Despite being told to stay with their aunt, Breanna sneaks out to watch the battle. While she dangles her legs off the edge of their floating island home, Kael sits back at safer distance. Inevitably, Breanna’s recklessness gets them caught up in the battle and she doesn’t endear herself by abandoning her brother when he, frightened, takes shelter.

The symbolism in the book isn’t exactly subtle. For example, the Skyborns grow up in Lowville, a community of earth-bound farmers and fishermen on graceless wings. When tested for their affinity to the elements, reckless Breanna shows a strong connection with fire while cautious Kael ends up with ice and light.

I found the relationship between the twins was the most interesting aspect of the story. Alternating chapters (from a close third-person point-of-view) allow us to see things from the perspective of both Breanna and Kael. This slowed down the pace of the story because it meant developing two protagonists instead of one; the twins might attend the academy together but their lives are, for the most part, fairly independent of each other. I liked this. It meant that there was always one twin to take the place of the rising star at the academy–and it changed as the story progressed. Best of all, neither of the twins was resentful of their sibling in the limelight. They may sulk a little or have their own worries to contend with, but they were never hateful and their relationship always remained supportive (with the plot-driven exception of the prologue).

As I mentioned, the pace is slow at first but picks up a bit past halfway, once the world and characters have been established. My interest picked up a little with the pace, but I often found myself skimming through paragraphs of description.

On the whole, Skyborn is a readable story but not an especially engaging one.