If you’ve taken a peek at my bio, you’ll know that the Canberra Speculative Fiction Guild is a community that has supported me in manyways. One of those ways involved giving me a chance to edit my very first anthology. Today I’ve invited former president and current editor Ian McHugh to share some of his experiences with this community.

Elizabeth asked me to write this post for her community blog series, on how community has helped and hindered us in pulling together CSFG’s forthcoming anthology, The Never Never Land. It’s a topic Elizabeth knows a fair bit about, having edited Winds of Change, the anthology before the last one, which was Next – although the Next anthology isn’t to be confused with the one that’s currently forthcoming, that’s The Never Never Land…

A moment of your indulgence, if you please, for an explanatory digression: Thanks to our esteemed comrades, the good Doctors Simon Petrie and Rob Porteous, we are forever constrained from calling any future anthologies the next one, because Next was the last one. This means that Winds of Change, as the anthology before the last one, is also the anthology before Next. Which is not to say that it’s the current forthcoming one, which is The Never Never Land, being the anthology after Next and, therefore, the one that’s immediately forthcoming.

How has community helped us with The Never Never Land?

Well, CSFG’s anthologies wouldn’t exist without the community of writers and editors in the Greater Canberra region (draw a triangle from Melbourne to Hanoi to Vancouver and you’ve about covered it). Community is what makes these books happen and community is the reason why they happen.

CSFG’s anthologies exist primarily as a development exercise for our members. Which is not to say that they’re a sheltered workshop, because those don’t develop anyone. What I mean is, if not for that underlying purpose, we probably wouldn’t do them.

Each anthology is edited by one or two members of the group (we had three for The Never Never Land, but lost one, which was careless, admittedly, but we knew starting out that we were more lackadaisical than most so that’s why we packed a spare). The editors choose a broad theme for the book and then go out to the open market of Australian writers for submissions.

This means that, when CSFG members submit stories for the anthologies, they’re competing against writers from all over the country. Typically, somewhere around a third of each book is comprised of stories by members. A surprising number of those are first or second publications from new writers in the group. Many of those member stories are workshopped in CSFG’s monthly critiquing circle. The editors exclude themselves from crit circle, though, and submissions are de-identified so that members really are having to compete as they would in any other market.

Nicky Rowlands’s story “On the Wall” from the Next anthology (the last one, not the forthcoming one) was her first publication and was one of four stories from that book selected for The Year’s Best Australian Fantasy and Horror 2013. CSFG’s reputation as a community keeps attracting good new writers, and that community, focused on nurturing its members, helps them to keep getting better at what they do.

Leife Shallcross, our current President, is another good example. Leife sold her first story to Elizabeth for Winds of Change (the anthology before Next, the last anthology), her third to Simon and Rob for Next (the last anthology) and her most recent publication is in volume three of The Apocalypse Triptych, co-edited by John Joseph Adams (Lightspeed, Nightmare Magazine). There’s four more CSFG members with first sales in The Never Never Land: Angus Yeates, M. James Richards, Rivqa Rafael and Linh T. Nguyen.

Community helps us with the other two thirds of each book, too. Established writers (members and non-members) like Thoraiya Dyer, Charlotte Nash, Cat Sparks, Claire McKenna, Martin Livings, Janeen Webb, Alan Baxter, Richard Harland, Carol Ryles, Maxine McArthur, Donna Maree Hanson, Nicole R. Murphy (those names are just from the forthcoming anthology, the last one, and the one before Next) think enough of our books and what we’re doing to send us stories, even though we’re only paying about six cups of overpriced coffee.

Everything that needs to be done to make one of our anthologies happen relies on community. Aside from editing, that includes wrangling submissions, proofing, typesetting, marketing and selling: all done by members of the group volunteering their time. That also means that producing the books can be susceptible to life happening to the people who’ve put their hands up. Life has seemed to happen rather a lot to The Never Never Land. At moments it’s felt like we’re Sideshow Bob, surrounded by a circle of rakes. I’m making light of it, but a number people have made their contributions to this book in spite of particularly difficult and demanding circumstances elsewhere in their lives.

CSFG’s anthologies happen because of the community that contributes to making them, and community is the reason why we make them. 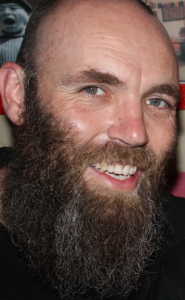 Ian McHugh’s debut short story collection, Angel Dust, was shortlisted for Best Collection at Australia’s Aurealis Awards in 2015. His work has appeared in publications including Asimov’s Science Fiction,
Analog Science Fiction and Fact, Beneath Ceaseless Skies, Urban Fantasy Magazine and the Clockwork Phoenix anthologies. You can find all of Ian’s past publications either in Angel Dust or at ianmchugh.wordpress.com. Ian is co-editor of the Canberra Speculative Fiction Guild’s forthcoming (but not Next) anthology,The Never Never Land.