You are here: Home > Thornbound by Stephanie Burgis 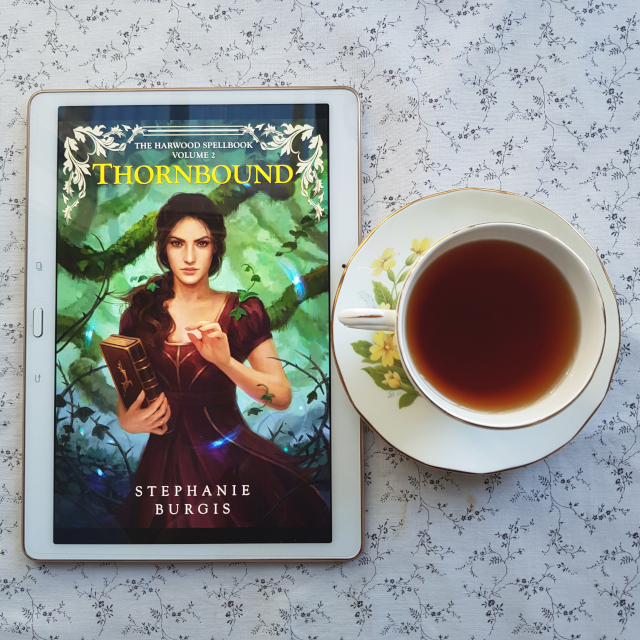 Disclaimers: I was provided with a free copy of this book in exchange for an honest review.
This review contains spoilers for previous volumes/books.

Cassandra Harwood scandalized her nation when she became the first woman magician in Angland. Now, she’s ready to teach a whole new generation of bright young women at her radical new school, the Thornfell College of Magic

Until a sinister fey altar is discovered in the school library, the ruling Boudiccate sends a delegation to shut down Thornfell, and Cassandras own husband is torn away from her.

As malevolent vines slither in from the forest and ruthless politicians scheme against her, Cassandra must fight the greatest battle of her life to save her love, her school, and the future of the young women of Angland.

The first novella in the Harwood Spellbook series, Snowspelled was one of my favourite books of last year, so I was delighted to get my hands on a copy of the sequel. Thornbound does a brilliant job of meeting the standard set by the first book, keeping the thoughtfully feminist themes of the series while advancing both Cassandra’s story and the world itself.

Just as Cassandra is on the verge of achieving her big dream of opening a school for women magicians, things begin to unravel. Her childhood bully arrives as head of the delegation sent to decide if she’ll be allowed to keep the school open. She finds herself saddled with Angland’s most annoying weather wizard as an instructor… who then misses his first class. The Boudiccate have sent her husband running all over the country on urgent business since the day of their wedding. And to top it all off, Cassandra hasn’t had a good night’s sleep since she arrived at the school, thanks to a reoccurring nightmare. It’s enough to leave anyone fatigued and frazzled.

Cassandra continues to make a compelling character. As a trailblazer–both as the first woman magician and as the head of the first school for women magicians–she’s headstrong and stubborn, with a clear idea of what she wants and a reasonably solid plan as to how to bring it about. Going against society’s expectations means she knows the value of appearing confident and relying on her own strength. However, these qualities don’t always serve her well, particularly in her personal life. The story does a fantastic job of pushing back at narratives of the lone hero, noble sacrifices, and, to a degree, protecting loved ones. Instead, it draws out themes of respecting the choices of others, making connections, and not trying to do it all oneself.

I was also delighted to see Cassandra continuing to wrestle with the loss of her magic. All too often, fantasy stories turn to the magic fix, especially when it relates to health and able-bodiedness. While the loss of her magic doesn’t affect her in a physical way, it represents the absence of a crucial part of Cassandra–one that she still grieves over, even as she forges ahead. It forces her to be more resourceful and to rely on others, making her a far more interesting character than otherwise.

The story is set in an alternate Regency period. Many stories set around this era tend to be very white, so it was gratifying to see a reasonably diverse cast. Both Cassandra’s husband and sister-in-law are people of colour who occupy positions of significant power in this world. Racial tensions have been transferred to species instead, with an uneasy truce between the humans and the fey who formerly occupied the land. Naturally, there are some prejudices on both sides and we see some of this play out in Cassandra’s half-fey housekeeper, Miss Birch. Even Cassandra, who has nothing but respect for Miss Birch’s skills, catches herself making disparaging comments about the fey in front of her housekeeper.

Elements of mystery are included, as Cassandra tries to figure out who made the altar to bargain with the fey and what the deal is with the thorny vines both in her dreams and in the waking world. Cassandra is juggling so many balls that it keeps the stakes high and the story moving at a reasonable pace as she reels from one disaster to the next.

On the whole, I found Thornbound just as charming a novella as its predecessor. Its exploration of feminist themes was both thoughtful and satisfying. I’m really looking forward to the continuation of the series.

2 Responses to Thornbound by Stephanie Burgis