You are here: Home > A Glimmer of Silver by Juliet Kemp

A Glimmer of Silver by Juliet Kemp 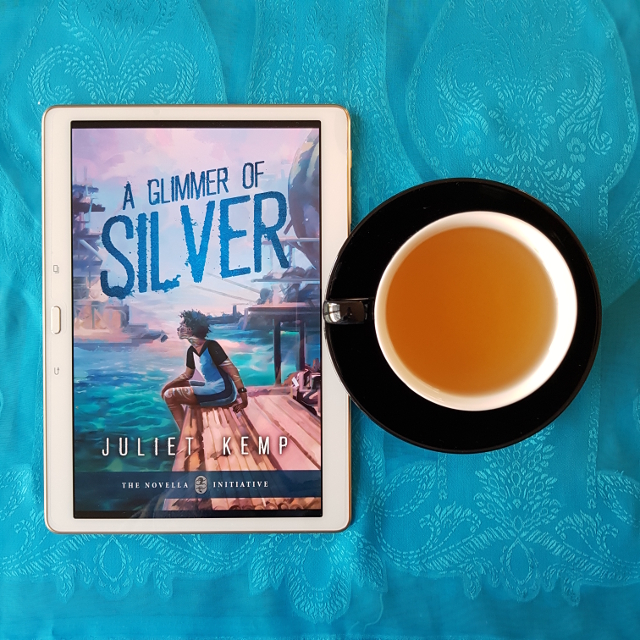 Jennery is floating on xyr back when Ocean speaks for the first time. Just three days away from freedom, all Jennery has ever wanted to do was become a musician–because if you reach sixteen and Ocean hasn’t spoken to you once, then you can pursue a different life instead of becoming a Communicator.

But Ocean speaks to Jennery–only to Jennery. And Ocean is angry. And when Ocean is angry, bad things happen to the humans who have colonized Ocean’s world. Jennery must choose whether to listen or to swim away.

A Glimmer of Silver is a novella about responsibility, growing up, and what happens after first contact.

As is appropriate for a story about a sentient ocean, A Glimmer of Silver is a novella with a lot of depth.

One of the immediately noticeable things about the story is the style. All of the characters are referred to with gender neutral pronouns, leaving the reader to make their own assumptions about the characters’ gender in a similar manner to Ann Leckie’s Imperial Radch trilogy. This is never made a big deal of or even commented on, which, to my mind, is a feature not a bug. More generally, the style tends to the informal, in keeping with a teenage protagonist. There’s a bit of infodumping, but since the story is told in first person, it comes across more as explanation or justification and doesn’t therefore feel out of place.

Another aspect I also liked was that it shows teenagers wrestling with world views and philosophies, trying to come to terms with the world they live in. The story deals with ethics, consent and colonisation, and these are never shown as being issues too advanced for teenagers or even things that teenagers don’t think about. Jennery and her friend Kira are actively seeking their place in this world, thinking about the ways in which their society encourages them to live and finding problems with that. The points of view that are presented aren’t black and white; it’s easy to see where the different characters are coming from and why they might think the way they do.

By taking its teenage characters seriously, the story underlines some of the struggles Jennery faces. Xyr message from Ocean is not one the rest of society wants to hear and so xyr youth and inexperience is used as an excuse not to listen. This kind of misunderstanding and miscommunication happens throughout the novella; there’s a strong emphasis on truly listening, rather than hearing only what one wants to hear.

I didn’t feel a strong emotional connection to this story, instead finding it was the ideas that drew me in. Jennery spends a lot of time feeling frustrated by various circumstances, which was understandable, even if it didn’t resonate with me.

All in all, I found A Glimmer of Silver paints a fascinating world, wrestles with some important issues and doesn’t talk down to its audience.