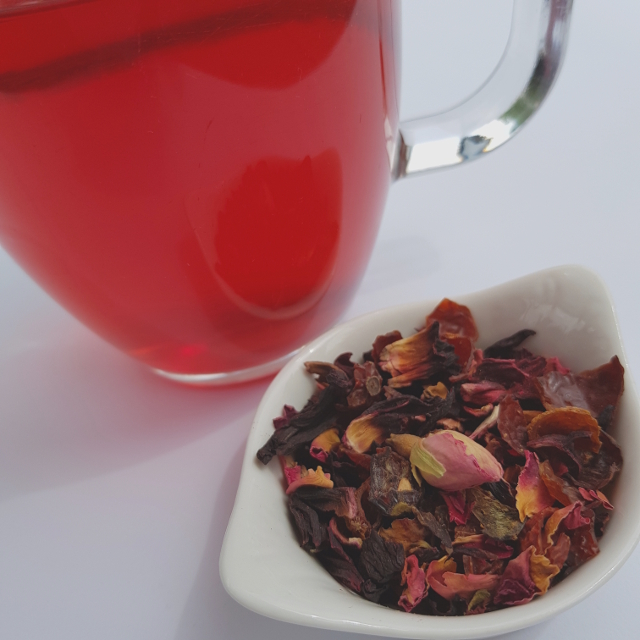 Loose-leaf Links is a feature where I gather together the interesting bits and pieces on sci-fi, fantasy and romance I’ve come across and share them with you over tea. Today’s tea is Ruby Red Rosehip from T2. This blend mixes rosehips, hibiscus and rosebuds. The combination is fragrant and tart, and has become my favourite thing to drink right before bed.

I have been recording once again for the Skiffy and Fanty Show podcast. In case you missed it, I interviewed Sam Hawke about City of Lies and Tansy Rayner Roberts about Mother of Invention. I also joined Trish Mason and Brandon O’Brien for a discussion of the Nommo Award shortlist.

Over at Books and Tea, Christina has an interview with Claudie Arseneault about unconventional romance and Baker’s Thief.

The Tiptree Fellowships are open for applications until 31 October. Emerging creators who are changing the way we think about gender through speculative narrative can apply for one of these $500 grants.

The winners of the 2018 Inky Awards have been announced. These Australian awards for YA fiction are selected by a jury of teenagers and then put to a popular vote.

As reported by File 770, the finalists for the 2018 Parsec Awards have been announced. These awards recognise excellence in speculative fiction podcasting. I’d particularly like to congratulate Rachel from Kalanadi, whose YouTube channel has been nominated for the category of Best Speculative Fiction Fan or News Podcast (General). Rachel also made the longlist for the Hugos this year, the first YouTube channel to do so without being supported by a slate.

Nominations for the Get Up-and-over Fan Fund (GUFF) are open until 5 December. GUFF will be sending one delegate from Australia to WorldCon 77 in Dublin, Ireland next year.

Goodreads did not endear itself to the SFF community by targeting for removal two magazines focused on black speculative fiction: FIYAH and Anathema. Alex Acks has a good round-up of the situation.

Tor.com has a few reports on interesting panels from New York Comic Con, including #OwnVoices in Genre Fiction in 2018 and Intersectional Feminism Across Genres.

Over at Lady Business, forestofglory wonders where all the SFF mums have gone. Some additional answers were provided on Twitter.

S.L. Huang comes to the defence of (female) power fantasies.

If you’re looking to pick up more fantasy written by women, The Fantasy Inn has some suggestions about where to start, including a handy flow chart.

KJ Charles examines the notion of historical accuracy in historical romance, with particular focus on who gets to have happy endings.

Chuck Wendig has been fired by Marvel due to pressure from far-right critics.

A reminder that Twelfth Planet Press are open to novella submissions until 30 November. They’re looking for novellas that are gritty and all about punching the patriarchy in the face.

Fireside Fiction are also open for poetry submissions until the end of the month.

The Science Fiction and Fantasy Writers of America (SFWA) have had some excellent articles on their blog. Firstly, they warn authors to be alert for publishers who fail to finalise contracts. They’ve also been helping Douglas Phillips oppose one of those ridiculous trademarks in the wake of Cockygate. Ethan Ellenberg urges authors to maximise their backlist and also touches on author estates. And don’t forget to check out the SFWA market report for October.

With the countdown on to NaNoWriMo, Sarah Nicolas has 12 books to get you through the challenge.

The sequel to Zen Cho’s Sorcerer to the Crown will be released in March and is titled The True Queen.

Tor Books has released the cover for the second of Sam Hawke’s Poison Wars books. Hollow Empire is going to look just as stunning as City of Lies.

N.K. Jemisin’s book The Fifth Season is being developed as a TV show.

SciFiMonth, a science fiction reading challenge, will be running in November. You will almost certainly see a post from me on this before too long, but if you’d like to get in first sign-ups are open.

Dewey’s 24-hour readathon is taking place this weekend. I’ll probably miss this one, due to a scheduling error on my part, and I’m pretty disappointed in myself.

Over at the Book Smugglers, Foz Meadows writes about accepting imperfect media while still valuing criticism.

Becky Chambers writes about the impact Ursula Le Guin’s The Left Hand of Darkness had on her.