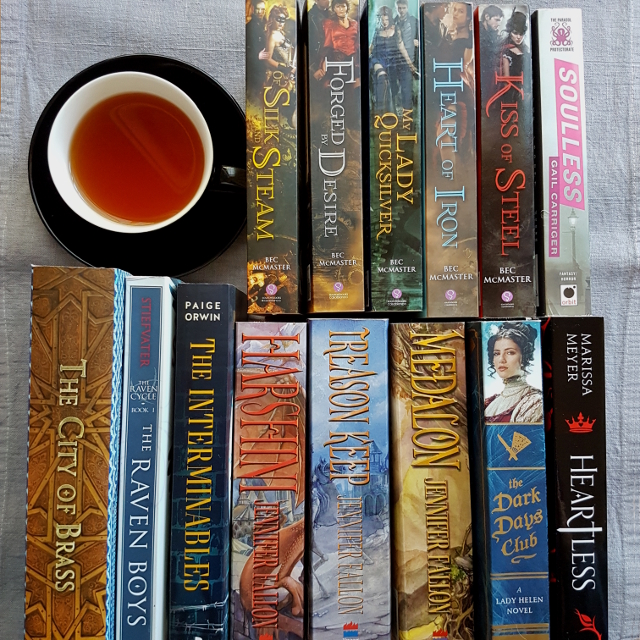 November found me a long way off my reading game. I had some time-consuming personal commitments which chewed into my reading time. And I DNFed two books this month. Combined, it makes for the worst reading month I’ve had all year.

Of course, acquisitions haven’t slowed down at all. I managed to pick up some exciting review books as well as some bargains on sale. And then there was that second-hand book-shopping trip I made with Elanor. Oops.

My other goals were a mixed bag. I’ve had no trouble making one trip to the library this month. However, for the first time this year, I’ve missed reading this month’s piece of fanfiction. I’m a little disappointed in myself, especially considering how close I am to the end of the year.

160. The Iron King by Julie Kagawa. First in the Iron Fae series. When Meagan Turner’s brother is replaced by a changeling, she must go on a quest to rescue him. I usually love books about the fae, but I found this extremely derivative.

161. Paranoia: Players Handbook by James Wallis, Grant Howitt and Paul Dean. Pretty much as it says on the label. Paranoia is a game in which players are clones that live in Alpha Complex. The place is run by Friend Computer who has all of our best interests at heart. Friend Computer wants us all to be on the lookout for traitors, terrorists, secret society members and people with mutant powers. Happiness is mandatory. The manual is relatively concise, though the rules around combat could have used a little more clarity. I was also annoyed that the sample game given on the first page had just one female player in a group of six. *sigh*

163. The Time of the Stripes by Amanda Bridgeman. Reviewed here.

165. An Extraordinary Union by Alyssa Cole. First in The Loyal League series. Historical m/f romance between a former slave and a Pinkerton detective, both working undercover to spy on a Confederate senator. It did an excellent job of balancing the romance with some crunchy issues. I’ll definitely be looking for the next in the series.