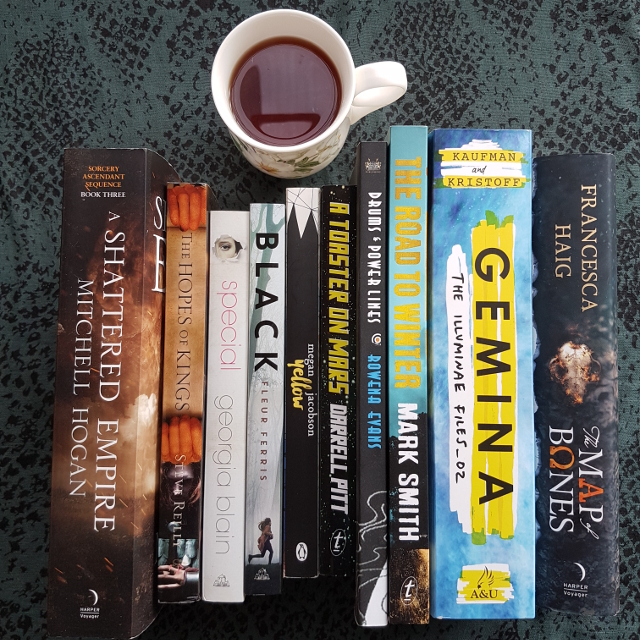 Happy New Year! 2016 was a rough year for many, so I hope 2017 has been kind to you so far. My holiday was lovely and I was glad to spend some time with my family. I also manged to get plenty of reading done, which was a great way to see out the year.

2016 was a record-breaking year for my reading. I managed a personal best 117 books. My previous best was 103 books in 2009. Being a judge for the Aurealis Awards was a good motivator. It also skewed my stats.

I don’t consider YA to be a genre so much as a market. So, taking that out of the equation, my most read genre was fantasy. No surprises there. Romance was my next most popular, with sci-fi a hairsbreadth behind.

Around 75% of the books I read in 2016 were written by women. I read 8 books written by authors of unknown, non-binary or multiple genders, which is about half the amount I read last year.

49% of the books I read in 2016 were written by Australian authors. This is up significantly on 34% in 2015. Judging the Aurealis Awards was surely a factor.

2015 was the first year I started tracking the diversity of the authors I’ve read. 22% of the books I read that year were from authors I consider diverse. It improved slightly to 25% this year, but it’s clear I still need to make some effort in this area.

E-books made up 53% of the books I read in 2016, which is about on par with 2015. In previous years, e-books were at best a third of what I read. This indicates to me there has been a permanent change in my reading habits.

58 of the books I read were published in 2016. The average age of the books I read was 2.71 years. The average tenure on Mt TBR was 162 days. Last year it was 104 days, so I must be getting through a bit of the older stuff. My mean rating (out of 5) was 3.2, which is down a little on last year but suggests I’m still probably being a bit generous with my ratings… or sensible enough to ditch books that aren’t working for me.

These numbers probably don’t mean much to anyone else, but I have such fun keeping track of them throughout the year. I’m looking forward to seeing what 2017 brings.

Books with an asterisk on the list below were part of my #ReadMyOwnDamnBooks effort. I’ll report on the results of that challenge next week.

99. Glass Slipper Scandal by Tansy Rayner Roberts. Read for Aurealis. In the fairytale kingdom of Charming, a rookie reporter and a new palace guard cross paths as the kingdom attempts to marry off troublesome twin princes.

100.A Shattered Empire by Mitchell Hogan. Read for Aurealis. The final book of the Sorcery Ascendant Sequence. When the powerful rulers of two empires clash, Caladan must master his talents and find a way to prevent further bloodshed.

101.Black by Fleur Ferris. Read for Aurealis. Contemporary YA. Ebony Marshall is rumoured to be cursed. Three of her best friends have died over the years and she does her best to keep everyone else at arm’s length. The arrival of a new boy in her small town makes that difficult and soon disturbs old secrets.

102.Special by Georgia Blain. Read for Aurealis. Dystopian YA in which corporations have replaced nations. The rich are genetically designed, while the poor must hope to win a yearly lotto to have a child genetically designed. Fern Marlow is one such child. However, something seems to have gone wrong with this year’s Lotto Girls and Fern must go on the run.

103.The Other Side of Summer by Emily Gale. Read for Aurealis. Contemporary YA. After losing her brother in a bombing, Summer’s family move from London to Melbourne as they try to leave their grief behind. But Summer is unwilling to leave behind her brother’s guitar and soon realises the guitar is no ordinary instrument.

104.The Map of Bones by Francesca Haig. Read for Aurealis. The second inThe Fire Sermon series. A post-apocalyptic YA set after a nuclear disaster. Twin births are the norm with one, the Alpha, being fully able-bodied, and the Omega displaying a mutation or disability. The book explores oppression and sibling rivalry. Cass must confront the full extent of the atrocities perpetrated by her brother.

105.Gemina by Amie Kaufman and Jay Kristoff. Read for Aurealis. The second inThe Illuminae Files. When a team of assassins arrive on jump stationHeimdall, it’s up to the station’s pampered daughter and the nephew of a crime lord to make sure everyone survives.

106.A World of Ash by Justin Woolley. Read for Aurealis. Last book of post-apocalyptic YAThe Territory. As zombies close in on the town of Alice, it’s up to Squid, Lynn and Nim to save the day.

107.A Pirate for Christmas by Anna Campbell *. A lovely break from Aurealis reading. Regency romance. The new Earl of Channing is both Scottish and rumoured to be a pirate. However, Bess is not going to let his reputation scare her out of holding him accountable to his community duties.

108. Her Christmas Earl by Anna Campbell *. Regency romance. After being found trapped in a closet with notorious rake, the Earl of Erskine, Philippa Sanders’s reputation is in ruins. Only a quick marriage can salvage it and Philippa finds the earl surprisingly agreeable.

109.Beyond Shame by Kit Rocha *. Post-apocalyptic erotica. Thrown out of Eden for failing to live up to their strict moral standards, sheltered city girl Noelle won’t last long in the criminal sectors surrounding the glamorous city. Fortunately, she is rescued by Jasper, a lieutenant of the O’Kayne gang. Scorching hot erotica that positively depicts sex, bisexuality and polyamory. More please!

110.Yellow by Megan Jacobson. Read for Aurealis. Kirra’s friends bully her and her mother is an alcoholic. She promises a ghost she will find out who murdered him if he can turn her life around in exchange.

111.Drums and Power Lines by Rowena Evans. Read for Aurealis. After seeking to escape a bully, Ivan unexpectedly finds himself in a world disturbingly close to his own.

112.Argenterra by Donna Maree Hanson. Read for Aurealis. Two girls find themselves in another world filled with magic. While Aria fits right in, Sophy struggles to adjust.

113.A Toaster on Mars by Darrell Pitt. Read for Aurealis. A futuristic detective story in which a special agent gains a new partner he’s not too happy about. Told in a quirky style reminiscent of Douglas Adams.

114.The Troll’s Toll by Kirstie Olley. Read for Aurealis. A fairytale retelling of a princess who is given to a troll when her wastrel father can’t afford to pay the bridge toll.

115.Heart of Brass by Felicity Banks. Read for Aurealis. An alternate history steampunk with magic. When well-bred Emmeline is deported to Australia for theft, she struggles to keep her mechanical heart a secret.

116.The Road to Winter by Mark Smith. Read for Aurealis. Finn has learned to look after himself after a virus wipes out most of Australia’s population. However, things get complicated when a young woman arrives on his doorstep needing help.

117.Heart Hunter by K.S. Nikakis. Read for Aurealis. Fleet is a young hunter in a clan struggling to survive as winter takes a more permanent grip over their lands. When she makes an enemy of the clan’s new oracle, Fleet finds herself sent out into the wilderness to achieve an impossible task that could help the clan survive.

Nominal by Unpretty. Bruce Wayne gets creative with spreadsheets in order to manage his depression. Hilarious and sweet, even if I don’t think depression works that way.