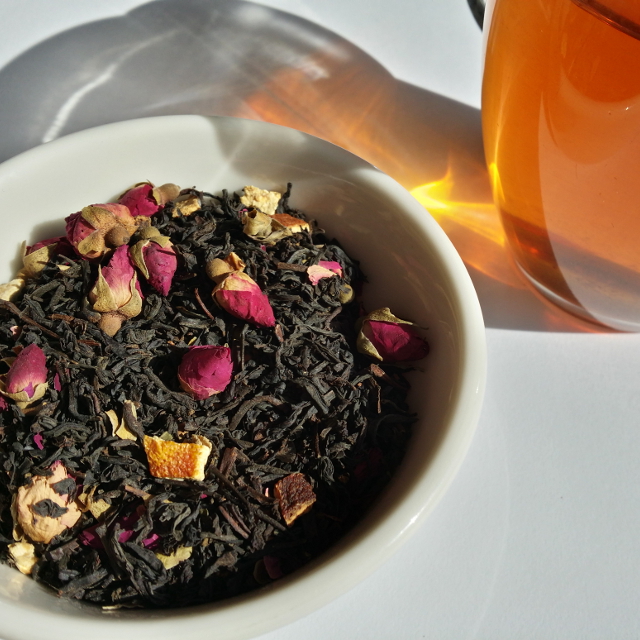 Loose-leaf Links is a feature where I gather together the interesting bits and pieces I’ve come across and share them with you over tea. I missed last fortnight’s post, as I was still recovering from Contact. As a consequence, today’s post is super long (and has reconfirmed for me the wisdom of running them fortnightly instead of monthly).

The tea in the picture is a divine Lady Grey blend from a boutique store in the Hunter Valley called Pokolbin Chocolates and Jam Company. The lemon peel gives it a strong, zesty flavour that I adore.

As mentioned, Contact wrapped up at the end of March. It was a blast, but don’t just take my word for it. Kat Clay has shared her highlights (including a few panels I didn’t make it to). Christine Sun, who sat with me on the Dodging Duggan panel, offers her perspective as a newcomer. And Rivqa Rafael tweeted up a storm all weekend, the results of which are now handily collected in Storify format.

Contact also saw the presentation of a number of awards. First up were the Aurealis Awards, Australia’s juried awards for speculative fiction. There’s a full list of winners and a PDF of the program booklet over on the website. The organising committee also have a call open for the next round of judges (and they already have an email from me).

The Ditmar Awards were presented a few nights later. They represent the best of Australian speculative fiction as voted by fandom. Andromeda Spaceways Inflight Magazine has a list of the winners.

The Tin Ducks, West Australia’s speculative fiction awards, were presented the same weekend. The state produces amazing work and I don’t envy the task voters had in selecting the winners.

In a slightly more literary vein, the 2016 Stella Prize was awarded to Charlotte Wood for The Natural Way of Things. The Stella Prize recognises the contribution of Australian women to literature.

Looking more globally, the winners of the 2015 Tiptree Award were announced alongside an Honours list and a Long list. The Tiptree Award is given to works of speculative fiction that expand or explore concepts of gender.

The British Science Fiction Association presented their annual awards. A shortlist and a list of winners can be found on their website.

And lastly, the finalists for the 2016 Hugo Awards have been released. Jim C. Hines has some analysis of the nominations.

Over on Tor.com, Kate Elliot discusses writing women into epic fantasy without quotas.

Jim C. Hines examines the argument that it is unfair to judge writers of past eras by today’s standards and that we should consider them as men of their times.

There is nothing revolutionary about not reading white men if they’re only replaced by white women.

Zen Cho, author of the excellent Sorcerer to the Crown, examines why she includes her culture in her writing instead of being more Western-centric.

Thanks to Tsana of Tsana Reads and Reviews for pointing me to Diversity in Australian Speculative Fiction: A bibliographical exhibition. My wish list just grew longer.

Another way to expand your reading is to check out this literary map. It features a book recommendation for 196 different countries.

Along similar lines, Bina at If You Can Read This offers 5 recommendations for queer horror.

Or you could try this annotated list of asexuals in fiction.

Sarah Hollowell writes about putting fat girls in your SFF YA.

The Canberra Speculative Fiction Guild  and Conflux 12 are running their annual short story competition. The word count is 4,000, the deadline is 31 July and the theme is red fire monkey. Open to Australian residents only.

Fireside Fiction has Daniel José Older on board as a guest editor and are taking submissions until the end of the month. Flash fiction up to 1,000 words, short stories up to 5,000 words.

Book Smugglers Publishing have announced the editors for their 2016 Speculative Fiction: The Best Online Reviews, Essays and Commentary anthology are Liz Burke and Mahvesh Murad. They are also looking for submissions of non-fiction works related to speculative fiction and published online in 2016. Entries close on 31 December.

Interested in having a Pulitzer Prize finalist read your work? Kelly Link is judging the Fairy Tale Review‘s 2016 Prose contest. Entries can be up to 6,000 words and close on 15 August.

If you keep reassuring yourself that you’ll get around to submitting something, you might be interested in participating on Alison Manning’s research into procrastination.

Hungarian magazine Galaktika have been translating and reprinting stories without permission from the authors. While this breach of copyright is unacceptable, there are also some tricky cultural issues at play here.

Kat Clay invited a few guests to share what they think are the best books about writing genre.

Alis Franklin has just saved me a heap of time by pointing out the global find-and-replace function in Scrivener.

She also offers some thoughts on all the unpaid work expected from writers.

This comes back to the way publishing is structured, specifically that it implicitly assumes that authors will both, a) have day jobs to support themselves financially, and b) have time and resources to devote to performing non-writing activities to promote their books (while also writing their next book and editing their current book).

As part of Women in SF&F Month at Fantasy Café, Charlie Jane Anders argues that Yoda was wrong: anger leads to everything good.

Peter Ball wants you to know there is nothing surprising about a writer being rejected (even J.K. Rowling).

On hearing the news that musician Prince died without a will, Neil Gaiman dug this out of the archives.

Twelfth Planet Press have revealed the cover for Defying Doomsday, an anthology of apocalyptic fiction featuring disabled and chronically ill protagonists. The book will be launched on 30 May and is available for pre-orders. Expect a review here closer to the launch date.

Ticonderoga Publishing have announced that they’ll be releasing Crow Shine, a collection of dark fantasy by Alan Baxter. The launch will take place at Conflux 12, where Alan is a Guest of Honour.

The results for the fourth quarter of Ladybusiness’ 2015 short stories survey is now out. They’ll be changing up the format of the survey for 2016 and will be taking recommendations all year.

Nisi Shawl and K. Tempest Bradford are also taking recommendations for the The Year’s Illustrious Feminist Science Fiction and Fantasy 2015.

If you’re a regular reader here, you know I’m a big fan of reading challenges. So how do I find out about these challenges and keep track of them? Try the Book Blogger Community Calendar.