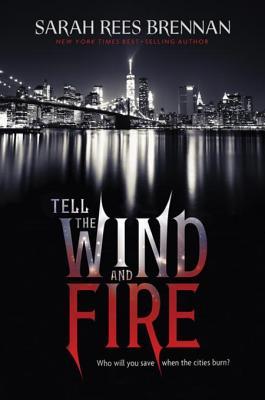 In a city divided between opulent luxury in the Light and fierce privations in the Dark, a determined young woman survives by guarding her secrets.

Lucie Manette was born in the Dark half of the city, but careful manipulations won her a home in the Light, celebrity status, and a rich, loving boyfriend. Now she just wants to keep her head down, but her boyfriend has a dark secret of his own: one involving an apparent stranger who is destitute and despised. Lucie alone knows the young men’s deadly connection, and even as the knowledge leads her to make a grave mistake, she can trust no one with the truth.

Blood and secrets alike spill out when revolution erupts. With both halves of the city burning, and mercy nowhere to be found, can Lucie save either boy or herself?

I’m not a Charles Dickens fan and I haven’t read A Tale of Two Cities. So I can’t comment on how faithful Sarah Rees Brennan has been with this reworking. However, I very much enjoyed the way she has blended together YA fantasy and classic literature.

The promotion around this book has been very strange, omitting any reference to A Tale of Two Cities, perhaps out of concern for spoilers. However, I found the connection an important one to keep in mind. The book certainly stands on its own, but readers expecting straight YA are going to be disappointed. Lucie’s relationship with Ethan Stryker is already well-established before the story begins. While their relationship is key to the plot, this does not make the book a romance. Instead, it’s more about trust and survival.

Lucie is a character not everyone is going to like. She knows the power of image and she uses hers ruthlessly in order to survive: by lying, smiling and staying silent, and, when these don’t work, by taking action. In that sense, she reminded me a lot of Katniss from The Hunger Games. Lucie tries to do what is right but is quick to ditch that when it’s a matter of survival–for herself or for those she loves. It’s her loyalty to the people she cares about that saves her from being unsympathetic.

The book is set in a future New York City. Magic has been discovered and is now used to power almost everything. People born able to use Light magic live in opulence with their families, while those born with Dark magic or to Dark magic families are kept repressed in ghettos. The Light magic users still need the Dark to ease the suffering generated by overuse of Light magic, else they would have done away with the Dark a long time ago. It’s an interesting premise, but one that was a bit weak in places. In particular, the limits on Light magic use were unclear and mostly used as a plot token.

Despite being set in New York City, I never really got a feel for the place or how the Light city and the Dark fit together. Descriptions largely remained vague, perhaps assuming the reader was familiar with the present-day city. On the other hand, this was in keeping with descriptions more generally throughout the book. All we really know of Lucie is that she is blonde and thin; Ethan is tall, dark and handsome; Nadiya wears a hijab and some amazing liquid eyeliner. The reader is given the freedom to fill in the rest.

One thing the book did very well was capture the sense of being swept up in events much larger than the individual. Almost from the start, we see how little power Lucie has over her own life. Her life in the Light city is sustained by the charity of others; she is vulnerable. When things begin to spiral out of control, she paradoxically gains more power, but never quite enough and there are limits on what she–or, indeed, any of the characters–can achieve. She and the people she loves remain vulnerable. If you like tortured heroes, this may be the story for you.

Overall, I enjoyed Tell the Wind and Fire, although it broke my heart in places. I’d particularly recommend it to fans of The Hunger Games, albeit with the caveat that it’s not as action-driven.