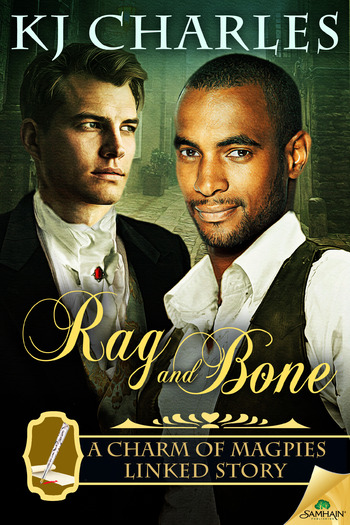 Crispin Tredarloe never meant to become a warlock. Freed from his treacherous master, he’s learning how to use his magical powers the right way. But it’s brutally hard work. Not everyone believes he’s a reformed character, and the strain is putting unbearable pressure on his secret relationship with waste-man Ned Hall.

Ned’s sick of magic. Sick of the trouble it brings, sick of its dangerous grip on Crispin and the miserable look it puts in his eyes, and sick of being afraid that a gentleman magician won’t want a street paper-seller forever–or even for much longer.

But something is stirring among London’s forgotten discards. An ancient evil is waking up and seeking its freedom. And when wild magic hits the rag-and-bottle shop where Ned lives, a panicking Crispin falls back onto bad habits. The embattled lovers must find a way to work together–or London could go up in flames.

This story is set in the world of the Charm of Magpies series.

I was a little apprehensive when I heardRag and Bone was available on NetGalley. Regular readers here will know I was a huge fan of Charles’A Charm of Magpies series. Could Rag and Bone possibly live up to that? Or, worse yet, would it be the same characters in different clothing?

I made the right decision in rushing over to request it. Rag and Bone brings a unique approach to its characters and magic, building on the world of A Charm of Magpies. Lucius Crane and Stephen Day may have faced uncertainty in that series, but they were never anything other than confident in their abilities. So Crispin Tredarloe presents quite a contrast. Having been unknowingly trained to be a warlock, the book opens with him struggling to learn to use his magic legally and failing badly. He is a character who is beaten down, tainted by his former master’s betrayal and barely tolerated by magical society. His life has been sorely lacking in affection, and, while he compensates by being pretty self-centred, even he doesn’t have a very high opinion of himself.

Fortunately, waste-man Ned sees the good in Crispin and exerts a steadying force. Ned is not without his flaws, though–something I very much enjoyed about the book. In his case, he is wont to speak a little too plainly at times. This gets him in trouble with Crispin on occasion, particularly when he makes clear his distaste for all things magical (although he has good cause).

Even the sex between them presents a contrast to the Charm of Magpies series and, indeed, most m/m romance I’ve read. I felt this diversity was very welcome, and builds on what’s already present in the world. It’s not often you get a pregnant Jewish woman in a position of authority or a gay mixed-race relationship in a historical novel.

The magic likewise builds on what has gone before. We get to see a few of the different ways the practitioners of Charles’ world sense magic. This variety was implied in previous books, but here we really get to see it in action. Crispin’s form of magic is also quite a contrast from what has previously been shown, though it also links neatly back to earlier events. I also enjoyed the inclusion of witch bottles as a nicely historical addition to the magic.

Although Rag and Bone does a reasonable job of standing on its own, readers should be aware that it is not the first book featuring Crispin and Ned. Their relationship was established in the short story A Queer Trade, which was first published in the Charmed and Dangerous anthology and is now available separately. There are a lot of cameos from characters featured in other books set in this world, so returning readers will get the most out of it.

4 thoughts on “Rag and Bone by KJ Charles”