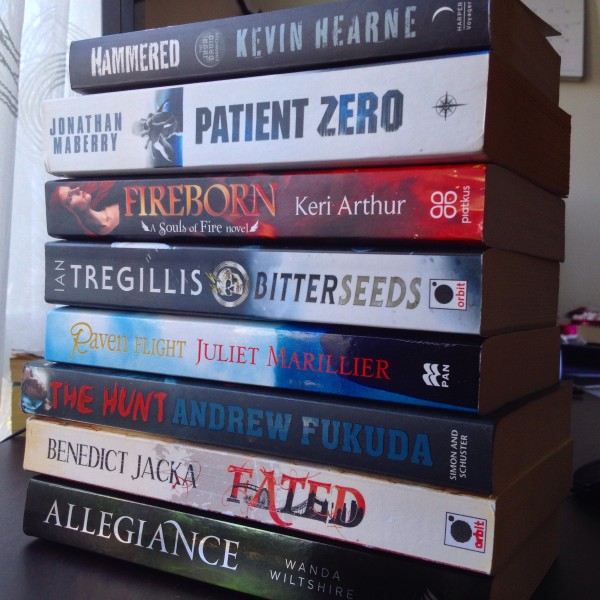 March has me well on the way to a record year in terms of the number of books I’ve read. I think I can safely say that this blog has had a definite impact on my reading patterns. However, as with last month, I’m still acquiring books faster than I’m reading them. The pile in the photo above came courtesy of a giveaway by Katherine of Ventureadlaxre.

14. The Lost Zodiac by Catherine Tennant. A non-fiction book on the astrological properties of constellations not considered part of the traditional zodiac. Too vague to get past my scepticism.

15. Be With Me by Becca Lusher. Review forthcoming.

16. Paradise City by C.J. Duggan. My first foray into New Adult. It didn’t sell me, though I’m willing to give the genre the benefit of a doubt. This book relied too much on the humiliation of its characters for my taste.

17. Machinations edited by Chris Andrews. This anthology was a little heavy on the sci-fi for a CSFG anthology and, with a few notable exceptions, the stories left me indifferent.

19. The Dagger of Dresnia by Satima Flavell. Review forthcoming.

21. Deadly Heat by Richard Castle. The fifth book in the ghostwritten Nikki Heat series tied in to the TV show Castle. The series seems to be settling in tone, though there were a few quirks in the characterisation. A bit predictable but fast-paced fluff.

Flesh and Blood by Kantayra. Naruto m/m slash fiction. Not hugely explicit, but not suitable for all audiences. The story focuses on a relationship between two fairly minor villains. Not only does the author display a fantastic understanding of the characters but they also avoid certain romance tropes in order to portray an unexpectedly healthy relationship.

The Princess Who Didn’t Eat Cake by Lynn O’Connacht. A short allegory regarding demisexuality. I found it a little bit laboured in places but a necessary tale when there’s such a lack of awareness and acceptance of demisexuality in all its forms.