I belong to a number of writing groups, including the Canberra Speculative Fiction Guild. One of the things I love most about the CSFG is the way it celebrates the achievements of its members… and they have a lot to celebrate. Fellow member and friend Donna Maree Hanson has just had two fantasy novels published by Momentum Books. In honour of this occasion, I’ve invited Donna to share some thoughts here. 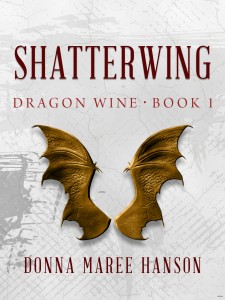 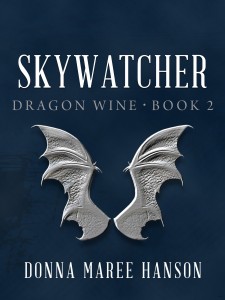 Thank you very much Elizabeth for hosting me today.

Elizabeth has asked me to talk about the writing life and how the writing community helped me get the Dragon Wine series published.

Like most people I have a day job and I’ve been writing now for 14 years. That’s a very long time to dabble at something. However, I was never a dabbler. When I decided I wanted to be a writer I dove in head first, drowned a bit and then started to dog paddle. I wrote obsessively. I stopped watching the TV (just did DVDs) and wrote. I’m less obsessive now, some would say more balanced.

One of the first things that I found ‘out there’ was the Canberra Speculative Fiction Guild (CSFG). In early 2001, they were still a fairly new group and were putting the final touches on their first anthology Nor of Human. What bright shining faces. What a glow, what an aura of enthusiasm. I really clicked with the group. I’m not sure what they thought of me, but the association still stands after all this time.

So mostly short fiction was the thing that most of the group were into, not all of course, there were artists and novel writers. But it was here that I got the hint that writing short stories was good practice. Before I found out about the CSFG, I’d drafted my first novel, using a book along the lines of an idiot’s guide to writing a novel. No that is not its real name, but it was useful in the sense that it helped me gauge that I had enough story for a novel.

Once I decided to write I had ideas shooting out of my eyes, ears and mouth. I had to write them down and short stories were sort of a pressure valve. They weren’t all good and some got published, but my association with the CSFG really began my serious venture into writing, surrounded by like-minded souls who loved speculative fiction. We critiqued each other’s work, we supported, we shared the highs and the lows.

For Dragon Wine I had particular help from people, such as readers and commenters. Early readers of the very rough and graphic beginning were Gillian Polack and Kaaron Warren. They gave me confidence to keep going and advice about the story. It also helped that Dragon Wine was long listed for the Varuna MS Development Awards. Then Maxine McArthur gave me some very good advice, which I will treasure. Less is more. Then there were other members of the group, Nicole Murphy and Kylie Seluka. Matthew Farrer also recommended it to a publisher at one stage.

Through the CSFG I found out about things like SF conventions so I started attending these and networking and even running them. I met editors and other writers this way. I also joined bulletin board such as Harper Voyager’s purple zone. This led me to the wonderful Glenda Larke. Also, people were introduced to the group through other members. This was how I met Trudi Canavan, who also gave me fab advice. We’ve been friends since that time. Wow a long time now I think about it.

So community was important to me to stay writing, trying to write well and refining my craft. There’s lots more I can say about writing retreats, writing buddies, critiquing partners and beta readers but there is only so much room where I can blab about that.

Good luck with your writing all. 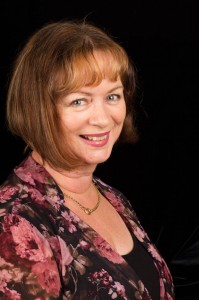 Donna Maree Hanson is a Canberra-based writer of fantasy, science fiction, horror, and under a pseudonym paranormal romance. She has been writing creatively since November 2000 and has been a member of the Canberra Speculative Fiction Guild (CSFG) since 2001. She has had about 20 short stories published in various small press and ezines. In January 2013, her first longer work, Rayessa & the Space Pirates, was published with Harlequin’ s digital imprint, Escape. In September 2014, the first book in the Dragon Wine series, Shatterwing was published Momentum Books (Pan Macmillan Australia’s Digital Imprint) The second book, Skywatcher, was published in October 2014.

Shatterwing and Skywatcher are available in ebook and print.

You can visit Donna at her blog.