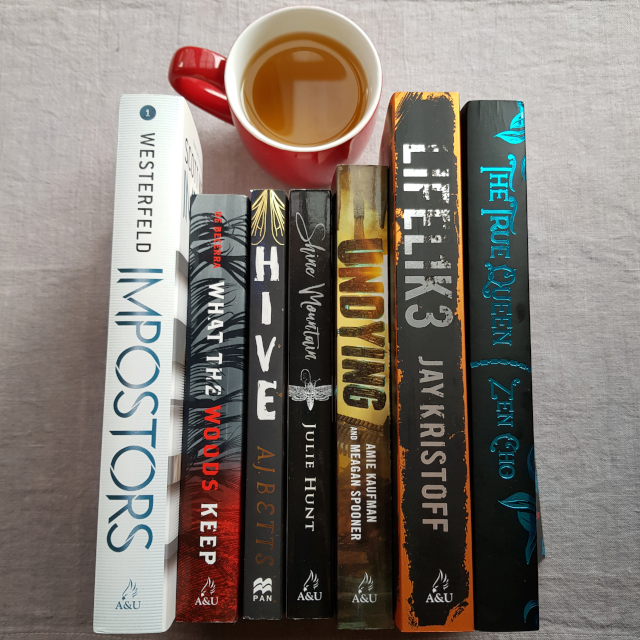 This February was my second-best month for reading on record. It was beaten only by January 2017, which was not coincidentally the last time I faced a deadline for Aurealis judging. It seems that deadlines continue to be the best way to motivate me. This month was also helped by a couple of four-hour train rides to and from Sydney, which afforded some wonderfully uninterrupted reading time. Mt TBR has been shrinking at a very satisfying pace.

While February was an excellent reading month, it was still a challenge to make it through the books I’d earmarked as well as the last of the Aurealis judging. I’m pleased that in the end I made through all of them except one, which had to be returned to the library before I got to it.

Descendant of the Craneby Joan He. For review at Skiffy and Fanty–DONE!

The Raven Tower by Ann Leckie. For review at EGE–DONE!

Sherwood by Meagan Spooner. For review at Skiffy and Fanty–DONE!

Parable of the Sower by Octavia E. Butler. February pick for the Lady Vaults book club.

28. Hive by A.J Betts. Read for the Aurealis Awards. Dystopian YA. While hunting for a wild bee, a young beekeeper discovers signs there may be a world outside the walls of her compartmentalised community.

29. Edge of Time by Thalia Kalkipsakis. Read for the Aurealis Awards. Science fiction. On the run from the government, Scout skips too far forward in time.

30. The Path of the Lost by Beau Kondos. Read for the Aurealis Awards. Dystopian YA. In a society where creative expression is forbidden, a young woman able to harness magic through art seeks to bring her abilities back into the world.

31. Wraith by Shane and Alex Smithers. Read for the Aurealis Awards. After developing the ability to fly, James crash lands in a city in the sky and must find his way home again.

32. Sympath by Carolyn Denman. Read for the Aurealis Awards. Fantasy. An angel resists the attraction to her fated mate, but is forced to work with him to save her friend’s farm.

33. Columbine’s Tale by Rachel Nightingale. Read for the Aurealis Awards. Fantasy. A storyteller with the ability to manipulate the dream world goes on the run from former friends who wish to use her powers for their own ends.

35. What the Woods Keep by Katya de Becerra. Read for the Aurealis Awards. Dark fantasy. The past comes back to haunt Hayden when she inherits her childhood home on her eighteenth birthday.

36. Jane Doe and the Cradle of All Worlds by Jeremy Lachlan. Read for the Aurealis Awards. Fantasy adventure. When her father goes missing, it’s up to Jane to find him again. But she’s not the only one looking.

37. Shine Mountain by Julie Hunt. Read for the Aurealis Awards. Fantasy. When her family farm declines and her oma falls ill, Ellie must go on a quest to destroy the musical instrument that cursed them.

38. Iron by Aiki Flinthart. Read for the Aurealis Awards. Fantasy. Alere is a skilled swordswoman who finds herself at the centre of a brewing war over a rare deposit of iron ore.

39. The Ghost Engine by Theresa Fuller. Read for the Aurealis Awards. Steampunk. Lady Lovelace becomes trapped in a machine with a ghost and must solve a series of puzzles to free them both.

40. Lightning Tracks by Alethea Kinsela. Read for the Aurealis Awards. Fantasy. A troubled boy escapes to a fantasy world and becomes caught in a war.

41. The Way Home by Julian Barr. Read for the Aurealis Awards. Historical fantasy. Follows the survivors of the sack of Troy.

42. We Are Omega by Justin Woolley. Read for the Aurealis Awards. Sci-fi. First contact has been made, but two teenagers soon discover the aliens aren’t as benevolent as they appear.

43. Eve of Eridu by Alanah Adams. Read for the Aurealis Awards. Sci-fi. After her brother is culled, Eve finds it increasingly difficult to maintain the emotional control demanded by society and may soon face culling herself.

44. Lifel1k3 by Jay Kristoff. Read for the Aurealis Awards. Sci-fi. Eve uncovers an android boy who seems to have a strange connection to her grandfather.

45. Spark Joy by Marie Kondo. Nonfiction. As with the first book, it doesn’t bring a whole lot that the TV series doesn’t cover, although the illustrations are cute.

46. Romancing the Beat: Story Structure for Romance Novels by Gwen Hayes. Nonfiction, pretty much what it says on the label. Succinct and useful, and written with a nice sense of humour.

49. In An Absent Dream by Seanan McGuire. Fourth book in the Wayward Children series. Lundy is good at following rules and finding loopholes. So when a door opens to the Goblin Market, she finds herself right at home. This book was a bit different to the previous ones, as Lundy was able to go back and forward between the worlds. I really enjoyed the Goblin Market, with its rules and debts. So it is perhaps unsurprising that I found her attachment to the ordinary world somewhat unconvincing and thus the ending didn’t quite land for me.

51. Shadows Fate by Aiki Flinthart. Read for the Aurealis Awards. Last of the Ruadhan Sidhe trilogy. Urban fantasy. The Ruadhan Sidhe risk being wiped out unless Rowan can prevent information about them from falling into the wrong hands.

52. Undying by Amie Kaufman and Meagan Spooner. Read for the Aurealis Awards. Second of the Unearthed series. Sci-fi adventure. Trapped aboard a spaceship of invading aliens, Mia and Jules must somehow warn Earth of what’s coming.

53. Impostors by Scott Westerfeld. Read for the Aurealis Awards. Sci-fi. Frey is a trained killer who serves as her sister’s body double. When she’s sent to her father’s rival as collateral, she must somehow prevent her true identity from being discovered.

54. The Wicked King by Holly Black. Second in The Folk of the Air series. After a successful coup that made her the power behind the Faerie throne, Jude should be safe. However, it is one thing to gain power and another thing entirely to hold onto it. There was more political manouevering and less romance than in some of Black’s other books, but it maintained a nice tension. Cardan’s feelings were deftly shown between the lines. The map and chapter illustrations from Kathleen Jennings were a beautiful touch.

55. Descendant of the Crane by Joan He. Review forthcoming.

56. Six of Crows by Leigh Bardugo. First book in the Six of Crows duology. Kaz Brekker has clawed his way up from the slums of Ketterdam to become a formidable gang leader. Now he is offered a job that will make or break him. As I have said before, I love me a fantasy heist and this had an epic scale that I really enjoyed. There was a wonderfully diverse cast of characters and I could see why the book was listed among media touchstones for the Blades in the Dark RPG. I was not prepared for the cliffhanger ending (though I probably should have been).

57. Reawakening by Amy Rae Durreson. First book in the Reawakening series. M/M fantasy romance. After sleeping for a thousand years, the Dragon King Tarnamell wakes up to find his human companions have long since passed away. In search of friends, he tries to claim a sassy desert spirit, but the spirit ends up falling victim to Tarn’s old enemy. It is up to Tarn to save him… and this time the Dragon King is on his own. I found this book had a very interesting take on dragon hoards and all the relationships were charming. However, the style was a little rough in a few places and I’m not sure the possessive angle quite worked for me even with the justifications.

Late in the Day: Poems 2010-2014 by Ursula K. Le Guin
Sea Foam and Silence by Lynn O’Connacht
Half-Resurrection Blues by Daniel Jose Older
The Tea Master and the Detective by Aliette de Bodard
Any Duchess Will Do by Tessa Dare
The True Queen by Zen Cho

The coming month’s plans are surprisingly light. If I get through the books listed below, I’ll probably look at tackling Black Wolves by Kate Elliot. It’s a giant book and I’d like to have it read before I see her as the Guest of Honour at Continuum.

The Night Circus by Erin Morganstern. Buddy read with Belle of There Are Ink Spots On My Page, Tam of The Fantasy Inn and Travis of The Coffee Archives.

Grounded by Narrelle M. Harris. For review at EGE.