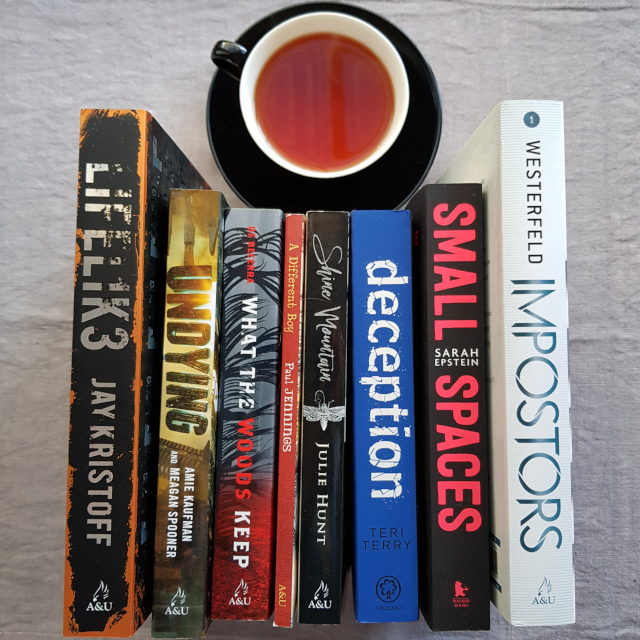 As I’ve mentioned before, my reading stats tend to be down in November. I generally manage 6-8 books, so I was pleased that I managed the higher end of that range this year. I reviewed two collections of short stories this month, which slowed me down. The stop-start of short story anthologies is more difficult for me than simply sinking into a novel.

November also marks the last of my reviewing commitments for the year. Next month, I anticipate sinking into reading for the 2018 Aurealis Awards.

133. Daring Greatly by Brene Brown. A non-fiction discussion of vulnerability which arose out of the author’s popular TED talk. Food for thought.

134. For Real by Alexis Hall. Contemporary m/m BDSM. Laurie is almost forty, a submissive, and–six years on–still hasn’t quite recovered from the break-up of a long-term relationship. Then he meets Toby, a nineteen-year-old dom who just wants a chance to learn but is shut out of the community by his youth. Oh, my heart, this book. There is so much tenderness and the language is fantastic. The 20-year age gap and the explicit erotica will make this a difficult book for some, but I totally loved it. It made a surprisingly apt follow-up to Daring Greatly. Thank you to Chelsea of Not Now I’m Reading and Pia both for recommending this book.

135. How to Fracture a Fairy Tale by Jane Yolen. Reviewed here.

136. Knight Errant by K.D. Sarge. Sci-fi m/m romance.Taro is a former con artist trying to go the straight and narrow to make his adopted sister proud. Unfortunately, Rafe, his sister’s new passenger and old flame, is making that difficult. When Taro tries to get rid of Rafe, the two end up getting captured, then crash land on a deserted planet where everything is trying to kill them. Of course, shenanigans ensue. A decent enough read, but I don’t think it successfully managed to straddle the line between genres.

137. Sweet Poison Wine by Seanan McGuire. Short story in theInCryptid series.Jonathan and Frances Healey head to Chicago for their honeymoon. This was a lot of fun and I’m a sucker for secret hotels.

138. Scourge of the Seas of Time (and Space) edited by Catherine Lundoff. Reviewed here.

139. Begone the Raggedy Witches by Celine Kiernan. Middle grade fantasy. When Mup’s Auntie dies and her father is kidnapped, she and her family cross into the magical world her mother comes from in order to save him. It deals with some big issues, like trust between adults and children, and standing up for what is right under oppressive conditions. Highly recommended.

140. Peace Force by Simon Haynes. Read for the Aurealis Awards.YA sci-fi. Harriet Walsh is a terrible candidate for the Peace Force, but she’s broke and about to be evicted. When she answers a recruitment letter, she discovers the Peace Force need her help more than she thought.