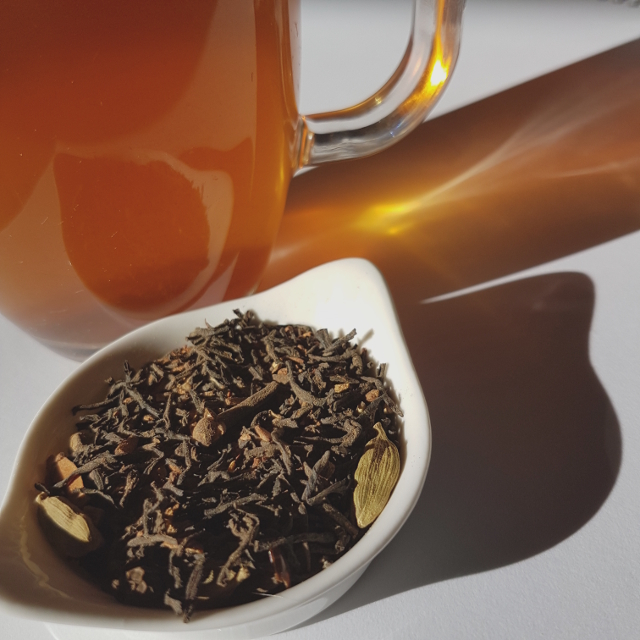 Loose-leaf Links is a feature where I gather together the interesting bits and pieces on sci-fi, fantasy and romance I’ve come across and share them with you over tea. Today’s tea is Raj’s Whole Chai Tea from Gewurzhaus. I’m fond of chai that uses star anise and this blend must also use plenty of black pepper because the warmth lingers in the aftertaste (although perhaps this is because I drink mine unsweetened).

In addition to the interview I recently conducted with Marlee Jane Ward, I also had a short chat with her as part of Skiffy and Fanty’s Signal Boost podcast. The interview makes up the second half of the episode. In the first half, Jen interviews Rati Mehrotra, author of Markswoman (which I previously reviewed for Skiffy and Fanty back in February).

Jen and I also teamed up to interview Rachel Hartman about Tess of the Road, which I reviewed earlier this week. And if you’re looking for more from Rachel, she has a guest post on John Scalzi’s blog discussing how a previously picaresque road trip came to involve a rape backstory.

Congratulations to Cat Sparks, whose novel Lotus Blue has been shortlisted for the Compton Crook Award. The award was established by the Baltimore Science Fiction Society to honour the best speculative fiction novel published by a debut author.

Controversy has risen around the naming of the new Not-a-Hugo Young Adult Award. Although it will be presented without a name this year, the proposed name of the Lodestar Award is due to be ratified at the business meeting of this year’s WorldCon. File 770 has the statement put forward by several WorldCon 76 members regarding their intention to propose a new name for the award. Given that there was extensive consultation on the naming by the committee tasked with organising the award, some people feel this disrespects the committee’s hard work. It will also delay the naming of the award by another year. There are strong indications that the name this new proposal plans to put forward is tied to Ursula Le Guin. But while this is a lovely sentiment, Alex Wells has some good reminders about why the committee ultimately decided against naming the award after a specific person.

Fritz Foy has been named President and Publisher of Tor and Forge Books.

The Shimmer Program is facilitating SFF fan exchanges to and from China. The deadline for applications is 1 April.

After receiving extensive public backlash for trashing the cover of his forthcoming novel on social media, Terry Goodkind attempts to dig up by claiming his objection to the cover was that it was sexist.

The Ripped Bodice have published their second annual report on the state of racial diversity in the romance genre. The results are predictably disheartening.

Over on Book Riot, Grace LaPointe discusses the alienating lack of disability representation in literature.

Still at Book Riot, Nicole Froio talks about the ways social media is ruining her relationship with books and touches on some of the ableist attitudes behind current discourse.

Via Alis Franklin, the Radical Copyeditor’s Guide to Writing About Transgender People.

Locus Magazine offers a summary of short fiction markets from 2017.

Jason Sanford raises some concerns over Left Hand Publishing. They offered this response.

Galli Books have announced they’re doing a reprint series curated by Bogi Takacs. The series is focused on marginalised creators and with feature stories not previously published online. Sofia Samatar has already kicked off the series with her story The Adventures of Ja’far al-Barmaki.

Sam Hawke’s City of Lies, due out from Tor in July, now has a UK/ANZ publisher. Transworld is set to bring out the hardback in August.

Claire G. Coleman, author of Terra Nullis, announced on Twitter, her next two novels will be coming out from Hachette Australia.

The cover for Simon Petrie’s forthcoming collection Wide Brown Land has been revealed. It showcases art from Shauna O’Meara.

Shauna’s artwork also features in Murder in the Mail a mystery told by Felicity Banks through letters, objects and artwork posted to the reader. The project is currently being Kickstarted.