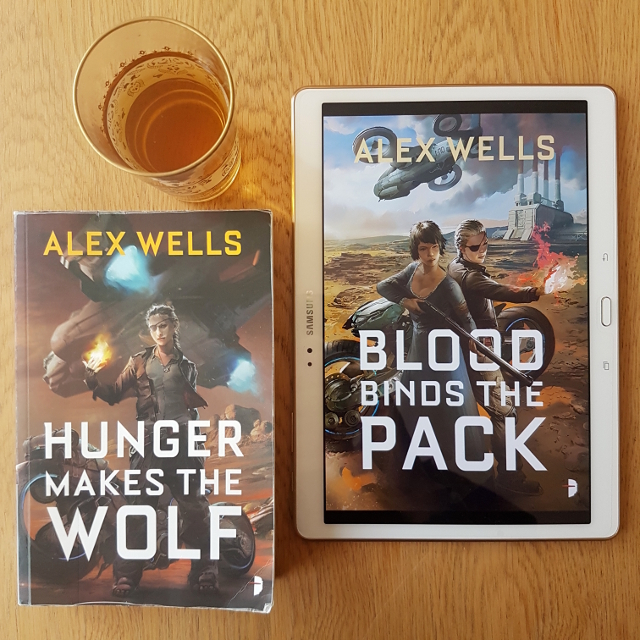 The strange planet known as Tanegawa’s World is owned by TransRifts Inc, the company with the absolute monopoly on interstellar travel. Hob landed there ten years ago, a penniless orphan left behind by a rift ship. She was taken in by Nick Ravani and quickly became a member of his mercenary biker troop, the Ghost Wolves.

Ten years later, she discovers the body of Nick’s brother out in the dunes. Worse, his daughter is missing, taken by shady beings called the Weathermen. But there are greater mysteries to be discovered both about Hob and the strange planet she calls home.

My reading year has been off to a brilliant start. First The City of Brass, then Ironheart and now Blood Binds the Pack. This book is the sequel to Hunger Makes the Wolf and I devoured them both in no time. I loved this series so much I didn’t even stop to take notes as I read. I’m already making a list of people I can gift it to.

Tanegawa’s World is a desert planet owned by a large corporation called TransRift. The primary industry is mining. It’s a harsh life for the residents, who are at the corporation’s mercy for the necessities of life. The Unions are essential in making sure safety standards are met and workers are properly paid. Even then, it is a desperate kind of power and weak in the face of the corporation’s control. Little is done to aid those blacklisted by the company, some of whom end up joining gangs of bandits and mercenaries.

The Ghost Wolves are one such gang of mercenaries. This tight-knit group of bikers take what jobs they can to eke out a living and stick it to the company wherever possible. Of these reprobates, Hob Ravani is on the bottom rung. Taken in by the head of the Ghost Wolves, she accidentally betrayed the gang and now must prove her worth once more. She is given that chance when she finds Ol’ Nick’s brother shot dead in the desert.

The series has a Western flavour to it, but subverts some of the more problematic tropes and trends of the genre. The cast is diverse, featuring a host of PoC characters. Same-sex relationships are normalised. There’s even some disability representation, with both Hob and Nick Ravani missing an eye each… though I concede the series could have benefited from more representation in this area.

The Lone Gunman is a trope that gets short shrift; everything about the series emphasises collective power. This is particularly the case in Blood Binds the Pack, where the Union comes into more direct opposition with the company. However, it can be seen in numerous other ways. The Ghost Wolves rely on teamwork for survival; bad things happen when a member goes out solo. But it goes beyond survival. There’s a strong found-family vibe to the mercenary gang.

It also plays into Hob’s friendship with Mags, Ol’ Nick’s niece. It was so delightful to see such a strong female friendship on the page. It’s not without its bumps–Hob, particularly, makes mistakes that strain things. But they never give up on each other, and as the women rise in influence their friendship has an impact on the communities around them. It was also a joy to see a friendship between such different women. In many ways, they are opposites, but they hold true to each other.

In addition to the Western genre, science fiction and fantasy are also blended in. There’s something mysterious about Tanegawa’s World that causes electronics to fritz and encourages the development of strange powers in certain members of the community. The elemental magic was one of my favourite parts of the story. Hob’s fire manifests in fairly traditional ways: she lights cigarettes with the snap of her fingers and throws the occasional fireball. However, other powers manifest in some different and creative ways. The Bone Collector is particularly fascinating, turning to stone at will and moving through the sand. His relationship with Hob is fascinating and continuing readers may be delighted to hear he gets more time in the spotlight throughout Blood Binds the Pack. The latter book also has an instance of Air magic that manages to be a fascinating and powerful piece of representation.

The story is told in third person, predominantly focused Hob and Mags, though we also hear from certain Wolves and pick up more characters along the way. The changes in voice between perspectives are subtle, but effective. The pacing also works well, interspersing some wonderful moments of connection between the characters in amongst the action. Hunger Makes the Wolf comes to a dramatic and satisfying conclusion. Blood Binds the Pack manages to increase the stakes and the tension through an effective countdown at the start of (and sometimes within) each chapter.

All in all, Hunger Makes the Wolf and Blood Binds the Pack form an addictive duology that has become a new favourite.