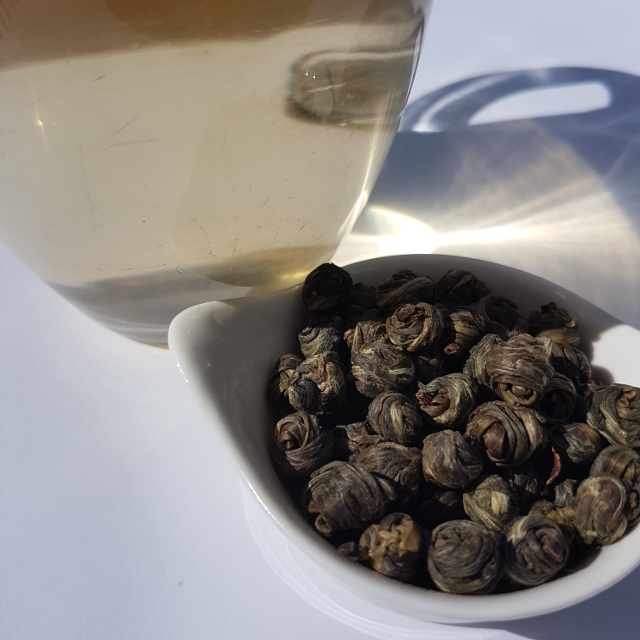 Loose-leaf Links is a feature where I gather together the interesting bits and pieces on sci-fi, fantasy and romance I’ve come across and share them with you over tea. Today’s tea is China Pearls from Indulge Tea. It has a light, grassy flavour and stands up well to multiple brewings.

I’m delighted to have a short story of mine appearing on the Love Letters Podcast. Created and hosted by Liz Duck-Chong, the podcast always brings short bursts of beauty into my day.

Nominations for the Hugo Awards are now open until 16 March. WorldCon Artist Guest of Honour John Picacio will be hosting the ceremony.

Nominations are also open for the Australian Shadow Awards until 28 February.

And voting is open for the 2018 Locus Awards. Voting is open to non-subscribers, but only those willing to complete a survey. Voting closes 15 April.

Welcome to Your Authentic Indian Experience by Rebecca Roanhorse was voted Apex Magazine’s Best Story of 2017.

The Sad Puppies have been stirring up trouble in Australia, falsely claiming that anti-Puppy blogger Camestros Felapton is Foz Meadow’s husband Toby. Foz gives the background to the situation, then elaborates on the allegations and the impact this harassment has had on them. File 770 reports on the subsequent apology from Lou Antonelli.

In way more awesome news, Amal El-Mohtar will be taking over the New York Times’ column on SFF as N.K Jemisin steps down to focus on her creative work.

Marlee Jane Ward is running as the sole candidate for the Down Under Fan Fund. Please make sure you vote to send her to San Jose for WorldCon 76!

John Picacio has started the Mexicanx Initiative, sponsoring WorldCon memberships for Mexicanx professionals and fans. Thanks to several generous donors, there are fifty memberships to be awarded.

Not strictly SFF or romance, but still within genre, The Staunch Prize has been created to honour crime thrillers where no woman is beaten, stalked, sexually exploited, raped or murdered. The shortlist will be announced in September and the winner will be announced on 25 November.

Over at Strange Horizons, Vanessa Rose Phin hosts a round-table on trans and non-binary SFF that goes beyond Gender 101.

A reminder that Lightspeed Magazine is open for submissions until 19 February.

PodCastle are also open for submissions until 28 February.

Unsung Stories are open for novel and novella submissions until 26 February.

And it’s not too late to join in the Post-It Note Poetry challenge!

Omnium Gatherum will be publishing a new novel from Australian horror writer Kaaron Warren. The Keeper of Truth is scheduled to be released later this year.

CSFG Publishing have released the list of stories and authors to be included in their forthcoming anthology A Hand of Knaves, edited by Chris Large and Leife Shallcross.