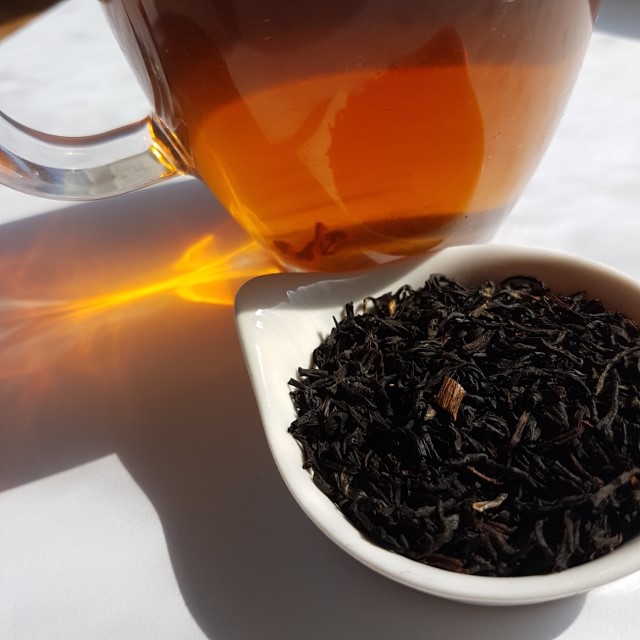 Loose-leaf Links is a feature where I gather together the interesting bits and pieces on sci-fi, fantasy and romance I’ve come across and share them with you over tea. Today’s tea is Tea for Sunday from the Tea Centre. It’s an Assam tea with pieces of vanilla, so it’s strong with a touch of sweetness.

Since my post on my podcast playlist, I’ve had the great pleasure of being a guest on Radio Free Fandom. Claire has put together a special episode about conventions and WorldCon in particular. I spoke about general con-going tips and she had a range of other guests speaking on Helsinki 101, the Hugo Award nominees, attending cons as a pro, and what goes on at a WorldCon business meeting. Claire did a great job on the episode and I found it really informative.

If you’re looking for yet more podcasts, the Skiffy and Fanty Show blog recently had a round-up of podcasts of note.

Awards season is in full swing, with a number of honours being presented since my last links post. In romance, the Romance Writers of America have announced the winners of the RITA and Golden Heart Awards for 2017. And the Romantic Times have presented their awards for 2016.

In SFF, the Mythopoeic Awards and the Arthur C. Clarke Award have also been presented.

The nominees for the Dragon Awards were announced. Over at File 770, JJ takes a look at just how well-known these nominees are by listing their stats on Amazon, GoodReads and LibraryThing. The difference in statistics between nominees is considerable in most categories. Cora Buhlert also offers some commentary and a links round-up for those looking to read further. And John Scalzi has withdrawn from consideration.

Speaking of which, there will be live coverage of the Hugo Awards ceremony on YouTube. Unfortunately for locals, the ceremony will be starting at 2AM for the east coast of Australia.

Paul Weimer’s report on his adventures in New Zealand and Australia as the 2017 Down Under Fan Fund delegate is now for sale. It costs $7 USD and the money goes to help fund the next DUFF candidate. It’s worth the cost just for Paul’s gorgeous photography.

Donna Maree Hanson, the Get Up-and-over Fan Fund delegate, checks in on stage one of her journey: Canberra to Helsinki.

There has been a lot of great content coming out in relation to Uncanny Magazine’s Disabled People Destroy Science Fiction. Non-fiction editor Elsa Sjunneson-Henry has a fantastic essay on Tor.com called I Built My Own Godd*mn Castle. Fiction editor Dominik Parisien is over at Black Gate discussing the importance of the anthology for disabled creators. And there is a raft of great essays edited by Nicolette Barischoff in the updates section of the anthology’s Kickstarter page. I highly recommend checking them out.

Nicola Griffith writes an open letter to writing programs, workshops and retreats on the importance of accessibility for disabled writers.

Fireside Fiction have released their 2016 Black Spec-Fic report. While numbers are up on 2015, there’s still a long way to go. Nerds of a Feather provides some additional commentary.

Geoff Ryman shares where you can find 21 pieces of African speculative fiction for free online.

Clarion West have announced the instructors for their 2018 Summer Workshop.

Over at Clarkesworld Magazine, Cat Rambo discusses the subtle art of promotion.

Cora Buhlert reports in on her challenge to write a short story a day throughout July. This is her third year of undertaking this challenge.

They may have found use for this post from Stewart C. Baker on tools for online collaboration.

Alison Croggan and Daniel Keene are currently running a Pozible campaign for their novel Fleshers, a dystopian YA cyberpunk. They’ve already made their target but would love to meet their stretch goals. Alison was a finalist in the YA category of the Aurealis Awards last year, so it goes without saying I liked her work.

Shauna O’Meara has been producing some gorgeous artwork to promote the CSFG’s forthcoming anthology A Hand of Knaves.