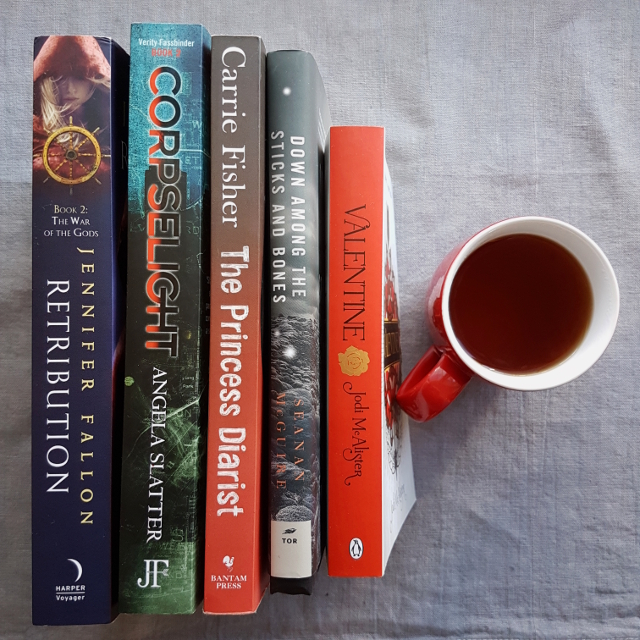 2017 is now half over and I have met my initial annual reading goal of 100 books. I’ve decided to go ahead and set a new target. Without the Aurealis Awards to spur me on, my reading pace has slowed, so I think 200 books isn’t realistic. However, 150 books should be achievable.

June was my slowest month for reading yet, with just 11 books finished. I put this down to attending Continuum. I should also note that I was very restrained with my acquisitions at the convention; most of this month’s acquisitions are for review.

96. Nimona by Noelle Stevenson. Read for the Sisterhood of the Travelling Paperback podcast. Previously a web comic, it tells the story of a young shapeshifter who becomes the sidekick to a villain… and perhaps does a better job of being the villain than the man she’s assisting. I enjoyed seeing the art style evolve, and there were some lovely moments of vulnerability in the story.

97. This Census-Taker by China Mieville. Read for the Hugo Awards. A young boy potentially witnesses the murder of his mother by his father, but is nevertheless left by the village in the care of his father. A strange, experimental story that I never quite grasped.

99. Beyond Innocence by Kit Rocha. Post-apocalyptic erotica. Sixth book of the Beyond series. As a trained courtesan, Jared knows he’s most valuable to the O’Kayne’s by staying undercover and collecting intelligence. However, an encounter with Lily, the newest O’Kayne, makes it just that little bit harder. This had a slightly different voice to the previous novels, which I appreciated. I also loved the way Lily not only rescues herself but the people she cares about, rather than ending up as the damsel in distress.

100. The Vision by Tom King. Read for the Hugo Awards. The Vision seeks normality and settles into suburbia with the family he has created for himself. It soon starts to go awry. While I appreciate the way it wrestles with bigotry and admire its incorporation of elements from classical tragedy, neither the art style nor the story appealed to me.

101. Behind the Mask edited by Tricia Reeks and Kyle Richardson. Reviewed here.

102. A Frost of Cares by Amy Rae Durreson. Contemporary m/m romance. Luke is a historian who is offered the chance to catalogue the archives of a remote seventeenth-century mansion. However, he gets a little more than he bargained for when he attracts a malicious ghost and is forced to turn to the taciturn but attractive groundskeeper for help. A sweet story with some pretty spooky scenes. I found the choice to defuse some of the tension by having Luke tell it as a memoir was a curious one, and overall I felt it wasn’t quite as good as Durreson’s Spindrift.

103. Beyond Happily Ever After: Closed Doors by Kit Rocha. Post-apocalyptic erotica. A short story set between the sixth and seventh books of the Beyond series. Lex, Jasper and Noelle take it upon themselves to make sure Dallas unwinds after work. It was nice to revisit these characters, but it didn’t ultimately add anything to the series. It’s a story squarely aimed at fans.

104. Beyond Happily Ever After: Blank Canvas by Kit Rocha. Post-apocalyptic erotica. A short story set between the sixth and seventh books of the Beyondseries. Cruz takes Ace and Rachel on a road trip. I loved the premise of this story, which really played into the personalities of these characters. Another story aimed squarely at fans of the series.

Control by Mary Calmes and Cardeno C.
Down Among the Sticks and Bones by Seanan McGuire
Valentine by Jodi McAlister
The Princess Diarist by Carrie Fisher
One Last Drop by Nicole Field
In Darkness Burning by Bailey Queen
Sunvault edited by Phoebe Wagner and Bronte Christopher Wieland
Corpselight by Angela Slatter
Trust by Kylie Scott
The Epic Crush of Genie Lo by F.C. Yee
Ashes by Amanda Pillar

our compass needle standing still by brilligspoons. A retelling of Elizabeth Gaskell’s North and South set in space. I loved it to pieces, so thank you to the incomparable Kay for recommending it. My only complaint was that it wasn’t longer–unsurprising when you compress a 500-page book into under 3000 words–but the author did a fantastic job, nevertheless.