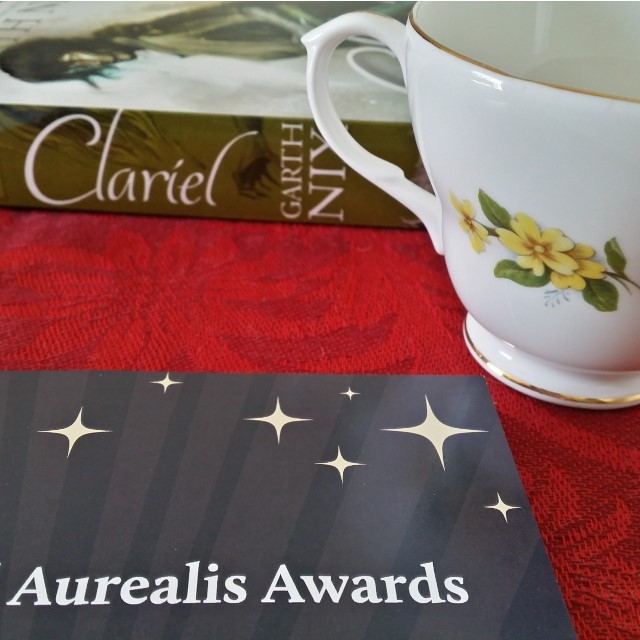 The 2016 Aurealis Awards were presented on Friday night. Congratulations to all the winners!

As most of you know, I had the great honour of being one of the judges on the panel for YA novels and YA short stories. Now that the results are out, I’d like to share a few thoughts on what it was like to be a judge.

I signed up for a few different reasons: because I love SFF reading challenges, because I wanted to learn more about Australian YA SFF, and because free books! I’d wanted to sign up for a few years, but hadn’t been confident my reading speed was up to par. However, I’d read 91 books in 2015, which was close to a personal best. I figured it would still be a bit of a struggle. After all, I still had to review one book a week here for the blog and it wouldn’t be appropriate to review the material I was judging. But I figured it was manageable. I also picked the YA categories because they were one of the smaller categories in 2015. As much as I’d dearly love to tackle the fantasy novel category, I’m not quite that masochistic (yet)

The problem with my reckoning was that there was an embedded assumption that the award books would arrive at a regular pace. I really should have known better. The award opened for entries mid June and books trickled in until the first small rush arrived at the end of September. However, most of the entries arrived en masse in December.

To complicate matters, I suffered a bout of eye strain in November and continued to struggle with it through December. In the end, I recovered thanks to some eye drops and the inclusion of frequent breaks in my schedule. I made up for lost time by averaging a book a day throughout January and February. I didn’t watch any TV or do much of anything other than read. Now, you know I love reading, but two months and more of that started to get a bit much, even for me.

It improved my reading skills, though. I got faster. I found that 20 pages was usually long enough to judge the quality of the writing. I did a lot of skimming. And I got more comfortable with not finishing books. Prior to being a judge, I could count the number of books I’d DNFed on one hand.

I got to know my postman and the delivery guys very well. Books would show up randomly on my doorstep. It was like Christmas. And then, when it was actually Christmas, all the Aurealis books made a good disguise. My sweetheart busted me with the copy of Ninefox Gambit I’d ordered as his Christmas present. So, I told him it was another book for judging and let him take a look at it before putting it in the pile of judging books. I quietly snuck it out a couple of weeks later and wrapped it up.

In the end, the YA panel received 53 novels and 55 short stories. Pretty much all of the short stories came in electronic format, whereas the novels were more of an even split. Publishers covered the full spectrum: self-published indie authors, small and big press. Reading through all of it highlighted for me the fact that YA is not a genre, but a target audience. I appreciated that because it meant I could change things up by switching genres rather than glutting myself on one.

Each of the judges came up with their own shortlists, one for each category. As soon as I handed mine in, I started second-guessing myself. But there was a consensus among the judges as to which pieces stood out, even if there was some negotiation around the exact order. The process was surprisingly quick, once we got down to it.

Amusingly enough, the first thing I did after the shortlist was finalised was buy more books. I’m told that’s pretty common among the judges and I guess it takes a certain kind of person to judge a book award.

Would I do it again? I think so. It was stressful at times. But it also taught me a lot: about reading, about the processes behind book awards, and about Australian YA SFF (as I’d hoped). I discovered new authors. So, yes, I would do it again. But first I need a year or two to recover.

2 thoughts on “2016 Aurealis Awards in Retrospect”