Problem Daughters will amplify the voices of women who are sometimes excluded from mainstream feminism. It will be an anthology of beautiful, thoughtful, unconventional speculative fiction and poetry around the theme of intersectional feminism, with a specific focus on the lives and experiences of women of colour, QUILTBAG women, disabled women, sex workers, and all intersection of these. Edited by Nicolette Barischoff, Rivqa Rafael and Djibril al-Ayad, the anthology will be published by Futurefire.net Publishing and is currently being crowdfunded.

Discussion of any one of these variations from the dominant paradigm could fill books and university syllabi, let alone essays of their own, but this post will focus on race, and specifically how Problem Daughters will manage different views on, and expressions of, racial identities.

My co-editors and I are spread across time zones: Djibril lives in the United Kingdom, Nicolette in the United States, and I’m in Australia. In each of these countries, and others, racial identities are constructed in different ways. That can be a good thing – diversity is colourful and great and wonderful! But there’s a negative side too – racism exists everywhere, it just manifests differently in different places (it’s also not uniform within countries, regions or even cities).
Exactly how these differences are expressed in Problem Daughters will depend on the submissions we receive, but there’s so much that could be explored. The colonial and immigration histories of Australia and the US have many similarities, but also differences that are difficult to summarise in a blog post; the UK, as a coloniser of both, is different again.

“Stop the boats,” “build a wall” and Brexit are all different manifestations of the same sentiments; “Asian” is an over-generalised term that refers to different ethnic groups in different countries (South Asian in the UK; East and South-East Asian in the US and Australia); slavery played (and continues to play) out in different ways across the world. Can we apply a blanket rule of “racism can’t exist against white people” when racists in the UK discriminate against Polish immigrants? What’s the “correct” terminology to refer to x ethnic group? These and other dilemmas merit research, consideration; they’re stories that could unfold in myriad ways.

To go into just one example, I’d like to talk about a film (even though this is a book blog, sorry!) that I loved, but that wasn’t without problematic elements – Mad Max: Fury Road. Early in the film, Max has a delusion (or hallucination or vision?) of a traditionally dressed Aboriginal man; apart from that, on my first viewing, the film struck me as being overwhelmingly white. My specific thoughts, as an Australian viewer, were: where are the Aboriginal Australians? Where are the Asian people? But something I didn’t do was assume that every single character who was present was white. Why? Because, to be blunt, who am I to know if someone is a person of colour or just a bit tanned?

So when I hit social media after I got home from the cinema and started seeing calls of whitewashing, it wasn’t surprising to see Australians follow these up with, “well yes, but… Zoe Kravitz, Courtney Eaton, Megan Gale, iOTA? No?”. For some North Americans, the answer was no, not good enough, except maybe Kravitz. These actors weren’t parsed as people of colour (itself a less common term in Australia) by those viewers because of a lack of familiarity with Australian demographics and Māori people, and because the film didn’t specifically name identities (Furiosa is never called disabled, either). And there’s plenty to critique there, sure, but a paper bag test just isn’t good enough in this instance.

Another hugely important critique in the Australian context is Stephanie Lai’s unpacking of how the film appropriated Indigenous Australian narratives … without including identifiably Indigenous Australian characters. (Yes, some of the extras could, in theory, have been light-skinned First Australians, but even that would be a weak connection in this context.) In the same way as I sometimes miss a blatant US-centric racist stereotype until it’s pointed out to me by an American friend, the tragedy of the Stolen Generation isn’t usually foremost on American minds.

This isn’t necessarily a bad thing. No one can know or experience everything, or focus on every injustice in the world at once. So, our starting point in selecting stories for Problem Daughters will be to acknowledge that, as we’re hoping to attract writers from around the world, their experiences will vary, and that will manifest in their stories.

We’ll be more familiar with some of these experiences than others, but we hope that with an inclusionary approach, we can showcase a range of experiences around race. In short, we’re making a space for difference, including difficult differences – that’s literally the point of the anthology. We can’t wait to see what people come up with, and what conversations might start because of these stories. 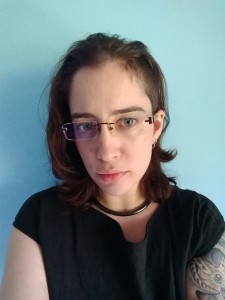 Rivqa Rafael is a queer Jewish writer and editor based in Sydney. She started writing speculative fiction well before earning degrees in science and writing, although they have probably helped. Her previous gig as subeditor and reviews editor for Cosmos magazine likewise fueled her imagination. Her short stories have appeared in Hear Me Roar (Ticonderoga Publications), The Never Never Land (CSFG Publishing), and Defying Doomsday (Twelfth Planet Press). In 2016, she won the Ditmar Award for Best New Talent. When she’s not working, she’s most likely child-wrangling, playing video games, or practising her Brazilian Jiujitsu moves. She can be found at rivqa.net and on Twitter as @enoughsnark.

If you’re interested in helping crowdfund Problem Daughters, be sure to check out their Indiegogo campaign. Writers looking to contribute can find details at The Future Fire, but please note the anthology is not yet open for submissions.