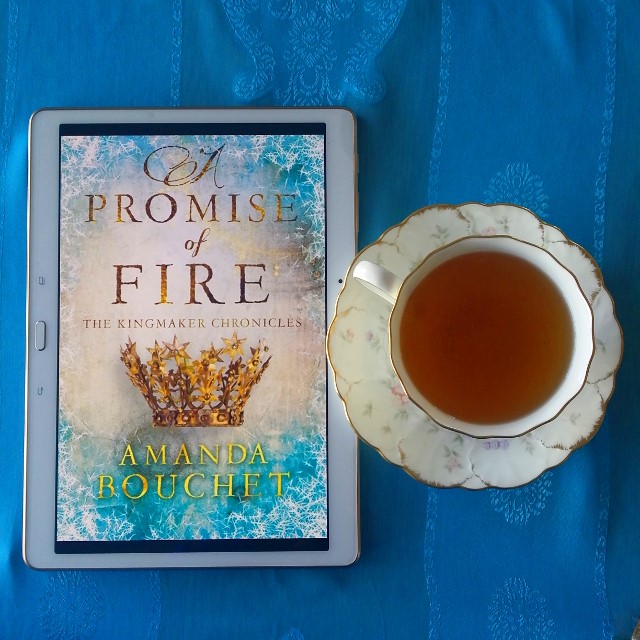 Kingmaker. Soothsayer. Warrior. Mage. Kingdoms would rise and fall for her . . . if she is ever found

In the icy North, where magic is might, an all-powerful elite ruthlessly guided by a glacial Queen have grown to dominate the world. Now rebellion is stirring in the rough, magic-poor South, where for the first time in memory a warlord has succeeded in uniting the tribal nations.

Stuck in the middle is Cat – circus performer and soothsayer – safely hidden behind heavy make-up, bright colours and the harmless illusion of the circus. Until someone suspects she’s more than she seems . . .

Captured by the Southern warlord Griffin, Cat’s careful camouflage is wearing thin. For how long can – or should – she conceal the true extent of her power? Faced with dragons, homicidal mages, rival Gods and the traitorous longings of her own heart, she must decide: is it time to claim her destiny and fight?

I didn’t really get along with A Promise of Fire. On the surface, it had a lot of elements I love–a good balance of fantasy and romance, interesting use of mythology–but these were outweighed by the things I found troublesome.

The opening didn’t make a good case. It was clunky and heavy on description, rushing to introduce characters, most of whom play very little part in the remainder of the story. Fortunately, the style evened out after that first heady rush.

The thing that really bothered me was the relationship between Cat and Griffin. Cat is a Kingmaker, a being that appears once every 250 years whose magical abilities guarantee the rule of whoever they support or holds them captive. How exactly this works is never quite clear; while Cat has quite a few magical abilities, all of them seem to have come to her for other reasons. Griffin is a warlord who has recently overthrown the corrupt, magic-using rulers of the kingdom and installed his sister in their place. Lacking magic himself (other than an immunity to harmful magic), he takes Cat captive to ensure his sister’s peaceful rule and keeps Cat tied close to him at all times as they make their journey back to the palace.

There’s an inconsistency in Griffin’s treatment of Cat that smacked of gaslighting to me. Cat is understandably outraged and upset over her loss of freedom. While Griffin treats her fairly–making sure she has access to everything she wants and even paying her as if she were another member of his bodyguard–his attitude (and the attitude of his bodyguards) towards her desire for freedom is that she’s being unreasonable. Nor does he free her from her physical confines until she swears a magically-binding vow not to escape. However sweet he is towards the people he cares about, and however admirable his goal, without her agency Cat’s attraction to Griffin comes across as something more akin to Stockholm Syndrome.

This lack of agency even extends to their sex life. Although she’s definitely attracted to Griffin, Cat has some (understandable) concerns about pregnancy. So at first she backs out of having sex, until a god throws a tantrum, causing her to change her mind. This kind of pressure undermines any sense of agency on Cat’s part.

What makes all of this even more disappointing was that the other relationships in the book are handled quite well. The dynamic between Griffin’s bodyguards and Cat is laid-back and fun, as they grow to become close friends. They tease each other mercilessly but are always there when it counts. The jealousy this causes Griffin is also handled very well and I actually enjoyed this aspect quite a lot. I also enjoyed the genuine affection between Griffin and his family.

As I mentioned before, I appreciated the balance of fantasy and romance, though it may be too heavily weighted towards the latter for some readers. The focus is primarily on the relationship between Cat and Griffin, with the epic fantasy plot coming in second. There are also some explicit sex scenes which may not be to everyone’s taste.

Overall, I found the book disappointing in its waste of potential.