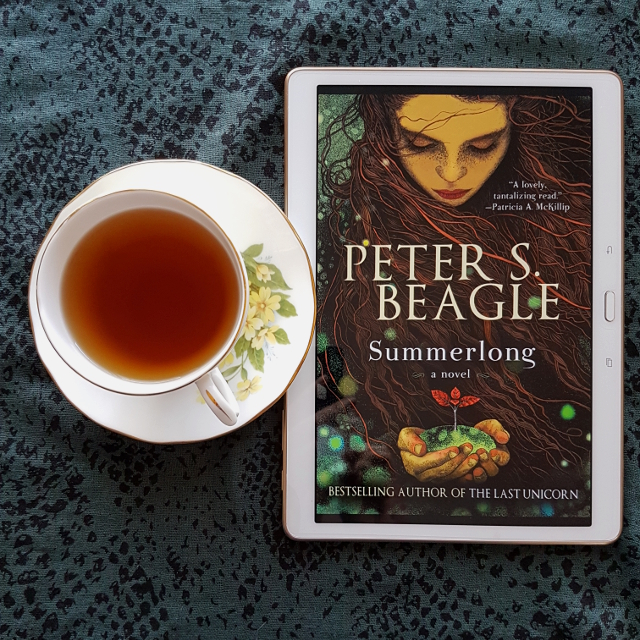 Retired history professor Abe Aronson is a cranky, solitary man living out his autumn years on Gardner Island, a ferry ride away from the hustle and bustle of nearby Seattle. One rainy February night, while dining at a favorite local haunt, Abe and his girlfriend Joanna meet an engaging enigmatic waitress, new in town and without a place of her own. Fascinated and moved by the girl’s plight, Joanna invites her to stay in Abe’s garage. It seems everyone falls for the charming and invigorating the waitress, but she is much more than she appears, and an ancient covenant made a millennium ago threatens to disrupt the spring and alter the lives of Abe, Joanna, and all those around them forever…

I’ve never read The Last Unicorn, so I wasn’t sure what to expect from Peter S. Beagle. That probably worked to my advantage because the little I know leads me to suspect that Summerlong is a very different book. While it made good use of myth and magical realism, it was ultimately grounded in modern life and focused on middle-class relationships.

The first half of the book sets up these relationships. Abe and Joanna are older protagonists, in their 60s and late 50s respectively. They are in a long-term relationship but value their independence–each has their own home and they characterise their relationship as “being single together”. Abe continues to work on historical articles in his retirement and Joanna is a flight attendant who visits Abe whenever she’s home. It is a comfortable, well-worn relationship. Also involved is Joanna’s daughter Lily, with whom she has an uneasy relationship. Lily tends to keep her mother at arm’s length and Joanna, in turn, despairs of her daughter’s terrible taste in women (although never that her taste runs to women, which was nice to see).

Their lives are disrupted by the arrival of Lioness, a beautiful young woman with a mysterious past. It is clear early on that there’s something a bit fey about Lioness. Wondrous things have a habit of happening around her, even when she’s not actually present: the weather becomes unseasonably gentle, orcas swim into the bay and Abe gets a chance to make something of an old hobby.

Just past the halfway mark, the plot took a turn that made me sigh and wonder if we really had to go down that path. While it had been flagged as a possibility and therefore didn’t come as much of a surprise, I was disappointed when it came to pass. There was nothing new in its use and while it certainly brought disruption, I’m not convinced it really brought conflict. Instead, I felt disconnected from the characters and their motivations, finding it difficult to understand why they would choose to act in the way that they did. It turned a potentially amazing book into something that struggled to hold my interest.

Which was a shame, because there was a lot I enjoyed about the book. The meeting of mythic and mundane is something I love and was handled well in the first part of the book. I also really enjoyed the setting. The natural world is very present on Gardner Island and definitely has a life of its own, helped along by some lovely use of language.

All in all, Summerlong was beautiful but disappointing. It wasn’t my cup of tea, but leaves me cautiously willing to try more of Beagle’s work in the future.