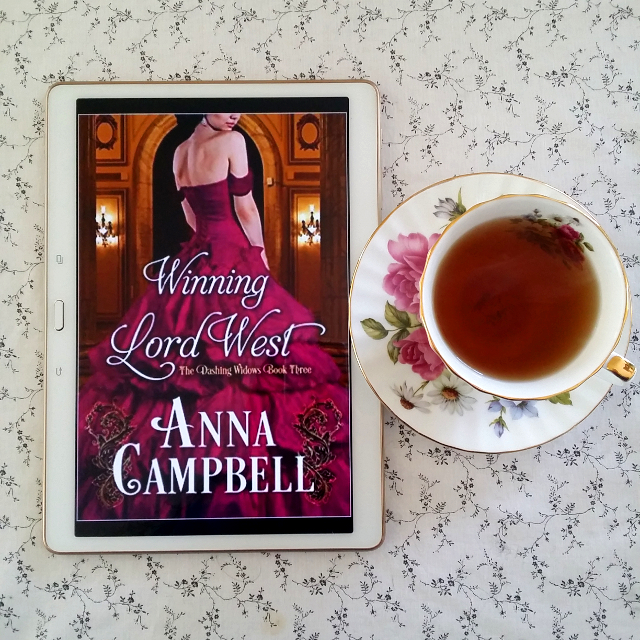 Spirited Helena, Countess of Crewe, knows all about profligate rakes; she was married to one for nine years and still bears the scars. Now this Dashing Widow plans a life of glorious freedom where she does just what she wishes — and nobody will ever hurt her again. So what is she to do when that handsome scoundrel Lord West sets out to make her his wife? Say no, of course. Which is fine, until West focuses all his sensual skills on changing her mind. And West’s sensual skills are renowned far and wide as utterly irresistible.

Vernon Grange, Lord West, has long been estranged from his headstrong first love, Helena Nash, but he’s always regretted that he didn’t step in to prevent her disastrous marriage. Now Helena is free, and this time, come hell or high water, West won’t let her escape him again. His weapon of choice is seduction, and in this particular game, he’s an acknowledged master. Now that he and Helena are under one roof at the year’s most glamorous house party, he intends to counter her every argument with breathtaking pleasure. Could it be that Lady Crewe’s dashing days are numbered?

While I’m given to understand Winning Lord West isn’t the last book in the Dashing Widows series, Helena is the last of the dashing widows introduced in the first book, The Seduction of Lord Stone.

This book takes a bit of a different format to the last two. It opens up with a scene from The Seduction of Lord Stone but told from Helena’s perspective. Next comes a series of letters between Helena and Lord West after he is sent to Russia on a diplomatic mission. Finally, the meat of the story is told in the more conventional format. It would have been possible to tell the story without the letters but I’m glad they were included. They really set up the personality of both characters and the mismatch in communication style is very entertaining. Lord West remains determinedly charming, while Helena acerbically rebuffs him at every opportunity. However, despite Helena’s unfriendliness, her fondness for West leaks out whenever she drops her guard. Their friendship predates her violent marriage and it’s nice to see evidence of that creeping back in.

But there’s definitely more here than friendship and the tension between them is delicious. Yet, the mixture of innocence and sensuality didn’t quite work for me–it felt a bit like trying to have it both ways, despite there being a plausible reason. Also, there’s one or two grey areas in relation to consent, in a similar manner to Tempting Mr Townsend.

One of the things I’ve liked about the series is the very different personalities of the widows. Caroline is reckless and impulsive, Fenella is demure but strong, and Helena is prickly and intelligent. One thing I liked less is how Helena loses a bit of this intelligence on falling in love. While it is nice to see love undo her, it felt to me like she became quite a different person and lost some of what made her interesting.

Another disappointment was the passing references to her work in mathematics. She’s supposed to be engaged in some good work in that particular field, but we never get to see it in the story–not even obliquely. While I understand this may have been due to length constraints, I feel it would have been better to lose this entirely and leave the focus on her passion for horses.

Overall, I found Winning Lord West was predictable but made for nice, light reading. I believe there will be at least another three books in the series and I was sufficiently entertained to keep an eye out for them towards the end of the year.