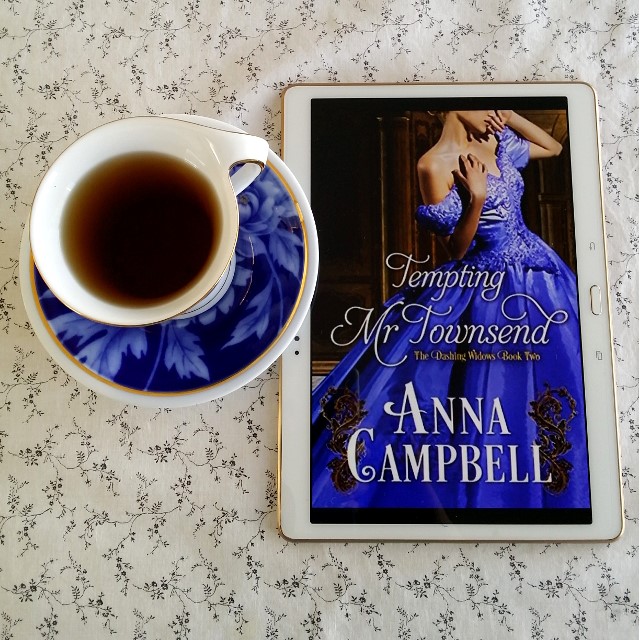 Beauty – and the Beast?

When Anthony Townsend bursts into Lady Deerham’s fashionable Mayfair mansion demanding the return of his orphaned nephew, the lovely widow’s beauty and spirit turn his world upside down. But surely such a refined and aristocratic creature will scorn a rough, self-made man’s courtship, even if that man is now one of the richest magnates in England. Especially after he’s made such a woeful first impression by barging into her house and accusing her of conniving with the runaways. But when Fenella insists on sharing the desperate search for the boys, fate offers Anthony a chance to play the hero and change her mind about him. Will reluctant proximity convince Fenella that perhaps Mr. Townsend isn’t so beastly after all? Or now that their charges are safe, will Anthony and Fenella remain forever opposites fighting their attraction?

Anna Campbell’s Dashing Widows series features three widows who have finally come to the end of their mourning period and vow to each other to seize life once more. In Fenella’s case, her required mourning period ended some time ago; her affection for her husband meant her grieving was protracted. In the previous book, The Seduction of Lord Stone, her friends Caroline and Helen convinced her enough was enough: it was time to move on.

I enjoyed the way Fenella genuinely loved her first husband. It makes a contrast to typical narratives–and, indeed, the situations of her two friends. It gives Fenella a bit of a different perspective on marriage, but also provides an obstacle to her relationship with Anthony. Her hang-ups about remaining faithful to her first husband are understandable but felt perhaps a little contrived, and I was glad she didn’t hang onto them too long.

Fenella was a great character. Society might view her as a fragile beauty, but she has a backbone and a good head on her shoulders. She might be high society, but that doesn’t make her judgemental and she’s good at giving others the benefit of a doubt.

Anthony is the more passionate of the two, being quicker to anger and quicker to lust. I found him a little bit possessive too early on, but this angle was handled lightly and he retains his self-control. In fact, his self-control was one of the things I liked most about this character. Even when angry, it was clear that his anger stemmed from his affection for his nephew and he allows himself to be talked around pretty easily. Really, he’s a toasted marshmallow–a bit crusty on the outside but total goo in the middle.

Without the need to set up for the series, we don’t see much of the other widows. This allows the focus to remain firmly on the romance. However, they do appear for a key scene. More of Caroline and Silas’ story comes out in this scene. While it was nice to have this sort of interweaving, I feel that it undid some of what was interesting about the ending of the previous book.

However, overall, I found Tempting Mr Townsend a quick, light read and just what I wanted.