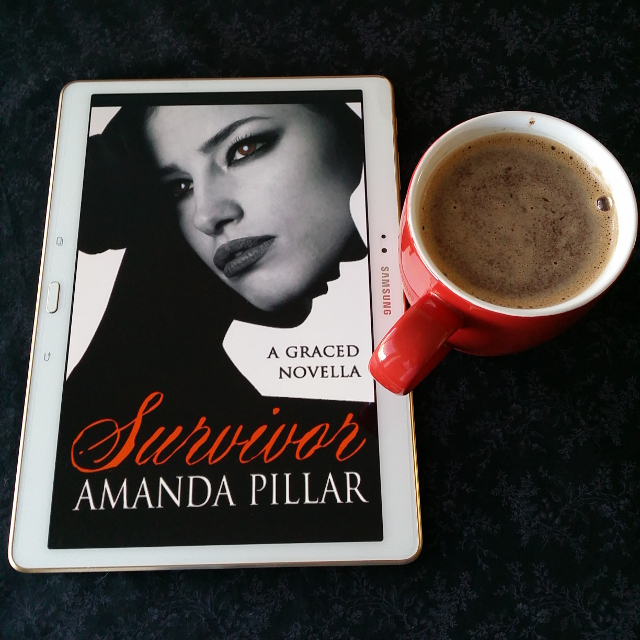 Billie Young is a city guard from Pinton with a troubled past — she was kidnapped, tortured and almost murdered by vampires. Though she managed to survive her attack, it’s left her scarred and damaged. Now, she wants revenge.

Vere Radcliffe is a vampire spy who answers directly to the king. Recently returned to the city, he’s stuck living with his family — a fate almost worse than death. But trouble is brewing in the streets of Pinton, and Vere is asked to investigate the abduction of a city guard and the murder of several other humans.

Can Vere and Billie work together to find the killers, before it’s too late?

Survivor is the second of Amanda Pillar’s Graced novellas to come out this year. The prequel novella, Captive, didn’t quite work for me but Survivor hit all the right notes.

As the title suggests, Billie is a survivor–a fighter and an optimist, though the latter is somewhat subsumed by her adorable grouchiness towards Vere. Her attackers left her with plenty of scars and a limp that gives her chronic pain. While she’s determined not to let this slow her down, she’s still sensible about the limitations it puts on her life. Billie has stepped away from active duty in the City Guard, realising that her injuries would put a partner at potential risk, but that doesn’t stop her from seeking out the culprits responsible for the attack.

It’s Billie’s stubborn independence that attracts Vere to her in the first place. The way he follows her around at first could seem patronising or puppyish, but it never comes across that way. Instead, Vere’s curiosity and respect for Billie shines through. He is genuinely considerate, though how he managed to develop that quality in his family remains a mystery. In fact, given Vere’s colouring and weak vampire traits, I found myself wondering whether there was more to Vere’s background than the story revealed.

I don’t usually get along with serial novellas, finding they don’t have enough space to properly deal with all the elements they’re juggling. I never felt that way with Survivor. It is set in the same city as Graced and several minor characters make reappearances. However, both Billie and Vere are new characters and their story stands on its own. There are one or two places where repercussions from Graced can be seen–which was something I loved. But overall, Survivor makes a reasonably good introduction to the world and is littered with characters I’m looking forward to learning more about (the captain of the City Guard springs to mind).

The romance between Billie and Vere was sweet and balanced nicely with the investigation elements. Sex took place off-screen, making it a good story for readers who find explicit depictions uncomfortable.

There was one or two aspects of the ending I found a bit disappointing, but they are difficult to discuss without spoilers.

However, overall, I very much enjoyed Survivor and hope to see more stories set in this world.

One thought on “Survivor by Amanda Pillar”