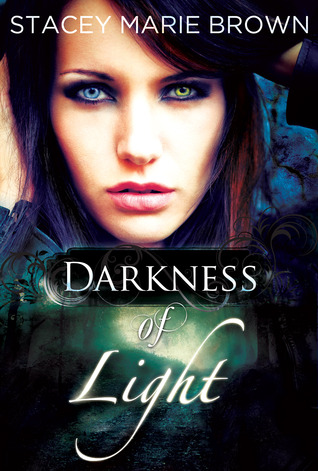 Ember Brycin has been called them all. She’s always known she’s different. No one has ever called her normal, even under the best circumstances. Bizarre and inexplicable things continually happen to her, and having two different colored eyes, strange hair, and an unusual tattoo only contributes to the gossip about her.

When the latest school explosion lands her in a facility for troubled teens, she meets Eli Dragen, who’s hot as hell and darkly mysterious. Their connection is full of passion, danger, and secrets. Secrets that will not only change her life, but what and who she is–leading her down a path she never imagined possible.

Once again I’m reminded that I really should read things more closely before requesting review copies on NetGalley. Darkness of Light had a nicely readable style, but the story didn’t really work for me.

The biggest problem was Ember herself. She isn’t the brightest spark, despite her name. She might have always known she’s different, but she’s still remarkably slow to accept it. Part of this is the unevenness in what she’s willing to believe. Telepathy and technomancy pose no problem, but apparently she’d rather think of herself as mentally ill than accept she sees strange creatures or has significant dreams.

The book seemed to be trying to set up a love triangle, but if so, it was a very lopsided one. Torin comes to her only in her dreams and their interaction is mostly limited to him trying to give her a clue in the most patronising and cryptic way possible while Ember drools over him. Eli gets much more screen time and a chance to develop a bit more depth. The push-pull dynamic of their relationship reminded me somewhat of Twilight, but the reason for that is given a slight twist, which I appreciated.

However, in some respects, I felt Eli got a little too much screen time. The bulk of the book is preoccupied with his relationship with Ember and it threw off the pacing. A lot of action got jammed in at the end of the book, making it feel rushed, and there were some elements that could have used more foreshadowing.

Ember’s friends were probably my favourite part of the book, though they suffered a little from being somewhat stereotypical. That said, there were some nice hints that something more was going on with shy, bookish Kennedy that will presumably be teased out in the sequels.

Not that I intend to read that far. Self-aware cliche is still cliche. Darkness of Light was not the book for me.

2 thoughts on “Darkness of Light by Stacey Marie Brown”