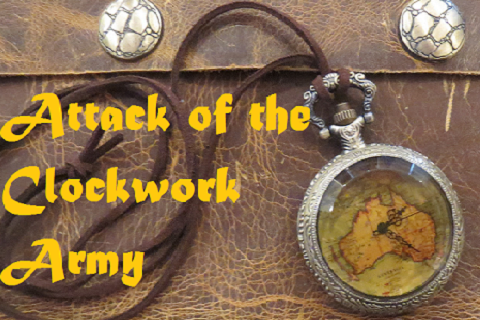 Win the Steam-Powered Fight for a Nation!

When the battle for Australia begins, will you join Her Majesty’s new clockwork army to keep Australia peacefully British once and for all–or will you cast your lot with a ragged crowd of ex-convicts?

Will you be a deadly fighter, or torn between the conflicting loyalties of those you love? Can you overcome your fatal flaw before it’s too late?

Are you ready to turn the tide of history? Play to find out!

Attack of the Clockwork Army isn’t quite like the usual books I review–it’s really more like a cross between an e-book and a text-based computer game. That’s because Attack of the Clockwork Army is a work of interactive fiction, a Choose-Your-Own-Adventure for modern-day adults. In addition to deciding on the direction of the narrative, readers are offered the chance to decide on certain character traits of the protagonist. These include a number of options for gender, sexuality, religion, strengths and flaws.

As with Choose-Your-Own-Adventures, the narrative is written in second person. The text is broken up into manageable chunks, with a choice being offered after every few paragraphs. I found this staved off visual overwhelm and kept thing dynamic.

The cast is diverse, featuring characters of Indigenous and Asian descent. Despite the somewhat patriarchal setting, the women are shown as being equally capable as the men when it comes to both wit and martial prowess. The gender balance of characters comes fairly close to even, which I appreciated.

However, Attack of the Clockwork Army is not likely to appeal as much to people looking for character-driven story. The interactive component makes it a primarily action-driven story, and therefore more likely to appeal to lovers of adventure (after all, it is Choose-Your-Own-Adventure). Additionally, a single reading of Attack of the Clockwork Army is approximately 20,000 words, which doesn’t leave a whole lot of space for character development around the action.

Similarly, the setting was intriguing but not explored in much depth. I was particularly intrigued by the notion of Australia as being originally a more lush continent until colonial powers started messing with the weather.

It is the sort of storythat rewards multiple readings. There were a couple of events that seemed somewhat arbitrary on my first time through but whose logic became evident when I followed other paths. Indeed, finding out what happens along those different paths was one of the biggest appeals to me.

Overall, I found it a novel reading experience for lovers of steampunk and adventure.

One thought on “Attack of the Clockwork Army by Felicity Banks”