To get things bubbling away, Stephanie Gunn joins me today. She is a talented writer and one of the most astute reviewers I’ve come across. On top of that, she is one of the hard-working judges of the Aurealis Awards and has contributed a lot to the Australian speculative fiction community.

When the world falls down:

Everyone has an origin story, a once upon a time, a call to adventure. This is mine. This is the story of how my world fell down, and how, in the pieces of that world, I found a new home.

In my early twenties, I was midway through a PhD in genetics/immunology. I was going to my first overseas conference in New York to present some of my research, after which I was going to travel to England for a holiday. Stepping onto that plane, everything seemed full of possibility. Every since I was a little girl, I had wanted to be a doctor. This wasn’t the medical career I had planned for, but medical research was close enough.

The moment I set foot on English soil, I got sick. Just a bad cold or flu, I told myself. I took cold medication and dragged myself through the rest of the trip. I coughed badly enough that I developed laryngitis, and I barely slept. There’s a photo of me standing at Stonehenge–a place I had always dreamed of visiting, much as I’d always dreamed of being a doctor. I barely remember being there.

When I came home, my doctor told me to rest, not to speak. Told me I’d get better.

My voice came back, but the crippling fatigue remained. I developed severe joints pains, had awful migraines, constant nausea, brain fog. I slept and I slept, and I always woke up feeling exhausted.

For the next few years, I struggled to keep working on the PhD. Eventually, after many appointments and tests, I was diagnosed with fibromyalgia, then an undifferentiated connective tissue disease (an autoimmune disease in which my body was producing antibodies against my connective tissue). I transferred my PhD enrolment to part time, started on medication. I kept pushing, still thinking that I was going to get better.

I felt acutely that I was letting everyone down. My supervisors were amazing, but I could tell that my work wasn’t what it once had been. I was always exhausted, always in pain, and sometimes the brain fog was thick enough that I lost words when I was speaking. I would try to be the first person in the lab in the mornings, thinking I could at least do that, but I was always limping my way home at lunchtime, to sleep away the afternoon.

I finished my degree and felt no achievement in it, just the sense that it should have been better. I was too ill to go to my graduation. No pictures of me standing in robes, just a degree unceremoniously delivered in the mail. Everyone else I was studying with went on to productive careers. I went onto the Disability Support Pension.

Every time I look at that degree on the wall, I feel a sense of failure. I feel that I let everyone down.

I had always been a voracious reader, and had always written. In my late teens, I had attempted to get work published, with no success (and rightly so, for that work was truly dreadful). As I had devoted more and more time to study, the writing had mostly been pushed aside. I always planned to write, but science would be my main career.

After I graduated, I battled with a severe depression. When I was really ill, I could barely read. My life consisted of moving from my bed to the couch, being almost totally dependent upon my mother. Slowly, however, I learned to manage my illness better, and I started to be able to read again. And I started to write again.

The internet was the greatest blessing I had in those years (other than my parents, who always supported me unconditionally). Through the screen of my laptop, I discovered a community: people who loved reading the same kinds of books I did, people who reviewed them, and the people who wrote them.

I came across people like Laura Hillenbrand, who wrote best-selling novels despite suffering from Chronic Fatigue Syndrome. And realized that, even though I’d lost my career as a scientist, I could still be a writer.

Slowly, I started branching out more, volunteering my time and energy to contribute to the speculative fiction community. I reviewed books for Horrorscope, then AsiF, then moved to reviewing on Goodreads and my own blog, the latter spurred on by joining the Australian Women Writers Challenge. I started reading slush for Andromeda Spaceways Inflight Magazine. I volunteered to judge the Australian Shadows Awards, then the Aurealis Awards, convening panels for the last few years.

It is hard for me to find the words to describe how much it means to be a part of this community. To have people who have trusted me enough to judge awards, to have editors who have liked my work enough to pay me for it and publish it. To be listened to. To be valued.

I have met so many amazing people in this community. So many of us are drawn to speculative fiction because we feel like outsiders. And yet, in this strange place–sometimes virtual, sometimes real–we find a kind of family, people who are like us. There are people who deal with chronic illness and disability, people who fight for feminist issues, people who believe that this world can be more than what others have made it. People who welcome, people who look beyond physical ability.

I discovered, years down the track, that there were people I worked with in science who doubted that my illness was real. In the speculative fiction community, no one has ever doubted me. No one has ever thought I was being lazy when I needed to sit down, or looked askance at the times I’ve needed to use a cane. No one takes offense if I need to leave early, or if I can’t go to something because I’m not doing well.

If I could go back in time and speak to that women boarding her flight to New York, if I had the opportunity to stop her from getting that flu, I’m not certain I would. There are limits to my life because of my illness, but there is a joy and value in spite of it. I aim now to give back as much as I can to the speculative fiction community by judging awards, buying books, reviewing them.Valuing others, no matter what. Hoping that I can be a part of helping others if their own worlds fall down. 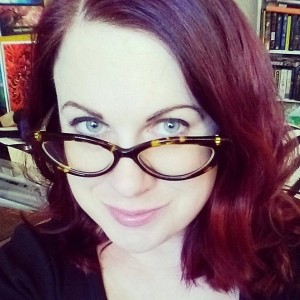 Stephanie Gunn is a writer of speculative fiction whose short stories have appeared in anthologies such as Bloodlines, Kisses by Clockwork, Bloodstones, Epilogue, Grant’s Pass and Hear Me Roar. In another life she was a research scientist, but now spends her time writing, reading and reviewing. She has reviewed for Horrorscope and AsiF, and now posts reviews on her own website, most of which are part of the Australian Women Writers Challenge. She has been nominated for Ditmar and Tin Duck Awards, and has won the latter for fan writing. She has judged for both the Australian Shadows and Aurealis Awards. She lives in Perth, Western Australia with her husband, son and requisite fluffy cat, and is currently at work on a contemporary fantasy novel. You can find her at stephaniegunn.com.