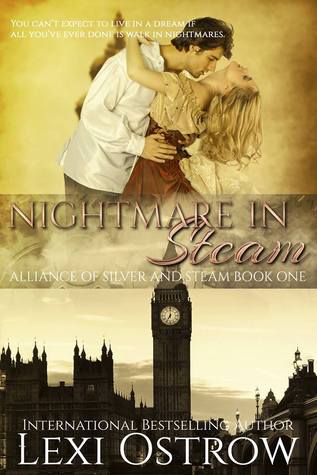 Lucius is a Nightmare Demon with the power to invade dreams and frighten people to death. On a mission to infiltrate the Alliance of Silver and Steam–a demon-hunting organisation–he encounters their top inventor, Eliza Dorley, and finds himself falling dangerously in love.

If you’re looking for a steampunk adventure with romantic themes, look elsewhere. The steampunk elements in this book are mostly set dressing for an paranormal romance/erotica and are likely to disappoint dedicated speculative fiction readers.

Although this is meant to be the first book in the series, it quickly became clear that this wasn’t the first time the author had used the setting. Eliza and Lucius have friends in common who had recently become engaged, and the Alliance is already well established. This might explain a tendency to use info-dumping as a way of bringing the reader up to speed. The alternate history was one of the most interesting things about Nightmare in Steam, so I would have liked to see a little more time spent on setting up the world for new readers and a little less on the numerous sex scenes.

The villain, Seraphina, could also have used a little more screen time. Her backstory makes her motivation plain but her actions lack consistency and come across more as a way to drive the plot.

Lucius was charming and I enjoyed the way he remained pragmatic about who he was, even as he changed. The attraction between Lucius and Eliza was expressed well but I was never quite convinced by assertions that their relationship moved beyond the physical.

Overall, Nightmare in Steam wasn’t the right book for me.