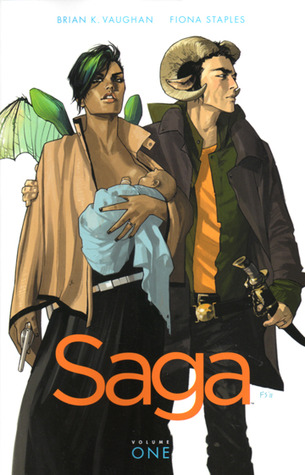 Two soldiers from opposing sides of a galactic war fall in love, desert their respective armies and have a baby together. Naturally, their commanders are less than impressed by this turn of events and want them killed. As if parenting a newborn wasn’t hard enough.

I’m late to the party on this one and I’m rather glad. The fast-paced narrative sucked me in from the very beginning and kept me turning the pages. The fourth volume has just been released and, even though I’m not that far through the series yet, I’m not looking forward to the wait once I catch up.

Volume One starts with the birth of baby Hazel on the war-torn planet of Cleave. Future Hazel serves as the narrator, though we don’t hear from her a lot. Mostly, the focus is on her parents, Marko and Alana, as they try to get off the planet alive. These two really made the comic for me. Marko is a badass swordsman who became disillusioned with the pointlessness of the war. He’s also a total softie who is almost definitely going to be wrapped around his daughter’s little finger when she grows up (provided they survive that long). It will be up to Alana to be the strict one in this parenting duo and she shows herself to be more than capable of the role. She may be somewhat vulgar but she has a backbone of steel as she drags her family out of some tight spots.

My one complaint was that Saga, like Alana, tended to be a little on the vulgar side for my tastes. I’m not fond of ‘retarded’ as a curse, even one applying to a situation. Alana is the subject of a disproportionate number of slurs compared to Marko. And there are enough boobs to keep HBO happy, should they ever decide to turn it into a TV series. That said, putting a breastfeeding woman on the front cover of the first volume earns it some respect from me.

The artwork is gorgeous. I love the use of colour and Staples has done an excellent job with the character design. In particular, I found the bounty hunter called The Stalk to be delightfully creepy. The warring armies sport a variety of horns on one side and wings on the other, rather than being two uniform races.

Being a space opera, the scope of the worldbuilding is epic and Volume One barely scratches the surface. I’ll be interested to see whether the next volumes dig deeper.

This is definitely a series I’m keen to continue, especially after the cliffhanger at the end of this volume.