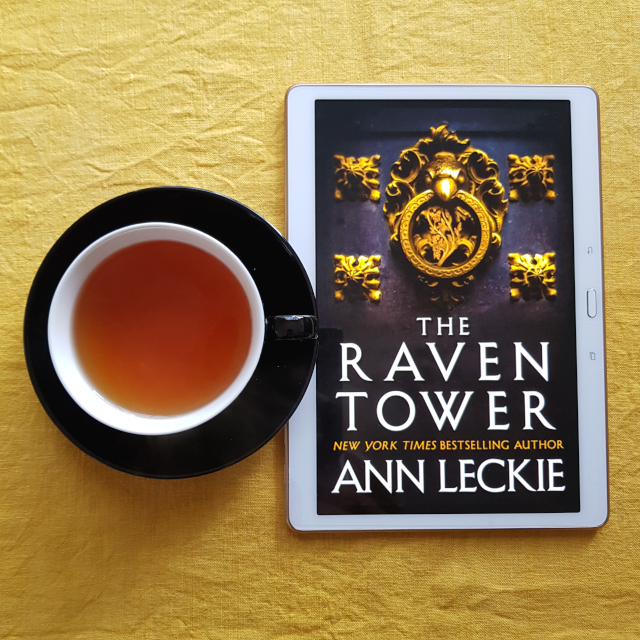 For centuries, the kingdom of Iraden has been protected by the god known as the Raven. He watches over his territory from atop a tower in the powerful port of Vastai. His will is enacted through the Raven’s Lease, a human ruler chosen by the god himself. His magic is sustained via the blood sacrifice that every Lease must offer. And under the Raven’s watch, the city flourishes.

But the power of the Raven is weakening. A usurper has claimed the throne. The kingdom borders are tested by invaders who long for the prosperity that Vastai boasts. And they have made their own alliances with other gods.

It is into this unrest that the warrior Eolo–aide to Mawat, the true Lease–arrives. And in seeking to help Mawat reclaim his city, Eolo discovers that the Raven’s Tower holds a secret. Its foundations conceal a dark history that has been waiting to reveal itself…and to set in motion a chain of events that could destroy Iraden forever.

The Raven Tower is an intelligent, well-written book but not one I actually enjoyed. While its ideas are interesting, its characters failed to engage me.

The story alternates between two threads. One is told in first person by a god who has taken the form of a rock. The story starts in the distant past and narrates the god’s journey to the present, telling of how it came to awareness, its growing connection with humans and its role in the war between the gods. The second story is set in the present and tells the story of Eolo, a warrior of Iraden. It is told in second person as the god narrates Eolo’s story back to him.

One of the things I enjoyed most about the book was the gods. It takes a bunch of old elements–such as the gods being active in the world, the idea of big and small gods, and the way they are sustained by the prayers and petitions of worshippers–and pieces them together in a way that feels fresh. The interaction between the gods serves to humanise them in some respects: they have their own petty squabbles but also friendships. They will hang out and discuss philosophy.

A key theme of the story is power and the power of words in particular. The gods’ powers are very much tied to words–what they speak must become truth if it is not already so. That manifestation relies on the god’s power, so they must only speak what they have the power to manifest or else run the risk of wiping themselves out. It’s a clever way of limiting the power of the gods and also leads to the very unique voice of the story. The narrator may not be able to lie, but they can hedge the truth and are quite transparent about doing so at times.

Unfortunately, this also lead to my key issue with the book. Because the god is narrating Eolo’s story, that part of the tale lacks interiority. The god cannot tell us what Eolo is thinking or feeling, else its power will be steadily drained away as the tale goes on. It does occasionally speculate what might have been the case, but elsewise the reader must read between the lines. This isn’t onerous, but it also isn’t satisfying. I found it created a distance that I could never quite bridge, making the experience an intellectual one. The lack of a strong emotional element left me unable to connect with the characters in any meaningful way.

One thing I was pleased to see was the way Leckie continued her tradition of including diverse characters. Most notably, Eolo is a transgender man, but in the background very little of the cast is white. Nor is this lampshaded or made a big deal of in a way that effectively shows this is (or should be) a normal thing.

All in all, while The Raven Tower is a clever tale, it is just not the book for me.

4 thoughts on “The Raven Tower by Ann Leckie”