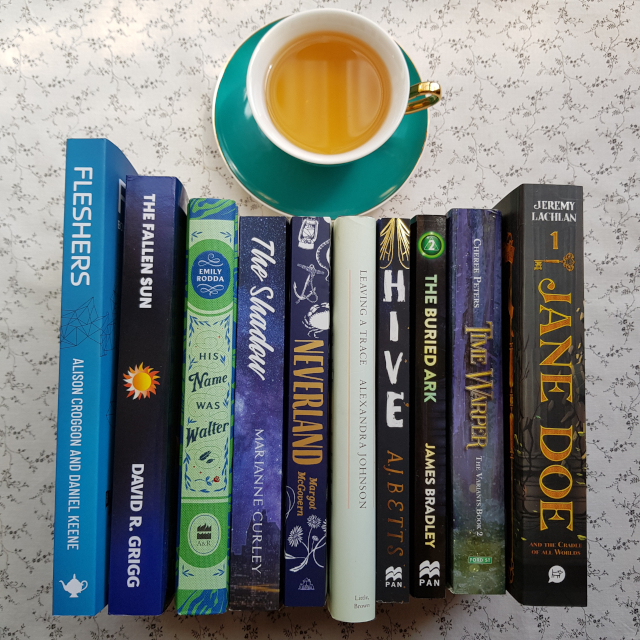 Happy New Year! I hope those of you celebrating had wonderful holidays. I had a good break and was glad to spend some time with my family. The only down side was I didn’t get as much reading done as I would have liked.

Fantasy remained my most popular genre, making up about 40% of my reading. I read less romance this year (which rather surprises me) and more science fiction and non-fiction.

32% of the books I read were written by Australian authors. Considering all the Aurealis reading I did, I’m surprised it isn’t higher.

44% of the books I read were from authors I consider diverse. This is an improvement on 36% on last year. However, I feel I could be doing better in relation to books by PoC authors.

My consumption of e-books was a little over 50%, a figure that has remained more or less steady since 2015. I’m liking this balance.

My mean rating (out of 5) was 3.4, which has held more or less steady over the last few years and suggests I’m still probably being a bit generous with my ratings… or sensible enough to ditch books that aren’t working for me.

These numbers probably don’t mean much to anyone else, but I have such fun keeping track of them throughout the year. I’m looking forward to seeing what 2019 brings.

141. Blackwood by Pia Foxhall. Paranormal m/m romance. Wildlife photographer Braden Payne is good at concealing the fact he’s an omega shifter. However, things begin to unravel when he finds himself stranded in a remote forest in Western Australia. I’m really not one for shifter fiction–the whole macho alpha schtick really doesn’t do anything for me. Which is why I liked this book so much. It does a good job of pushing back at tropes around toxic masculinity and deals sensitively with sexual trauma.

142. Fleshers by Alison Croggan and Daniel Keene. Read for the Aurealis Awards. A YA cyberpunk. Dez has an amazing gene-spliced talent for hacking, but even that might not be enough to save her when she kills a cop invading her home.

143. Flight of the Fantail by Steph Matuku. A busload of teenagers crashes in a remote part of New Zealand. This is a YA thriller with supernatural elements, which I won’t talk about so as not to spoil the story. It is an impressive debut, well paced and tense.

144. Messenger by K.S. Nikakis. Read for the Aurealis Awards. Severine is adopted, raised in a world where women are scarce. Chance leads her to meet her father, which in turn sets her on an adventure she could never have imagined.

145. The Shadow by Marianne Curley. Read for the Aurealis Awards. Fourth book in the Guardians of Time series. YA fantasy. The Guards have won the war but are finding it hard to move on, especially Ethan, who has lost the love of his life. However, it turns out the war might not be as finished as they thought.

146. Alpha Minor by Simon Haynes. Read for the Aurealis Awards. Second of the Harriet Walsh books. YA sci-fi. Harriet is mistaken for her adopted sister and kidnapped by treasure hunters.

147. Leaving a Trace: On Keeping a Journal by Alexandra Johnson. Non-fiction, pretty much what it says on the label. I didn’t find the offered exercises to be all that useful (in part because I’m a seasoned journaleer and partly because they just weren’t my style), but I found some inspiration in the way the author wrote about journaling and unpacked the different kinds of journals.

148. Jane Doe by Victoria Helen Stone. Contemporary thriller. Jane is a sociopath who returns to her hometown in order to seek revenge. This book was a Christmas gift to a family member. I dipped into it just to make sure it was appropriate for them, then whoops! I finished the whole thing in one sitting.

149. Neverland by Margo McGoven. Read for the Aurealis Awards. YA magic realism. After a suicide attempt, Kit returns to the island where she grew up in order to be committed at the psychiatric hospital her uncle runs.

150. Sierra Bravo by Simon Haynes. Read for the Aurealis Awards. Third of the Harriet Walsh books. YA sci-fi. A criminal gang moves into the next town over. It is up to Harriet and the Peace Force to bring them to justice.

151. His Name Was Walter by Emily Rodda. Read for the Aurealis Awards. Part contemporary horror, part fairy tale. When their bus breaks down in the middle of nowhere on a school excursion, four students and their teacher take refuge in an old house. There they discover an old manuscript telling a fairy tale.

152. Guardians of the Round Table: Dexterity Fail by Avril Sabine, Storm Petersen and Rhys Petersen. Read for the Aurealis Awards. Portal fantasy. Four teenagers find themselves in the world of the video game they’re attempting to play.

153. Shadows Wake by Aiki Flinthart. Read for the Aurealis Awards. First book of the Ruadhan Sidhe series. YA urban fantasy. Rowan is constantly on the run, hiding a mysterious darkness within her from those who would use it for their own ends. When she accidentally reveals herself, she finds that she might not be as alone as she thought.

154. The Fallen Sun by David R. Grigg. Read for the Aurealis Awards. YA science fiction. In the far future on a distant and barren planet, society has regressed to the Middle Ages. Three teenagers find themselves pushing back against the prohibitions.

155. Shadows Bane by Aiki Flinthart. Read for the Aurealis Awards. Second book of the Ruadhan Sidhe series. YA urban fantasy. In order to rescue her mum, Rowan must continue to ally with those that betrayed her.

The Man on the Train by makeit_takeit. A Generation Kill au. Brad and Nate get to know each other on the train to work every day.

Foundations by sanguinity. A canon divergence from S2 of Elementary in which Marcus never quite heals and takes a different life path.

I’ve got a post on reading challenges lined up for the end of the week, so stay tuned for that. Aside from official challenges, I’ve decided to shake up the way I do things a little bit. I’ve not previously been one for mini TBR piles, but I found they’ve been helping to keep me focused in recent months. So, I thought I might try setting myself some monthly ones this year.

January’s pile consists of a whole lot of books for the Aurealis Awards, which I won’t bother listing here. In addition, I’ll also be tackling:

Aurora: Aurizon by Amanda Bridgeman. For review at EGE.

Tides of the Titans by Thoraiya Dyer. For review at EGE.

Descendant of the Crane by Joan He. For review at Skiffy & Fanty.

Six of Crows by Leigh Bardugo. Book club pick for February. This might get pushed back to February if I end up getting swamped (which is looking likely).

An Absolutely Remarkable Thing by Hank Green. Book club pick for March. My library hold came in way quicker than I was expecting.

Should keep me out of trouble, don’t you think?