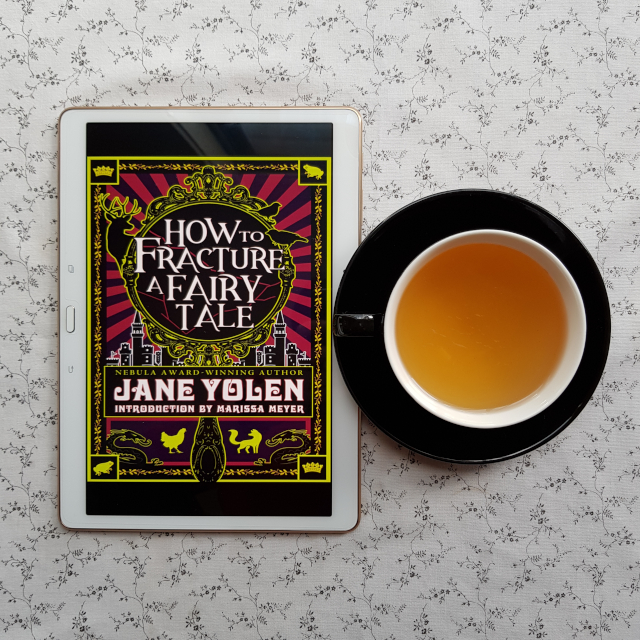 Fantasy legend Jane Yolen presents a wide-ranging offering of fractured fairy tales. Yolen fractures the classics to reveal their crystalline secrets, holding them to the light and presenting them entirely transformed; where a spinner of straw into gold becomes a money-changer and the big bad wolf retires to a nursing home. Rediscover the tales you once knew, rewritten and refined for the world we now live in―or a much better version of it.

How to Fracture A Fairy Tale collects stories and poems from across Jane Yolen’s long career and adds in a significant amount of new material. It covers not only fairy tales, but also myths and legends–such as Icarus, or Arthur and Guinevere.

The bulk of the book is given over to the stories, while the final 15% or so contains explanations of how Yolen put her own spin on each story and pairs it with a poem. I personally would have preferred each explanation and poem to immediately follow the story, in part because I have a terrible memory. However, it does allow readers to move easily from one story to the next. One could easily skip the poems and explanations if one wanted to… though I wouldn’t recommend it. I often found the poems to be punchier than the stories and many contained lovely imagery.

As with any collection or anthology, the material was a bit hit and miss for me. I felt many of the stories were more focused on ideas than emotions, making the fractured fairy tale an intellectual exercise. This is another reason I would have liked to see the explanations immediately follow the story.

Yolen has had a long and successful career. Many of the stories date back decades and I found myself noticing the ways they didn’t meet the standards of today in terms of representation. Although there are a few self-rescuing princesses, a lot of the gender roles remain traditional, with the women taking care of domestic chores, while the men are the hunters, bread-winners or rulers. I only noted two stories where a prominent character had been gender-flipped and both involved turning an avatar of death into a woman. By and large, people of colour appear only in stories where the entire story is set in a non-white culture. There were a handful of such stories.One Ox, Two Ox, Three Ox and the Dragon King rather rubbed me the wrong way, substituting a dragon with a Western temperament for the calmer Eastern one. But by and large, the remainder of these stories seemed okay–with the caveat that I’m not of the cultures represented and am therefore not the best judge. Unsurprisingly, the Jewish stories fared best and seemed to have the most heart, tapping into Yolen’s own background.

Being fairy tales, there was a lot of dark material. Stories come with trigger warnings for sexual assault, incest, concentration camps, and physical and emotional abuse. There was also some body shaming and sex shaming. Readers are advised to tread with caution.

Some favourites of mine included One Old Man, With Seals, which takes the Greek shapeshifting sea god Proteus and introduces him to a modern, retired librarian; Great-Grandfather Dragon’s Tale in which an elderly dragon tells his grandchildren the tale of Saint George and the split between dragons and men; and Mama Gone, yet another story about a dead mother… but one who returns as a vampire. Of the poems, I liked Warning from the Undine, a nicely sinister poem with a more traditional rhyming scheme than most of the other poems in the collection; To Be Paid, a satisfying and rather political poem about writers taking vengeance through their art; and When I was a Selchie, a poignant meditation written after the death of her husband.

All in all, How to Fracture a Fairy Tale shows the span of an impressive career, but it’s a collection that needs more inclusivity for a modern audience.