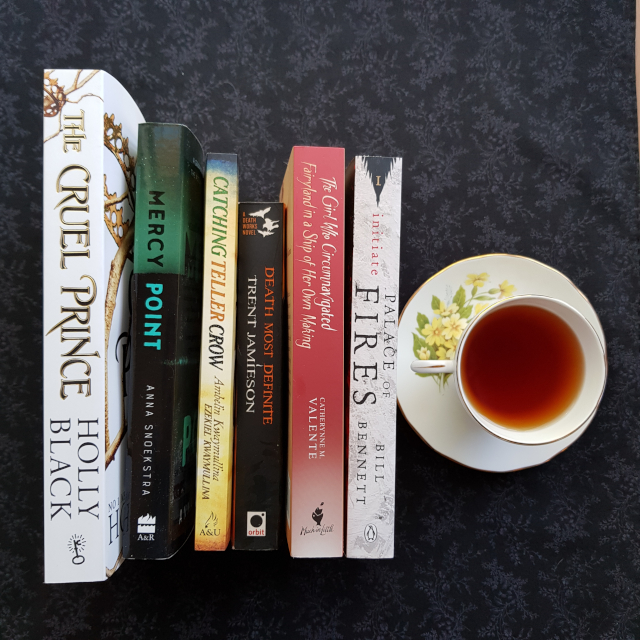 October was my birthday month and one of my gifts was a Kobo e-reader (to help me break free of Amazon’s evil clutches). So, I might have got a little excited with purchases. I also borrowed a pile of books on journaling from a friend. Even my voracious reading this month wasn’t enough to help me keep up with all the acquisitions.

116. City of Miracles by Robert Jackson Bennett. Last of The Divine Cities trilogy. Sigrud, a former spy and thug, comes out of hiding after thirteen years when he hears a good friend has been assassinated. A brilliant conclusion to the series, though it has a little more of an actiony, James Bond feel than the others. I enjoyed the reincorporation of a previously minor character and the way the story showed the impact of previous events on her. Right to the end, the series has been thoughtful in its worldbuilding and exploration of themes. Highly recommended.

117. Deadly Passion by Amanda Pillar. First of the Heaven’s Heart series. Paranormal romance. A part-demon assassin is forced to team up with a fallen angel to assassinate an old god and retrieve a rare artefact. Fast-paced fun (especially if you like sassy heroines), but I ultimately found it forgettable. That said, the sentient cabin was rather amusing.

118. How to Suppress Women’s Writing by Joanna Russ. Non-fiction, pretty much what it says on the label. Still depressingly relevant.

119. A Princess in Theory by Alyssa Cole. First of the Reluctant Royals. Naledi is juggling study, two jobs and an alcoholic best friend. She doesn’t have time for ridiculous emails claiming she’s a prince’s long-lost betrothed. However, Thabiso is determined not to be ignored. I do love me a capable heroine and Naledi has that in spades. I found it very relatable the way she learns to lean on others for help… even if her best friend has made that difficult.

120. A Duke by Default by Alyssa Cole. Second of the Reluctant Royals. Portia is trying to get her life together after almost losing her best friend. She takes on an apprenticeship with a Scottish swordsmaker and the sparks between them fly. It was nice to see a heroine portrayed with ADHD. I loved the characters, especially Cheryl. However, I felt the story was trying to do too many things and I found the climax veering a bit towards the silly for my taste.

122. Snowspelled by Stephanie Burgis. The first of The Harwood Spellbook series. Alternate-history-infused fantasy. Four months after losing her magic, Cassandra finds herself at a house party with her ex-fiance. The pair are thrown together when they’re called upon to rescue some fellow house guests. Charming and exactly what I needed. It had a nice balance between the fantasy and romance elements, as well as doing some interesting things with gender and worldbuilding.

123. A Curse of Ash and Embers by Jo Spurrier. Read for the 2018 Aurealis Awards. A Gothic-influenced YA fantasy about a young woman summoned to work in a cottage in the mountains. When she arrives, she discovers her employer is a witch.

124. Halloween is Not A Verb by Tansy Rayner Roberts. Fourth book in the Belladonna University series. A fantasy novella in which witches Hebe and Holly bring their friends home for an Australian Halloween. A fun story totally appropriate for the season.

125. Death Most Definite by Trent Jamieson. First of the Death Works Trilogy. Urban fantasy set in Brisbane. Someone is killing off Australia’s Pomps–the people responsible for sending spirits on and keeping the zombie-like Stirrers from taking over the world. Steven has never taken the family business all that seriously, but he’s going to have to start if he wants to survive. Some great action and pacing. But the romance really didn’t work for me and rather put me off the rest of the series.

126. Graevale by Lynette Noni. Fourth of The Medoran Chronicles. Read for the 2018 Aurealis Awards. A YA fantasy in which Alex tries to warn the peoples of Medora about the forthcoming battle, now that the evil Aven has taken his throne.

127. A Small, Charred Face by Kazuki Sakuraba, translated by Jocelyne Allen. A young boy is adopted by a pair of vampires after his family is murdered. A poignant meditation on the desperation and hope inherent in life. The book was actually three interconnected stories and I enjoyed the different perspectives they brought and the way they filled out the life cycle and history of the vampires. Comes with trigger warnings for sexual assault and animal death.

129. A Chocolate-Flavoured Bargain by Stephanie Burgis. Having had her first taste of chocolate, Marina comes to the city determined to apprentice to a chocolate-maker. On the voyage, she learns a thing or two about presentation and love. This story is a prequel to The Dragon with a Chocolate Heart and tells the story of two of the supporting characters. Short and sweet.

131. The Cruel Prince by Holly Black. Dark fantasy YA. After a fae general kills her parents, Jude and her sisters are raised by him in the fae world. As a human, she’s at the mercy of the fae and their glamours, and vows to do everything she can to gain power. I love Holly Black’s work and I appreciated the way this one touched on what it’s like to live under oppression. However, I found it a little predictable in places.

132. Spellswept by Stephanie Burgis. Prequel short story to Snowspelled. Amy is the assistant to the most powerful woman in the nation. She has her life all planned out: marry the right man and join the ruling council. However, on the night of the Spring Equinox, all Amy’s careful plans begin to unravel. Another delightful story, cementing Stephanie Burgis as a new favourite author. I can’t wait for the next book.


For Real by Alexis Hall

Scourge of the Seas of Time (and Space) edited by Catherine Lundoff
Daring Greatly by Brene Brown
Woman on the Edge of Time by Marge Piercy
Grass by Sheri S. Tepper

The Ghost Engine by Theresa Fuller
Leaving a Trace by Alexandra Johnson
Note to Self by Samara O’Shea
Writing and Being by G. Lynn Nelson
Journalution by Sandy Grason
Journal to the Self by Kathleen Adams
The Girl Who Circumnavigated Fairyland in a Ship of Her Own Making by Catherynne M. Valente

Clasp Hands by Stephanie Burgis. A young witch just wants to join her mother’s coven to celebrate the end of a particularly difficult year. This is a touching story, full of warmth and yearning, with a dash of grief. The witches are vivid and full of personality. Perfect for a cold evening.

And Her Smoke Rose Up Forever by James Tiptree Jr. Read for the Lady Vaults book club. A man finds himself relieving memories of profound emotion. The main character is quite abhorrent and the story ultimately feels pointless… though that seems by design. However, it doesn’t make for the best introduction to Tiptree.

Christopher and Elinor by Mercy. A Jane Austen fanfic retelling of Sense and Sensibility in epistolary format and pairing Elinor Dashwood with Colonel Brandon. Charming, albeit a bit repetitive in places. I found the match convincing, perhaps because Emma Thompson and Alan Rickman made it easy to picture. Thanks to Kay from Not Now I’m Reading for the rec.

The Man Who Walked Home by James Tiptree Jr. Read for the Lady Vaults book club. Several decades after an explosion sets off a global apocalypse, a strange apparition begins to occur annually. Although the early parts of the story gave a good sense of time passing and the recovery of civilisation, the story really hooked me once it zoomed in and gave me some characters to relate to. The later stages demonstrate some brilliant tension.

The Last Flight of Doctor Ain by James Tiptree Jr. Read for the Lady Vaults book club. Follows the journey of a scientist on his way to an international conference in a world where pollution is on the rise and the environment is being devastated. The story rather lacked clarity in some places, but I appreciated its preoccupation with environmental concerns and I found it somewhat cathartic to read.

And I Awoke and Found Me Here on the Cold Hill’s Side by James Tiptree Jr. Read for the Lady Vaults book club. A young journalist with a fascination for aliens finds himself on a space station, where one of the employees tells him a cautionary tale. This was one of the stories I enjoyed the least, but it does show some of Tiptree’s reoccurring themes of sex, death and biological determinism. She doesn’t strike me as much of an optimist in relation to humanity (and I’m not sure I can blame her).

Love is the Plan and the Plan is Death by James Tiptree Jr. Read for the Lady Vaults book club. This was a strange, but beautiful story about the life cycle of an alien creature. Tiptree really shows off her poetic skills. However, it seemed like a wonderful allegory which I did not have the context to unlock.