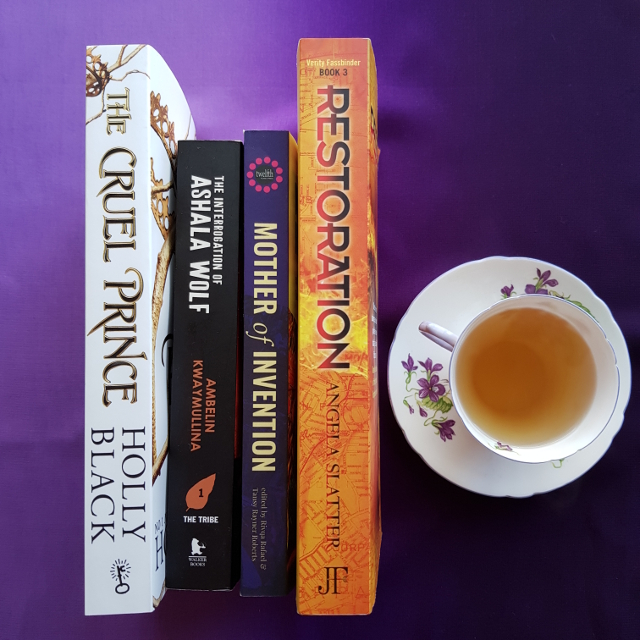 My Mt TBR cracked 400 books this month; I may have a problem. I can’t even blame it on the Aurealis judging this time. Instead, I found myself picking up a lot of romance novels… even though it’s going to take me a while to get to them.

93. One Hell of a Ride by Seanan McGuire. A short story in the InCryptid series. Jonathan Healy is returning home with the lovely Frances Brown in tow. However, their journey proves a bit more eventful than expected when their train drives through a portal to Hell. An enjoyable story with some classic train fighting sequences. However, I ultimately found it lacked tension.

94. Wanted, A Writer by KJ Charles. An epilogue to the m/m romance novel Wanted, A Gentleman. After waking up with a hangover, Theo is offered a dream job… but one that poses a risk to the happy life he shares with Martin. Sweet, and the ties to a historical event were a fantastic touch. But once again I found it ultimately didn’t add much to the wider story.

97. Frankenstein by Mary Shelley. Technically a reread, but this particular version was a genderswapped version read by Tansy Rayner Roberts. It made me a lot more aware of my assumptions around gender.

98. The Butterfly Stone by Laurie Bell. Read for the Aurealis Awards.

99. A Glimmer of Silver by Juliet Kemp. Review forthcoming.

101. Revenant Gun by Yoon Ha Lee. Last book in the Machineries of Empire series. Hexarch Nerai Kujen revives a young version of Shuos Jedao to pit him against the older version. I admit I was a little lost at times, which perhaps explained why I didn’t feel it had quite the emotional punch it should have.

The Spoils of the Spoiled, Chapters 1-11 by not_poignant. A contemporary AU of not_poignant’s Fae Tales. Gwyn and Augus are students at a boarding school. As the scholarship kid, Augus resents Gwyn, whose family pretty much owns the academy and half the town. However, he soon comes to realise the golden boy isn’t exactly leading a charmed life. Comes with some heavy trigger warnings for explicit content, domestic abuse and dubcon.

As Green as the Ragged Grass, Chapters 1-2 by not_poignant. Another contemporary AU in which Gwyn is a young arborist employed to tend the grounds belonging to the stately, older Augus. Again, a warning for explicit content.

The rest of this is pretty much all Spiderman: Homecoming fanfic featuring Peter Parker/Michelle Jones.

The Cosmic Conspiracy Parts 1-4 by nire. A series of soul bond AU one-shots. I’m not generally into soul bonds… but neither is MJ. I also enjoyed the friendship between MJ and Liz.

the only falling i want to do is for you by AppleJuiz. The Green Goblin kidnaps MJ but she doesn’t come quietly. Kind of merges Spiderman: Homecoming with Tobey Maguire’s Spider-man, but with added sass from MJ.

there’s nothing fake about the look in your eyes by AppleJuiz. Peter asks MJ to be his fake date to one of Tony’s functions.

the only room with a view by AppleJuiz. Peter commissions MJ to paint the view of his third favourite skyline. Beautiful fluff.

any universe with you can’t be the darkest timeline by AppleJuiz. Peter accidentally finds himself in the wrong timeline. Contains spoilers for The Avengers: Infinity War.