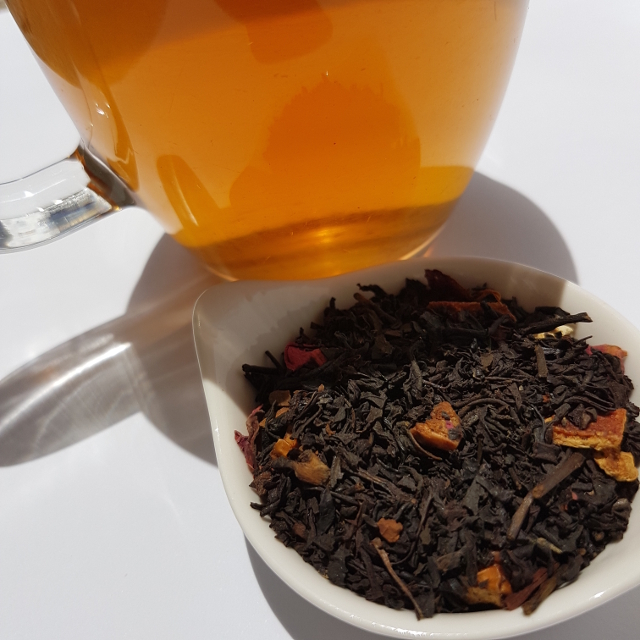 Loose-leaf Links is a feature where I gather together the interesting bits and pieces on sci-fi, fantasy and romance I’ve come across and share them with you over tea. The year is winding up and this will be the last Loose-leaf Links post for 2017. Earl Grey Editing will be taking a short hiatus between Christmas and New Year. So, it seems only appropriate that today’s tea is Christmas Tea from Glenbog Fine Teas. The tea includes lemon peel, apple, aniseed, cinnamon and rose petals, giving the impression of citrus and gingerbread.

Awards season is well and truly gearing up. The Aurealis Convenor’s Award for Excellence is open for nominations until 31 December. It’s awarded for achievement in speculative fiction not otherwise covered by the Aurealis Awards, meaning non-fiction, artwork, film, television, electronic or multimedia work are all eligible. The Earl Grey Editing blog was a nominee earlier this year.

Recommendations are already open for the 2018 Tiptree Award. The Tiptree recognises works of science fiction or fantasy that expands or explores our understanding of gender.

The Australian equivalent of the Tiptree is the Norma K. Hemming Award. Organisers will be taking applications from potential jurors until 15 December. (That muttering in the background is me reminding myself I have enough reading commitments right now.)

The organisers of the Australian Shadow Awards (Australia’s premier horror awards) are also looking for judges. If you are an active (or lapsed) member of the Australasian Horror Writers Association (AHWA) email Joseph Ashley Smith at [email protected]com.

Congratulations to Kaaron Warren who has been named one of the judges for the 2018 World Fantasy Award.

The winners of the Goodreads Best Books of 2017 were announced. I can’t say I’m all that impressed at the results for the Science Fiction and Fantasy categories.

The Down Under Fan Fund is taking nominations for 2018 candidates until 31 January. One Australian or New Zealand candidate will be sent to the US to attend WorldCon 76 in August.

Congratulations to Laura E. Goodin, who is joining Fafnir (the Nordic Journal of Science Fiction and Fantasy Research) as their Editor-in-Chief.

Over at Book View Cafe, Gillian Polack writes about a recent trip we took out to the former space observatory at Honeysuckle Creek. We learned that the possums are not shy, particularly when it comes to honey cake.

Buckle in, folks. The SFF short fiction review site Rocket Stack Rank and its creator Greg Hullender recently created controversy with its list of Best LGBT SFF from 2015 & 2016. Bogi Takacs took a very thorough look at RSR’s problematic history with non-binary, transgender and PoC characters and creators. Several authors came together with Bogi to write an open letter expressing concern over the patterns of behaviour and RSR’s influence on the industry. Over 100 others co-signed in the comments. Locus Magazine quickly responded by removing Hullender from involvement with their Recommended Reading list. RSR issued an apology, reported on by File 770, though it was undermined by its conter-arguments to the open letter.

A side issue that came up, mentioned by Bogi in eir tweets, was the inclusion of RSR in the sidebar of the official Hugo Award website as a “Third Party Recommendation” site. Renay of Lady Business pointed out the inequality with the way the Hugo admins have handled this part of the site. File 770 followed up with a response from one of the committee members who manages the website (see item 4), but Renay found the response disingenuous and out of touch.

Moving on to other news, Jessi Cole Jackson discusses fat representation in SFF.

In a guest post for the Australian Women Writers blog, Anna Spargo-Ryan talks about writing with a mental illness.

Uncanny Magazine is offering an editorial intern position and is looking for PoC, Native and Indigenous applicants.

Lackington’s are currently looking for works for their issue on the theme of Gothic. It looks like they’re taking a broad interpretation of the theme, but you’ll have to get in quick if you’re interested: the submissions window will close once they have enough acceptances. Word limit 5K.

Lightspeed Magazine have announced that they’ll be open to submissions 5-19 February, so start planning ahead! Word count 1.5-10K.

Goodreads have overhauled their giveaways. They will now cost a minimum of $120 USD for authors and publishers to run and they will be open to US residents only. Somehow this is going to “increase book discovery and reader reviews”. Perhaps Goodreads think international readers don’t exist.

Dahlia Adler tweets about the chilling effect this change by Goodreads will have on f/f romance, particularly in relation to YA.

Peter Ball examines what’s really going on at a successful book launch and the ways in which money messes with the writing process.

The Canberra Speculative Fiction Guild is running a crowdfunding campaign for their forthcoming anthology A Hand of Knaves. While the anthology itself is already funded, the CSFG’s goal is to pay their contributors at a higher rate. Rewards include some lovely artwork from Shauna O’Meara.

Barnes and Noble have also released their list of Best Science Fiction and Fantasy of 2017.