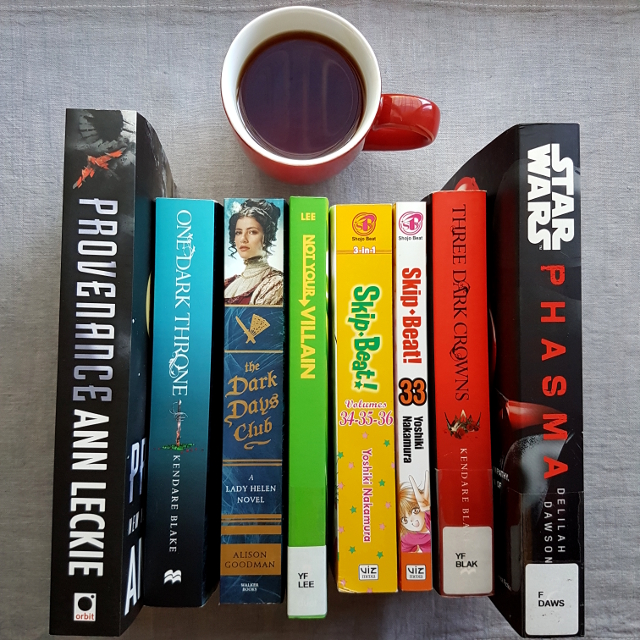 With two months left to go, I think I can give up on any vague hope I had of breaking even on Mt TBR this year. Though, to be fair, October is both birthday month and Conflux, so I didn’t really stand a chance.

Fortunately, my other reading goals are looking good. The first was to make at least one trip to the library every month. I’ve been well and truly exceeding that, which is another reason Mt TBR continues to grow. My second goal was to read at least one piece of fanfic every month. I’ve been finding it hard to make it past the bare minimum on this one, despite having plenty of great recs to pick from.

140-147. Skip Beat, Vols. 30-39 by Yoshiki Nakamura. A manga about a young girl who enters show biz to get revenge on her former crush and rock star childhood friend. I love it so much.

148. The Modern Woman’s Guide to Finding a Knight by Anna Klein. Reviewed here.

149. Leia: Princess of Alderaan by Claudia Gray. Star Wars tie-in (obvs.) about Princess Leia’s coming of age. Although interesting, it didn’t engage me much on an emotional level, since I was aware of the strict parameters around the story. However, Leia’s relationship with her parents and her new friends was really lovely.

150. Play by Kylie Scott. Second in the Stage Dive series of romance novels. When Anne’s room-mate moves out abruptly, leaving her with the rent, Anne is at her wits’ end. Famous drummer Mal Erikson steps in–on the condition Anne pretends to be his girlfriend. The story didn’t really work for me, mostly because I found it difficult to get a handle on Mal’s erratic personality.

153. Three Dark Crowns by Kendare Blake. YA fantasy. See below.

154. Lead by Kylie Scott. Third in the Stage Dive series of romance novels. Lead singer of Stage Dive, Jimmy, struggles with addiction. When his band gives him an ultimatum, he hires Lena as his assistant and sober companion. If you like romances with asshole heroes, this book is for you.

155. A Local Habitation by Seanan McGuire. Second in the October Daye series. When Toby goes to investigate the strange silence from her liege’s niece, she finds herself trapped in an office where the occupants are being murdered one by one. I loved the melding of magic and technology, and the dynamic pace of the story. However, the culprit was perhaps a bit obvious.

157. Unveiled by Courtney Milan. First book in the Turners series of m/f historical romance. When Lady Margaret Dalrymple loses everything to Ash Turner, she goes undercover as nurse to discover his weaknesses and regain her title. However, she soon finds herself charmed by his cheerful ruthlessness. A great start to the series. Milan always writes thoughtful, passionate romances and this is no exception.

158. Birthday Gift by Courtney Milan. A short story featuring two side characters from Unveiled, not intended as a stand-alone. An interesting scene, but doesn’t ultimately add much.

Lady Helen and the Dark Days Club by Alison Goodman

Escape from Cubicle Nation by Pamela Slim
Not Your Villain by C.B. Lee
Phasma by Delilah S. Dawson

Night is Young and the Music’s High by opalish. Follows on from Yuri!!! On Ice. A short story about Yuri’s struggles with handling press conferences and the fallout that ensues. Oh my goodness, it made me laugh.