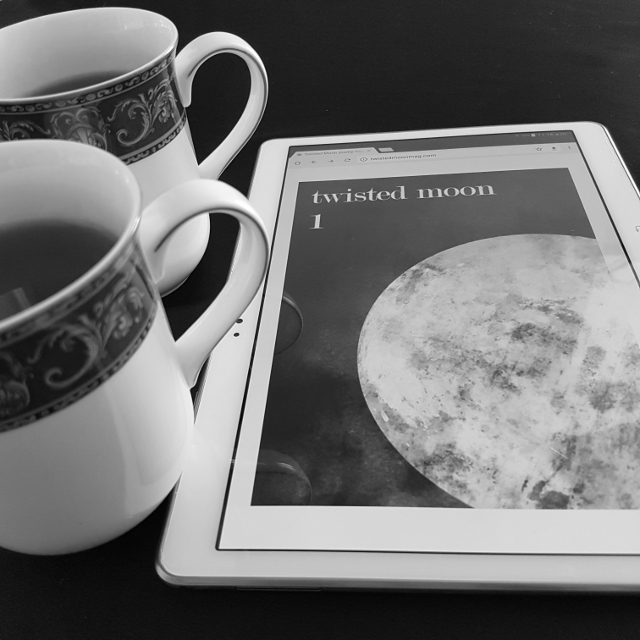 It’s no secret that I’m fond of reading speculative erotica. So, I was delighted when Twisted Moon Magazine launched their first issue. With the second issue due out on Friday (in time for the New Moon, natch), I’ve invited the editors to share a little about their publication.

What made us, the founders and editors of Twisted Moon Magazine, decide that the world of online poetry needed an even more niche publication?

We would be lying if we said it wasn’t partly because we all really like reading sexy poetry. We do. It’s pretty great. And aside from wanting a reason for people to send us their naughty writing, we came to the consensus that there wasn’t really anything out there which published the sort of work we were interested in reading. We imagine this is the way a lot of literary publications come about — the editors want to read a particular sort of thing, and being unable to find it in sufficient quantity or quality, they create a space for others to contribute and help expand the genre in question.

It’s probably worth taking a moment to discuss the idea of ‘speculative’ as a genre.

A quick glance at Wikipedia shows that speculative poetry/fiction has been defined by Suzette Haden Elgin as being “about a reality that is in some way different from the existing reality.” Fantasy and science fiction often overlap with the speculative genre for this reason, but neither fantasy/sci-fi nor Elgin’s definition are exhaustive. Strange Horizons commented in an article that what makes poetry speculative is a feeling and/or set of references. It’s an ‘I know it when I see it’ category, and while vague for the purposes of crafting some kind of formal definition, it’s not really necessary to have such a definition in order to get a feel for the speculative genre.

Speculative works are often relegated to their own publications because they can’t quite seem to find a home in more mainstream ‘literary’ magazines — not for lack of quality, but because they often have an element of the fantastical, whimsical, or uncanny that feels out of place next to works of stark realism or literary fiction. It’s these elements that make the speculative genre appealing to people wanting to tell stories which are either themselves outside of the mainstream, or which look at the world from outside the mainstream perspective. There is a great wealth of literary fiction that speaks to the human experience, and some of it is truly outstanding, but oftentimes the experiences on which such works focus are limited, and so are the ways in which those experiences can be described or conveyed.

The speculative genre encompasses elements of fantasy and science fiction, as mentioned before, but also elements of myth, horror, magic realism, fairy tales, and the supernatural. Many of the themes common in these elements are also common in Own Voices stories, which — for those who haven’t come across the term — are stories about diverse characters written by authors from that same diverse group. We want to be clear: we’re not saying that diverse stories and experiences are a form of fantasy, or that they cannot be told through literary fiction. We’re saying that the tropes common to speculative works — themes of transformation, otherness, identity, a quest for justice, the transient vs the permanent — are also often found in stories told from non-mainstream perspectives.

Those who don’t see themselves or their experiences reflected in conventional narratives are often drawn to unconventional narratives, such as those found in speculative fiction and poetry. The motifs and metaphors available in the genre are unique, and sometimes, they make it easier to speak plainly about the often undervalued stories of individual communities.

What, then, does eroticism have to do with it?

For one thing, diverse narratives are even more marginalised when it comes to talking about sex. Narratives created by outsiders about marginalised groups are often exploitative – predominantly created by people outside of the group being portrayed, and are rarely representative of the experiences of the people within that community. This is visible in mainstream long-fingernailed lesbian porn, or trans sex workers having to label themselves with slurs to find an audience, and many other areas besides. More accurate and representative narratives often don’t get the distribution or recognition they deserve, and the lack of accurate and diverse representation can cement marginalised groups as outsiders.

But the reality is that people have sex. All kinds of people and all kinds of sex, and once you move away from the restrictive spaces these people are talking about, we’re sharing and celebrating these forms of eroticism. The Western world has more or less gotten to a place where the social consciousness is aware that sexuality is a spectrum and there are more than three sexual positions, but the paradigm still needs to be to shifted away from ‘normative’ and ‘nonnormative’ sex, towards the understanding that all forms of sex are kind of weird and entirely worth writing about.

Poetry, and in particular speculative poetry, can create a space for this – a way to explore sexuality through new and different lenses, to celebrate the weird and find novel, interesting ways of expressing desire in all its forms. As queer women, Twisted Moon Magazine’s editors are very aware of how important it is to have diverse and accurate representations of queer sexuality. This is also applicable to other groups – people of colour and trans people (women especially) are often depicted by outsider groups as fetishised or hypersexual, while disabled people are often depicted as nonsexual. As far as we can, we hope to give folk the autonomy to depict their experiences and desires, and add to the range of Own Voices work out there.

Of course they can. We’re not trying to say that the incredibly niche genre that Twisted Moon Magazine has chosen to publish is the only way in which diverse stories can be told, nor that the only stories which can be told in that genre are diverse ones. We want so badly for there to be more literary fiction, and historical fiction, and non-fiction that dives beyond mainstream experiences. We’re also really into works that tell familiar stories in new and clever ways. There are so many, many ways to tell stories, and honestly, erotic speculative poetry is a pretty specific way.

But it’s a way we’re keen to explore and expand. We received more submissions when we opened than we expected to, and some of them blew us away. We all had ideas of the kind of stuff we wanted to read, and it’s been delightful to have those ideas expanded. It’s also worth noting that we had multiple authors telling us they were submitting poems they’d had since before Twisted Moon Magazine was started, which they’d never found a home for. We can’t claim to be a home for everyone – we know we’re exploring a very niche market – but we do at least try to be a warm, inviting bed.

We have been very encouraged by the response – a number of the poems we receive have included notes explaining that their poem is, for example, an exploration of gender, or of a poet’s experience of eroticism as an asexual person, or a response to recent politics. We are thrilled that poets feel able to use Twisted Moon Magazine as an avenue to explore these connections and get their work out into the world.

The point is that the genre allows for fun, sexy fantasy for its own sake, as well as for diverse and/or marginalised stories to be told in a way that is distinct from many other literary genres.