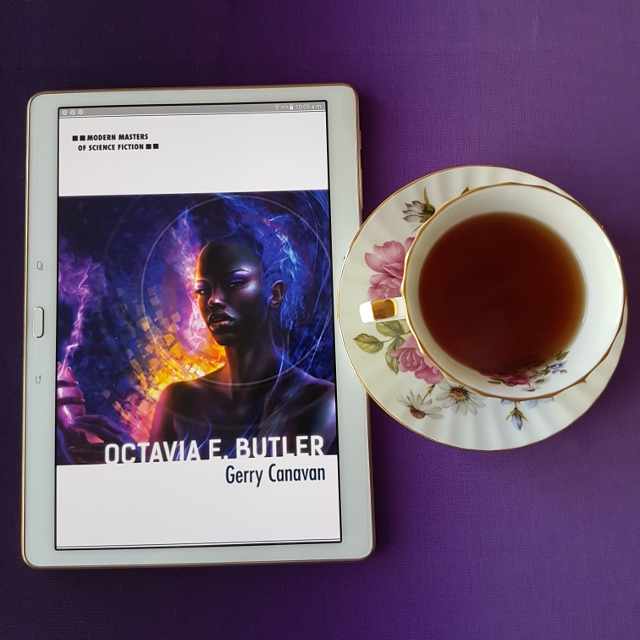 I began writing about power because I had so little, Octavia E. Butler once said. Butler’s life as an African American woman–an alien in American society and among science fiction writers–informed the powerful works that earned her an ardent readership and acclaim both inside and outside science fiction. Gerry Canavan offers a critical and holistic consideration of Butler’s career. Drawing on Butler’s personal papers, Canavan tracks the false starts, abandoned drafts, tireless rewrites, and real-life obstacles that fed Butler’s frustrations and launched her triumphs. Canavan departs from other studies to approach Butler first and foremost as a science fiction writer working within, responding to, and reacting against the genre’s particular canon. The result is an illuminating study of how an essential SF figure shaped themes, unconventional ideas, and an unflagging creative urge into brilliant works of fiction.

As with Letters to Tiptree, I went into this without having read any of Octavia Butler’s work (don’t worry, it’s on my list) and without even knowing a whole lot about her. I feel that approach didn’t work for me quite as well this time around.

I’d been expecting a biography. And Octavia E. Butler is a biography to some extent. However, it is equally concerned with analysing her work. Throughout the book, the author puts forward a theory unifying her work, looking in depth at her significant published and unpublished works and examining how they fit together. This necessarily reflects on her as a person–and in particular her views on humanity–but may not be satisfying for people looking for more details of her daily life. As someone who hasn’t read the stories being examined, I found it reasonably accessible, though I have no doubt it will hold much more meaning for those who have.

Despite the heavy focus on her stories, I still learned a lot about the person. I found the examination of her writing process particularly interesting. Learning about the way she would almost compulsively write many different variations of the same story was intriguing. Her preoccupation with the business side of writing was also something I think many writers will be able to related to, even if it was amplified by her poverty. This drive to make sales is also shown as being in conflict with what she felt was her artistic integrity; she needed to sell her stories but resented making changes in order to make them more palatable to publishers or the public. Unsurprisingly, she is portrayed as a deeply unhappy person, never satisfied.

The tone tends towards academic and may be considered dry by some. Indeed, the book started to drag a little after a while.

Nevertheless, I found it an interesting read. This will probably appeal to fans already familiar with Butler’s work.