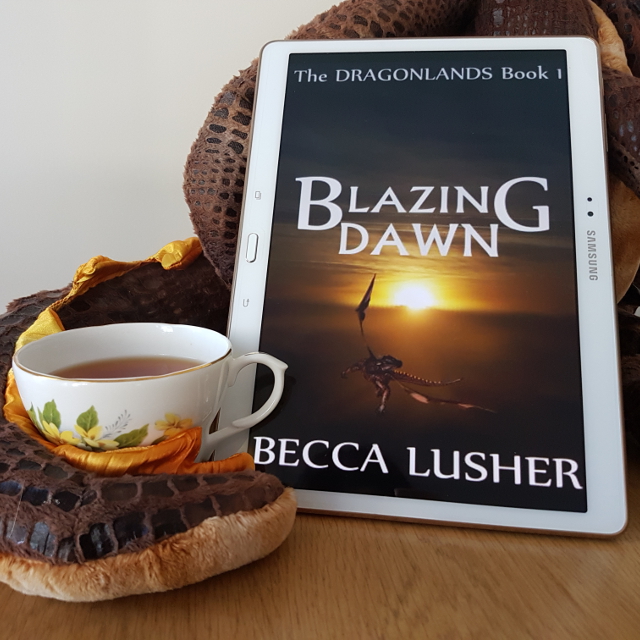 Nera has been fascinated by dragons all her life. Now, as a Rift Rider Lieutenant, her chance to see them up close has come. The appointment to spend five years as an escort to the human ambassador seems like the ultimate honour and gift, but the dragons she studied in training don’t come anywhere close to the reality awaiting her inside the Dragonlands.

Elder Khennik kin Blazeborn Clan Sunlord has no interest in humans. Thanks to the Cloud Curse that their kind brought down upon the Overworld, Khennik’s kin are close to losing their ancestral desert homelands forever. When he’s assigned as a delegate to the humans upon their arrival, he can’t believe his bad luck. Unlike some dragons, he has no wish for more power or responsibility, but he can’t seem to avoid collecting them. From his desperate kin to his nervous aide, right along to the useless humans, Khennik dreams of the day when he can return to his desert home.

Regardless of personal dreams and opinions, both humans and dragons are about to learn that they often have more in common than they might think or wish. And when trouble descends, the true friends you can count on have little to do with species — and everything to do with spirit.

If you’ve been following this blog for a while, you’ll know I’ve been enjoying Becca’s online serial Wingborn. After all, who doesn’t love Regency-inspired fantasy complete with giant eagles? Blazing Dawn is set in the same world, albeit at least a hundred years in the past. Dragons still roam the Overworld and women are still very much a part of the Rift Riders.

In fact, the women seem to outnumber the men in this particular contingent of the Rift Riders and there are a plethora of other female characters. One of the things that I enjoyed about the book was the way it opened with female friendship. Nera and Anhardyne are opposites in both looks and personality, but are nevertheless firm friends. So I was a little disappointed to see their friendship take a backseat to the action and romance.

But only a little disappointed. The romantic relationships run the gamut of pairings, with m/f, m/m and f/f all present–though it should be stated the m/f relationships tended to be the ones in the spotlight. However, it was the m/m relationship that I enjoyed the most and led to much squeeing over their adorableness. There was also a genderqueer dragon, which surprised and delighted me.

Nera and Khennik are both great characters. Nera is a shy introvert who has only recently made lieutenant. She prefers to let her friends have the spotlight. But get her doing what she loves–namely flying, acrobatics, movement and any combination of the three–and she shines. She’s a character who values duty and loyalty. So it’s no wonder the overly dour Khennik ends up being drawn to her. Now that the Cloud Curse has swallowed up his one joy in life, all that Khennik has left is his duty to his people and his determination to halt the curse. It’s no wonder he starts off as such a grumpy fellow. Watching him soften after a run-in with Nera was a treat.

The Overworld looks a little different in Blazing Dawn than it does in Wingborn. Not only are dragons still present, but their presence makes other things possible, such as airships. I enjoyed these changes and the way they build up the history of the world. This was reinforced by Khennik’s preoccupation with the Cloud Curse, a feature of the world which doesn’t get explored much in Wingborn.

Around the halfway mark, the story shifts its focus significantly in a way that didn’t entirely work for me. Until then, the focus had been very much on the romance and the relationship more generally between the humans and the dragons. The dragons stole the limelight in the second half. While it was interesting to see the humans realise their powerlessness in comparison, it wasn’t in keeping with the themes of equality and cooperation that had been present up until that point. I also found the change a little jarring, as the villain didn’t feel properly integrated with the rest of the story. One scene in particular got surprisingly dark.

However, I generally found Blazing Dawnto generally be a light, fun read with plenty of Lusher’s trademark banter. I’m looking forward to the sequel.