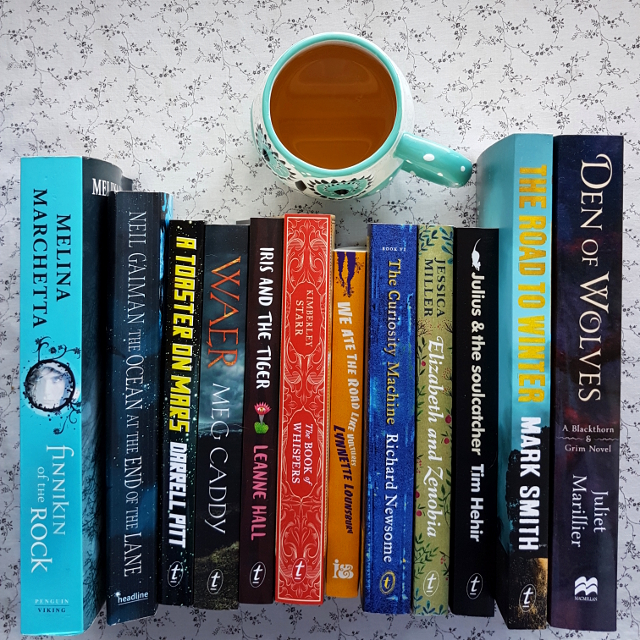 September is right in the middle of Birthday Season, that time of year when just about everyone I know has a birthday. There has been much cake and not nearly enough reading. Mt TBR is wildly out of control, mostly thanks to an influx of books for the Aurealis Awards. On one glorious morning, I had a box of eight (!) books arrive from Text Publishing (you can see them in the photo above).

My #ReadMyOwnDamnBooks stats continue to slip. My goal for the challenge was to make sure 60% of the books I read this year come from Mt TBR. I finished August at 50%. September takes me down to 48%.

75. The Wizardry of Jewish Women by Gillian Polack. Reviewed here.

76. Wingborn by Becca Lusher *. Okay, this is a bit of a cheat, since I read it in serial form before it was collected and released. A YA fantasy set in a Regency-inspired world. Mhysra is one of the legendary Wingborn, bonded to a giant eagle when they were born/hatched at the same time. All Mhysra wants to do is join the Rift Riders and defend her country. However, her high-born parents have other plans for her.

79. The Fire Sermon by Francesca Haig. A post-apocalyptic YA set after a nuclear disaster. Twin births are the norm with one, the Alpha, being fully able-bodied, and the Omega displaying a mutation or disability. The book explores oppression and sibling rivalry. It also does a great job with diverse representation, particularly with respect to disability.

We Ate the Road Like Vultures by Lynette Lounsbury

The Beauty of the Dance by Kirstie Olley
One Man Falls by Mark Healy
Julius and the Soulcatcher by Tim Hehir
Elizabeth and Zenobia by Jessica Miller
The Curiosity Machine by Richard Newsome
The Road to Winter by Mark Smith
The Book of Whispers by Kimberley Starr
Iris and the Tiger by Leanne Hall
Waer by Meg Caddy
A Toaster on Mars by Darrell Pitt
The Ocean at the End of the Lane by Neil Gaiman
Finnikin of the Rock by Melina Marchetta
Slaughterhouse 5 by Kurt Vonnegut
The Sorcerer of the Wildeeps by Kai Ashante Wilson
New Ceres Nights edited by Alisa Krasnostein and Tehani Wessely
Half-off Ragnarok by Seanan McGuire
Rat City by Ree Kimberley
Beyond Carousel by Brendan Ritchie
Argenterra by Donna Maree Hanson
Octavia E. Butler by Gerry Canavan

I didn’t do any online reading this month.