You are here: Home > Bound by Alan Baxter

By Elizabeth on October 3, 2016 in Book Reviews 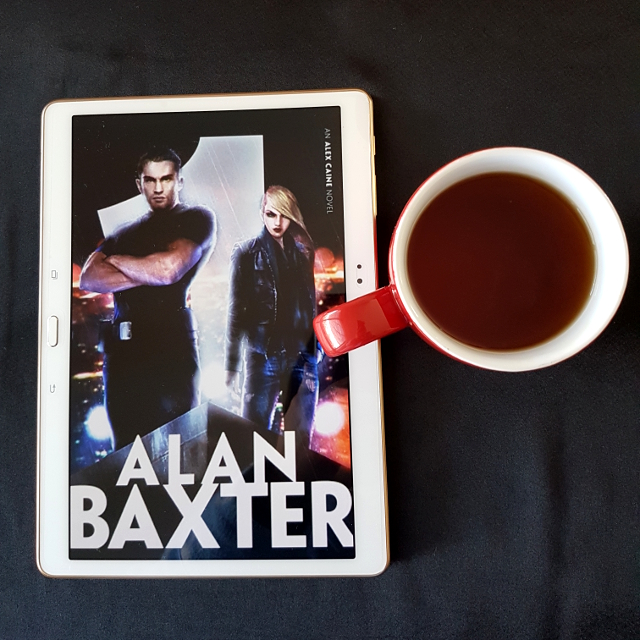 Alex Caine is a martial artist fighting in illegal cage matches. His powerful secret weapon is an unnatural vision that allows him to see his opponents’ moves before they know their intentions themselves.

An enigmatic Englishman, Patrick Welby, approaches Alex after a fight and reveals, ‘I know your secret.’ Welby shows Alex how to unleash a breathtaking realm of magic and power, drawing him into a mind-bending adventure beyond his control. And control is something Alex values above all else… A cursed grimoire binds Alex to Uthentia, a chaotic Fey godling, who leads him towards chaos and murder, an urge Alex finds harder and harder to resist.

Befriended by Silhouette, a monstrous Kin beauty, Alex sets out to recover the only things that will free him – the shards of the Darak. But that powerful stone also has the potential to unleash a catastrophe which could mean the end of the world as we know it.

Bound is equal parts contemporary fantasy and action-packed thriller. In this dark and gritty version of our world, magic exists under the noses of ordinary people. Even fighter Alex Caine doesn’t realise at first that his ability to read the aura (or ‘shades’) of his opponents and predict their movements is a magical one. Instead, he thinks it’s a result of his hard training and discipline as a martial artist. I liked this angle, fitting in as it does with some of the more esoteric philosophies of martial arts.

When approached by an English magician, Alex soon discovers that he can not only read people but that his ability also extends to deciphering magical texts. Indeed, he’s more talented at it than most, which is the very reason he’s sought out. The idea of a martial artist being sought out for his ability to read is a wonderful disruption of stereotypes that delighted me.

However, the book succumbs to other stereotypes that I found disappointing. The female characters in particular lacked agency and were almost without exception sex objects. Silhouette and Sparks get the most page time and both functioned (willingly) as a way for the male characters to release tension through sex. The book gets some points for including gay and POC characters but this is undermined by almost all of them being killed off. To be fair, the story is full of violence and racks up quite the body count.

The fight sequences are a definite strength of the book. The author has extensive martial arts experience and it shows. Fights are short and brutal, not left to drag out unrealistically. The choreography is well thought-out and the characters’ mental states play an important part. I particularly enjoyed Alex’s fight with the Subcontractor because even when desperate and caught off-guard, Alex fought with intelligence and came up with a useful strategy.

I found the middle of the story rather repetitive. Alex feels Uthentia starts to get the better of him, has trouble keeping violent impulses in check, blows off some steam by having sex with Silhouette and then is back to worrying about staying in control. It works to illustrate the constant background struggle, but it got somewhat boring and I was never really convinced he was in any danger of losing.

So while not my cup of tea, Bound is likely to appeal to anyone who loves plot-driven thrillers and gritty fantasy.