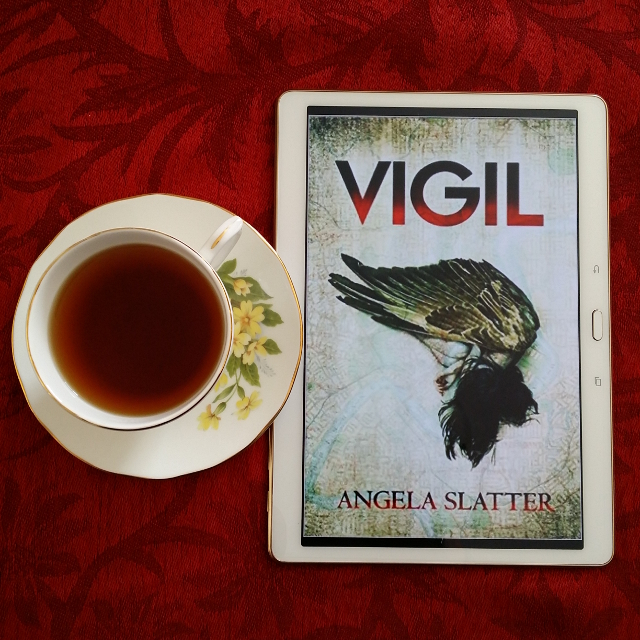 Verity Fassbinder has her feet in two worlds. The daughter of one human and one Weyrd parent, she has very little power herself, but does claim unusual strength – and the ability to walk between us and the other – as a couple of her talents. As such a rarity, she is charged with keeping the peace between both races, and ensuring the Weyrd remain hidden from us.

But now Sirens are dying, illegal wine made from the tears of human children is for sale – and in the hands of those Weyrd who hold with the old ways – and someone has released an unknown and terrifyingly destructive force on the streets of Brisbane.

And Verity must investigate – or risk ancient forces carving our world apart.

Angela Slatter has made quite a name for herself with her short stories. She’s had a number of collections published and her novella Of Sorrows and Such was released by Tor.com last year. Vigil is her first full-length novel.

It sits firmly in the realm of urban fantasy. Verity Fassbinder is your typical strong female protagonist–literally. She has super strength, super snark, an absent family and problems with authority. Being half human and half Weyrd, she never quite belongs in either world. This heritage makes her useful to the Weyrd’s ruling council, who employ her as their troubleshooter. After all, not all of the Weyrd are content to live quiet lives and avoid the attention of the (more numerous, more panicky) humans. Verity often finds herself in the position of having to advocate for the Normals (as the humans are referred to), despite never really having lived a normal life.

The Weyrd is a collective term for the supernatural creatures of the world–the vampires, the shapechangers, the sirens and more. There’s a wonderful mishmash of dark fairytale and mythology that’s likely to appeal to fans of Supernatural. A few of the usual suspects make appearances alongside others less common and a few that defy classification. None of them are particularly fluffy. A particular highlight for me was the taxonomy of sirens, which struck me as being well thought out.

I was also delighted to find this urban fantasy set in Brisbane. Keri Arthur aside, it is so rare to see novel-length fantasy set in Australia and I would love to see more of it. I was a little concerned at first that Slatter’s familiarity with the locale might assume the same level of familiarity on the reader’s part. However, things settled down after the prologue and I enjoyed the wry observations about Brisbane’s seasons and propensity for flooding.

One small thing I found irritating was Slatter’s inability to refer to the city by its name. Instead, it was always ‘Brisneyland’, which–while it may have been a nod to the short story that was Vigil‘s precursor–grew tiresome after a while. Even changing it to ‘Brisvegas’ (as it gets called in some of the southern states) would have been a welcome variety.

Another quibble I had was with David, Verity’s love interest. In steering away from the strong romance elements often associated with urban fantasy, I feel Slatter went too much in the opposite direction. Glossing over the development of Verity and David’s relationship left David as less of a character than a cipher standing in for a particular way of life. It deprived the relationship of the emotional weight it needed.

However, it does give a chance for Verity’s found family to take more of the spotlight. The centre of this family is Mel and her young daughter Lizzie, two Normals who live next door to Verity. Lizzie frequently ducks through gaps in the fence to visit Verity and it’s clear that, although Verity misses her birthday party in the opening chapter, there’s nothing they wouldn’t do for each other. In fact, Vigil is delightfully full of female characters and female friendships.

One last problem I had with the story was the magical curing of several significant injuries and chronic illnesses. While I can understand the narrative reasoning for these, it seems to be a bit of an abelist attitude and I feel that in most cases keeping them would have led to a more interesting story.

Despite this, I found Vigil a darkly fun read that hooked me quickly and reeled me in. I can’t wait for the sequel.

5 thoughts on “Vigil by Angela Slatter”