Contact was the Australian Sci-fi Convention (or Natcon) for 2016 and took place in Brisbane over 25-28 March. The theme this year was Make Contact, tying into the fact that Brisbane hasn’t hosted a Natcon for around a decade. Special guests were Ben Aaronovitch, author of the Peter Grant/Rivers of London series; Jill Pantozzi, former Editor-in-Chief of the Mary Sue; Keri Arthur, author of Fireborn (and many other books); and Maria Lewis, author of Who’s Afraid?  As is always the case, there was a lot of good programming to see, so I had to split my report into two parts. The second part will be posted next Monday.

I flew in early on Friday to attend a workshop run by Kate Cuthbert on editing fiction. Kate is the Managing Editor of Escape Publishing, Halequin Australia’s digital arm, and is thus responsible for adding quite a few books to my Mt TBR. The workshop ran for seven hours (including lunch) and took a very thorough look at what was involved in structural editing. Using examples from film, Kate discussed plot, characters, themes, pacing, dialogue, voice and point of view. She delved into issues a structural editor should be looking for in relation to each of these elements and the importance of approaching a manuscript from the perspective of a reader as well as an editor. As she said, “You can break any rule, as long as you break it like a boss.”

It was a pretty epic start to the convention. Combined with my early starting time, it left me so worn out that I ended up taking a nap and missing the opening ceremony. However, I was awake and back on my feet for the Aurealis Awards. Nominees and fans got dressed to the nines, then gathered at the bar for a cocktail party before the ceremony started. It was a great chance to catch up with the people who had arrived while I was attending the workshop.

Marianne de Pierres and Rowena Cory Daniells made charming hosts, promising not to drive the ceremony off a cliff after taking a Thelma-and-Loiuse-style selfie. The pair have done amazing work in creating and supporting the spec-fic scene in Queensland, so it was nice to see that recognised.

As for the awards, a full list of winners can be found on the Aurealis website. Sean Williams got a lot of exercise getting on and off the stage to accept awards on his own behalf and on behalf of others, no doubt needing an extra suitcase just to get them all home. Kate Forsyth made sure the judges for the inaugural Sara Douglass Book Series award received several rounds of applause for their work in reading the 196 novels that made up the category. I’m ashamed to say the winner, Glenda Larke’s The Watergivers series, has been sitting on my Mt TBR for some time. I’m definitely bumping it up the list. 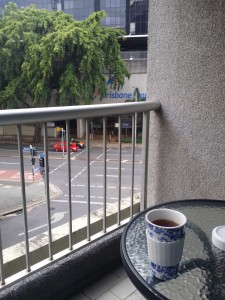 Saturday kicked off with a strong cup of tea. I was glad I’d had the foresight to pack my travel mug because it served as my lifeline throughout the convention. The first place to which it accompanied me was Keri Arthur’s Guest of Honour talk. Keri was refreshingly frank about the business side of her writing and the struggles she has had to deal with over the course of her career. It was particularly interesting to hear about how events in the industry have affected her career, such as the merger of publishing houses. Three mistakes she felt she had made in her career were:

Saturday was the day for Guest of Honour talks, with Ben Aaronovitch speaking in the afternoon. “I am a writer,” he began, “and I love saying that.” Ben proved to be just as entertaining in person as in print, and spoke off-the-cuff because he claimed that pre-written speeches bored him. Having had experience with writing across a number of different forms, he claimed to like writing comics best because the artist is the one that does all the hard work. Nevertheless, he plans to continue writing novels for the Peter Grant/Rivers of London series for the rest of his life. The series gets a lot of attention for its diverse cast, but Ben refuses to sit on panels on diversity. “The only way I could be less diverse was if I was American,” he said. He claimed Peter Grant’s African heritage was less difficult to write than the fact Peter was born three years after Return of the Jedi was released. 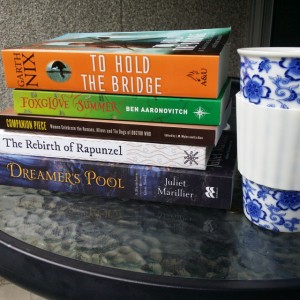 Of course, no convention is complete without a trip to the dealers room. I emerged with copies of:

Foxglove Summer by Ben Aaronovitch. Signed, of course!
Dreamer’s Pool by Juliet Marillier. I’ve already read this, but needed a copy of my own.
The Rebirth of Rapunzel by Kate Forsyth. Launched by Fablecroft Publishing at the convention.
Companion Piece edited by L.M. Myles & Liz Barr
To Hold the Bridge by Garth Nix. Winner of the Aurealis Award for Best Collection and the only Old Kingdom book I was missing.
The Opposite of Life by Narelle M. Harris

Please join me again next week when I shall briefly discuss some of the panels I attended (so much diversity!), the Ditmar Awards and introduce you to a new friend who came home with me.